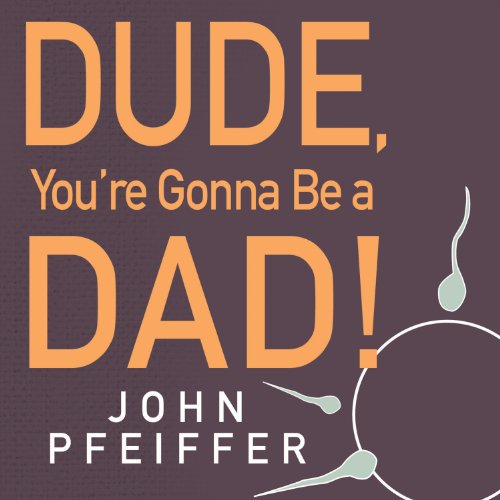 Dude, You're Gonna Be a Dad!

By: John Pfeiffer
Narrated by: Mike Chamberlain
Try for $0.00

There are approximately 3,712 ways for a guy to look stupid during pregnancy - this book's here to help you avoid all (most) of them. And here's your first hint: Focus on what you can be doing for her rather than what's happening to her.

She's pregnant. She knows that. You know that. And her one 152 baby books tell her exactly what she can expect. Your job is to learn what you can do between the stick turning blue and the drive to the delivery room to make the next nine months go as smoothly as possible. That's where John Pfeiffer steps in.

Like any good coach, he's been through it. He's dealt with the morning sickness and doctor visits, painting the baby's nursery and packing the overnight bag, choosing a name, hospital, and the color of the car-seat cover. All the while he remained positive and responsive - there with a "You're beautiful" when necessary - but assertive during the decision-making process. (He didn't want to wind up with a kid named Percy.) And now it's your turn. She might be having the baby, but you have plenty of responsibilities.

What listeners say about Dude, You're Gonna Be a Dad!

A fun spirited, yet lacking book for the everyman

I enjoyed the quips and funny lists, but ultimately it came up short in substance. The book didn't really mention much that isn't total common sense. I enjoyed it, but not for its intellectual value.

What could John Pfeiffer have done to make this a more enjoyable book for you?

Perhaps add more value and have fewer lists. The lists became a little monotonous although they were a good way to organize thoughts. I would have appreciated it if it spent more time going over terms and conditions that would make it easier for men to communicate during doctors visits and with the well educated fairer sex.

The ending was marvelous. It was a first hand account of the experience a dad had during the birth of his child. It really helped me visualize what I was in for. I doubt you will find anything quite like it in any other book.

Do you think Dude, You're Gonna Be a Dad! needs a follow-up book? Why or why not?

A follow up book would not be necessary since it was designed and succeeds at being an abbreviated 'crash course' with the big details.

If you aren't too into audiobooks or big, lofty explanations, this is probably a good listen. It is a quick listen and accomplishes everything it set out to do. Perhaps I am being harsh on a book that admittedly has a title that should have indicated to me the concept of the book, but overall I found the subject matter a little sporadic and the explanations watered down. I can't recommend it enthusiastically, but I wouldn't encourage new fathers to be to avoid it either.

condescending. sexist. simplistic. if you find bro humor funny and want an extremely simple book to introduce concepts, this could be for you. if you want more complete information, try another. the beat part is that the book was short.

If you've read other dad books, this one pales.

This book gives you similar information to what you get in other soon-to-be dad books. Unfortunately, this book seems intended for soon-to-be dads that are content with statements like, "It's just a woman thing," or, "Don't worry because you'll never understand." It's not that it's offensive necessarily, but rather that it's so simplistic and incurious that it's really not worth reading when you compare it to similar books.

Mostly bad jokes with a few sprinkles of advice

I had a couple dads recommend this book but I really can't recommend it myself. The book is filled with constant attempts at jokes with little time spent on actual advice. Most of the jokes fall flat, and aren't funny. I also found that the author took an extreme bias in writing this towards men that are apparently unable to take care of themselves or others. The book takes the position that most men can't or don't; cook, clean, do laundry, or help at all around the house. My wife and I split up these duties and have for years. I don't need to be told to "help out around the house once in a while" with a bunch of bad jokes. Only redeeming factor was Mike Chamberlain. He has a great voice and he did a great job trying to salvage this book.

BMP 3 letters I hope you never hear again for the rest of my life put together this book is so repetitive boring and shows nothing that is new it tries to be funny but the jokes fall flat and are very very cliche I wouldn't recommend this book to anyone if I could get a refund I would in the narrator is awful. Do yourself a favor and stay away. I had to take a 3 month break from this book because it was so annoying

Good for fathers to be

I enjoyed the upbeat nature of the reader and the helpful information provided. This is a must for any fathers to be to listen too to gain more knowledge on whats going on during the pregnancy of their wife.

somehow it finds a way to offend men and women. making me seem like worthless idiots and women easily angered hot heads. this is obviously written by a man with a bad relationship with everyone in his life.

Few specifics, 1 hour of listening may equal 5min of actionable advice. This is a novelty gift from your “bro” friends, not something you should spend money on for real advice.

As a concept great book, I am 21 year old male and just found out my girlfriend is pregnant super shocked at first then excitement. So Of course I wanted to take the initiative and learn all I could this books seemed great for young first time dads, but the advice was subpar, it seemed to be more for your typical movie troupe frat bros and teaching them to just be a decent person to a significant other. If you have absolutely no clue on how to problem solve and communicate to your partner and are becoming a dad for the first time this books for you