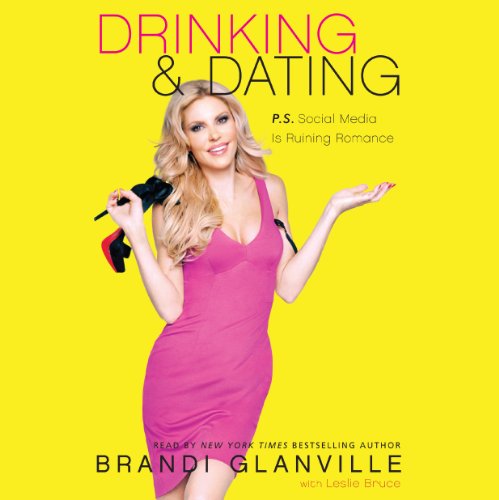 On the heels of her New York Times best-selling book Drinking and Tweeting, Real Housewives of Beverly Hills star Brandi Glanville takes readers on a wild ride through her dating life in this highly entertaining relationship book.

Drinking and Dating chronicles Glanville’s misadventures stumbling through today’s dating world. From social media blunders to bedroom escapades, Brandi withholds nothing. Each chapter is inspired by a relationship encounter she has had since her sensational divorce from actor Eddie Cibrian. Hilarious, surprising, vulnerable, and outspoken, Glanville’s unexpected take on dating after heartbreak - and life in general - is as unique as she is. Just like Brandi herself, Drinking and Dating is sexy, funny, and eyebrow-raising.

What listeners say about Drinking and Dating

I usually like her, but this book was pointless

I usually enjoy the authors outspoken daring attitude but this book was not fun and although I can relate to being betrayed she needs to not include the country singer in her books so much. No need to give these people validation. It almost seemed like a grown person trying to hard to be "cool" and how she slept with half of LA. Didn't enjoy it.

What could Brandi Glanville have done to make this a more enjoyable book for you?

What would have made Drinking and Dating better?

Less hashtags and not so many f words


Has Drinking and Dating turned you off from other books in this genre?

She is a terrible writer. The reason this book is on the New York list is because she is a housewife.

No I wish I had never listen to it.

It is to bad that good writers can not get published yet some like Brandia can. The book is garbage.

Time I'll never get back... dont waste your money.

I am a Brandi fan, but listening to this book was like nails on a chalkboard. I give her props for narrating it herself but could possibly have stomached it a little longer if someone else had done it for her. She has a "lithp" that gets a pretty irratating, but moreso are her frequent odddly timed pauses. The non stop hashtags were the icing on the cake. I can't even stand them on-line, let alone hearing them be read by Brandi.

What was most disappointing about Brandi Glanville’s story?

I guess I shouldn't be surprised by the actual storyline, afterall, this is someone famous simply for being on a reality tv show, however, I thought she'd be more... "real". She is supposed to be known for her "take me as I am" attitude but in myopinion she just came accross conceited, materialistic and incredible arrogant. I am officially on team Leanne from here on out.

Would you be willing to try another one of Brandi Glanville’s performances?

NEVER in a million years. I may not even be able to watch RHOBH anymore.

If you could play editor, what scene or scenes would you have cut from Drinking and Dating?

All of them. I hope no one is actually reading this book thinking they will take anything other than low self esteem away from it. And maybe how to play games with men.

If you really want to read this book, I suggest doing just that... read it. Because listening was completely maddening. I bought this thinking it would be a good distraction during my commute to work on a train. Wrong. All it did was make me want to pull my hair out. I finally gave up after making it about half way through.

Brandi- Love you girl, but narrating is not your cup of tea.

The Perfect Parody of the American Way of Life

I used to think perfection was something hard to attain. But we have proven, in our own San Fernando Valley that we know how to live a perfectly idiotic, perfectly empty life – and then we know how to brag about it. As this book proves.

America became a child-centered society – where the children were the center of the family – and assumed the rest of the world (including their parents) existed only to please them.

I watched this in amazement – and could have sworn I heard the parents telling their children “Do not be anything!” Whether they said this or not – this is what their children became – nothing. To the complete satisfaction of their parents.

This book was okay. The hash tags become pretty annoying. Overall, I wouldn’t listen to it again.

I bought thinking it would be a light and sometimes funny listen but it was so childish and immature I couldn't finish. All the #'s were annoying.

I love this woman!!

it's refreshing to hear someone speaking their truth. I moved from Hollywood to Sacramento!!

it is so much fun to listen to her read her books. She really gets her point across while being very entertaining. I hope she is working on her next book

I wasted a credit on this?!

I lasted 12 minutes and even that is probably generous. Might be more tolerable if she'd stop speaking in hashtags or using so much profanity. Not sure what I was expecting since what you see with Brandi is pretty much what you get. I feel like I need to go clean my ears out now.

Detailed, well written. Love her realism of how life actually is. She’s not afraid to be honest and I respect that

In one word Excellent.

So insightful and very funny. Well worth the read aka listen. Should be required reading for Men and Women.

So funny you'll pee your pants!

Where does Drinking and Dating rank among all the audiobooks you’ve listened to so far?

Can't as it's an autobiography type and for entertainment value, you wouldn't need to anyway!

The parts about dating after divorce

Brandi is so funny and I would say every woman and most men will relate to her story, filter free as always she's bloomin hilarious 😂