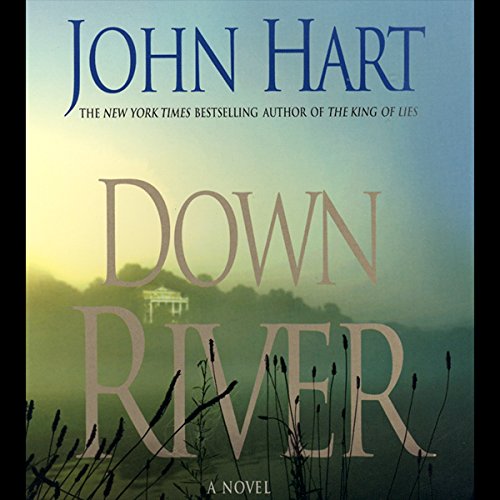 Adam Chase has spent the last five years in New York City trying to erase his worst memories and the scorn and abandonment of his family. Then a phone call from his best friend awakens in him a torrent of emotion and pain. Having left North Carolina and its red soil for good, he never thought returning would be easy, and being remembered as a murderer doesn't help much. Within this small Southern town, John Hart explores the lengths to which people will go for money, family, and pure greed - and whether or not forgiveness is ever attainable.
©2007 John Hart (P)2007 Audio Renaissance, a division of Holtzbrinck Publishers LLC
Psychological Suspense
Show more Show less

"Richly atmospheric....This book should settle once and for all the question of whether thrillers and mysteries can also be literature." ( Publishers Weekly)

What listeners say about Down River

If I heard that phrase once, I heard it 50 times in this book. Based on the (mostly) glowing reviews, I really thought I was in for a treat- but it lost me about a third of the way through.

I want to give other's a true impression of what I got out of this book--even though I appear to me in the minority side of the isle so far.

Yes, it's a decent story with a lot of characters and situations- but it does seem the book would have been better if some of the situations were developed further, and given us a more in depth feel for the people. As some other's have said --I really never came to care about any of them.

Far from all of the characters being "strong southern men and women"- most of them were weak, cowardly, bullies, and liars. Secrets and personal motivations come out almost as afterthoughts.

The main character, Adam, is a decent person who wants to do the right thing, but he just didn't ring true to me. His love interest, Robin (a local cop) comes across as flighty and unstable. How many times was she going to lead Adam along to gain information from him for the police investigation --and then say "gee I'm sorry- but I'm a cop first. He forgives her, and then it goes on to happen again (much like Lucy pulling the football away from Charlie Brown.)

One last thing- did anyone think they were listening to a poor imitation of Will Patton reading a James Lee Burke novel? At times I got the impression that Hart had tried to copy Burke's natural grasp of meaningful prose-- or may it was just me.

Hart is a relatively new author, and I admit this is the first book I have listened to by him. I'm not sure I will give another one a try or not--certainly a lot of people seem to enjoy him.

Down River is a finalist in my personal "World's Dumbest Book" compeitition. There is not one believeable character in it, the plot is little more than an amalgamation of obvious misdirections from the author. Just pick the least likely outcome in every situation and you will know what will happen next. The narrator runs around the book bossing everyone around and beating people up, making dopey choices that are positioned as coming from some saintly moral high ground. Amazingly, all the characters generally follow his orders as he pursues his ridiculous "investigation" untils it lands on its deliberately unlikely conclusion. I'd have to ruin the plot for you to shoot this book up any further. Just thought my fellow audible friends needed a little counterpoint to the inexplicable pile of 5 star reviews this stinker has gotten.

I listen to a lot of audiobooks, and this is probably the best one I've ever listened to.

DOWN RIVER is a very compelling crime drama, with great writing, dialogue and character depth. A tightly paced thriller, but one that thoroughly explores tragic family and personal relationships. Like a Southern soap opera, but don't let that scare you. Superb narration by Scott Sowers, he does a great job with all the character voices.

Try this one, you won't regret it. I loved it, and thought it well worth the money.

No! The story had too many negative events and outcomes.

Do you think Down River needs a follow-up book? Why or why not?

No. This family was toooo disfunctional to continue the story.

Purchased this book because of a good rating but don't agree with that opinion.

I wish I could go back and change some ratings

Now that I have read this, a genuine five-star book narrated by a five-star narrator, I feel bad about those five-star ratings I gave several other books in the same genre.

I love plots like this: tight, intricate, and credible. There are no dead-ends or red herrings. Everything that happens happens for a reason, and Hart unfolds the reasons with tight narration and dialog. There is a mystery here that runs deep in Adam Chase's family's past, with secret relationships and hidden motives. As the tale was spun I felt several times that I had it figured out, but I didn't, not until the end. More clever readers than I probably will see what's coming - my wife always does - but I was continually surprised and greatly entertained.

The characters are all the strong southern men and women that actually do populate large parts of North Carolina. The way they're portrayed by Hart reminded me of works about the Scots-Irish in the South, particularly Jim Webb's "Born Fighting". The characters' qualities are brought out by Hart's artistry, aided hugely by Scott Sowers' rendition. I've listened to a lot of Scott's narrations before, and this to me was his best ever. He's a Virginian himself, and he slips into North Carolina speech naturally. No drawling, just the accent and clear enunciation of the Piedmont.

This book was my fourth pick made by looking through Audible's list of Edgar winners. It's turning out that even-numbered picks were successes, odd-numbered ones not so much. My aim was to discover new mystery and suspense authors and gorge on their works. Sadly, Hart's output to-date is only four books. But what a rich feast it's turning out to be!

On a level with Scott Turow? You bet.

I should have lowered expectations

When I see awards for a book. I assume that there is some substance to it. The book is long drawn out with scenerios that are hard to believe. By the end of the book - I didn't even care who did it. Scott Sowers has a good voice - But not a great narrator. Maybe he'll get better? I don't like writing bad reviews. I love to listen and read. I wanted this book to be good because I read some reviews for his other book - But I don't think I can get it now.

This is one of the few mysteries that kept me guessing till the end. It is a tragic tale of a wealthy, unforgiving family. I found myself lost in it, but not pleasantly, there is nothing pleasant about this family. That is my only reason for giving it 4stars rather than 5. I admit i like to fall in love with the characters and this story feels too much like real family.

One surprise is that i did fall in love with the setting. It is set in the small town of Salisbury, NC which most travelers on I 85 know because it has the only Starbucks between Greensboro and Charlotte. Yet Salisbury is the home of one the largest grocery chains, Food Lion, and Cheerwine, a hugely popular soft drink in the Carolinas. I believe the author is the stepson of one of the wealthier families there. I say all this because I am guilty of knowing little or nothing about this historical gem not 45 miles from my door. Having read this novel, I plan to learn more and experience more of Salisbury.

The author obviously has a great deal of knowledge of the local police and sheriff departments procedures as well as the politics and geography of the city. This gives the story a reality I've rarely experienced.

A final note regarding the author's talent of building characters. He does a masterful job of having each character actually act his or her age. For example, the hero is a tough, smart 28 year old, but totally as self absorbed and immature as most are today. His mentor is in his early 60's, not as smart, but wise and forgiving. It's a great contrast revealed in multiple characters throughout the story.

So it's a yes! Well worth your time.

I came close to giving this book five stars but decided not to because of the absence of a character you could feel good about. Try as I might, I couldn't make myself like Adam. The author combined the elements of an intriguing tragedy with mystery and kept me involved for the entire read. Well worth a credit.

I hadn't read anything by John Hart before, but I'm glad I downloaded this book. His charater's personalities were strong and interesting. The interactions he wrote about couldn't have been more on. The storyline was interesting and believable. I truly enjoyed listening to this book. I am going back to read his first book and look forward to more from him.

"Down River", the 2008 Edgar Award Winner, is almost flawless. There are no requisite stumbles in the forest to give the killer/stalker/bad-guy time to catch up. I found the entire book, from beginning to end, thoughtful and enlightening. The conversational dialogue felt a bit awkward at first, because it was on-topic and off-topic and then on topic again, but I slowly began to realize that that is actually the way in which we script our speech in everyday conversations.

The story is compelling and keeps you guessing, but though a story may be excellent, for audiobooks, the narration is equally important. It was quite difficult to become accustomed to the deep southern accents, which were LESS "sweet tea and junipers" AND MORE "I am lost deep in the south and I really don't want to stop and ask Jed, the filling station attendant, for directions" AND (as I pass Jed and watch him through my rearview mirror) "Oh, no, Jed, the filling station attendant, is still watching me. Ok, Ok, deep breaths, he is just curious." AND "I just saw Jed wipe his hands on an oil-soaked rag and now, ok, (crossing myself) ok, he's, ok, he's turning, he is turning and he is, yes, Jed is walking, walking...walking back inside! We are outta here!" But I digress.

Listening to the dialect was difficult only because I have only been exposed to audiobooks in which the main narration, if not all of the characters, sounds like what I hear everyday in TV land, which means that the voices are sans any discernible accent except "American". Though the voices of the characters never became easy on my ears, the characters, themselves, were so endearing and expressed such palatable emotions and I became so immersed in the mysteries that I was actually unable to stop listening. Great Job!!