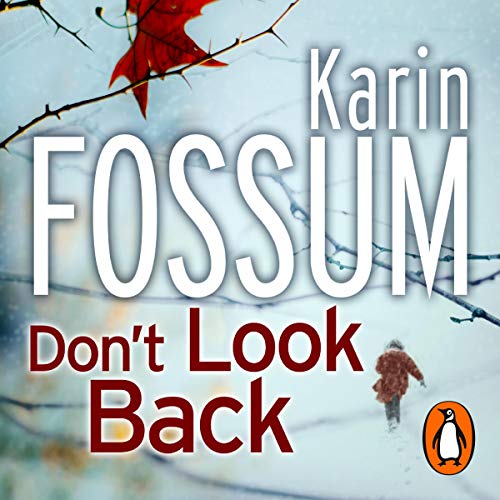 By: Karin Fossum
Narrated by: David Rintoul
Try for $0.00

Beneath the imposing Kollen Mountain lies a small village where the children run in and out of one another's houses and play unafraid in the streets. But the sleepy village is like a pond through which not enough water runs - beneath the surface it is beginning to stagnate. When a naked body is found by the lake at the top of the mountain, its seeming tranquillity is disturbed forever. Enter Inspector Sejer, a tough, no-nonsense policeman whose own life is tinged by sadness. As the suspense builds, and the list of suspects grows, Sejer's determination to discover the truth leads him to peel away layer upon layer of distrust and lies in this tiny community where apparently normal family ties hide dark secrets. Critically acclaimed across Europe, Karin Fossum's novels evoke a world that is terrifyingly familiar. Don't Look back introduces the tough, ethical Inspector Sejer to British readers.

What listeners say about Don't Look Back

This was the first Karin Fossum book I've read and I enjoyed it so much I'm going to give the others a go. A very enjoyable, very well written book. If you enjoy Scandinavian crime fiction and writers such as Henning Mankell, you will like this - it has the Inspector Wallender novels feel about it. It has that calm aura whilst being engrossing. And David Rintoul is an excellent narrator - very engaging. He has that valuable attribute of making it more like hearing a play than listening to someone reading a book.

An ok listen but nothing special

This was ok to pass the time in the car and it kept me going even though around half way through I had already figured it out. Once I had finished though I felt like I probably could have passed the time with a better book. This novel just didn't really stand out for me in any way. It was all rather bland and it also doesn't convey that sense of place that I tend to expect from Nordic crime fiction. Aside from the Characters names it could have been any village in England. I would give it two and a half stars if I could. Not bad enough for two stars (disliked it) but not really up there with the three star reads. David Rintoul did a good job with the narration though and I will look out to see what else he has narrated.

Thoroughly enjoyed reading this second novel in the Inspector Sejer series. I particularly like David Rintoul's narration, and I expect to make my way through the whole series now!
This book began with a storyline which was emerging at the end of the first novel and which was peripheral but important background to the plot. The characters are interesting and realistic, as is the storyline. There was little political interest in the story apart from an understanding that the police and pathology services are understaffed and underresourced. Although there were many surprises, it always seemed believable. Recommend.

Interesting but not Henning Mankell

I was looking for another novel to rival Henning Mankell and came upon Karin Fossum. I enjoyed the read and the characters and story were fairly interesting but I would not say that I loved the book I have since read other novels by same author with similar effect While they are enjoyable they are no where near Henning Mankell. The narration was good and fitted with the book story.

Again Karin Fossum adds a pyschological element to her police thriller. Again there were many twists and turns that kept you on the edge of your seat

Let down by the end

I was looking for another series now that I have come to the end of the fab Wallander series. This doesn't quite match up, but doesn't do a bad job of trying.
Unfortunately it succumbed to a typical ending, which I won't describe, but it disappointed me, hence the three stars for 'story'.

I really loved this so beautifully read by David Rintoul and well written. Half way through I thought it was a bit repetitive, but I hung in and found I just loved it.