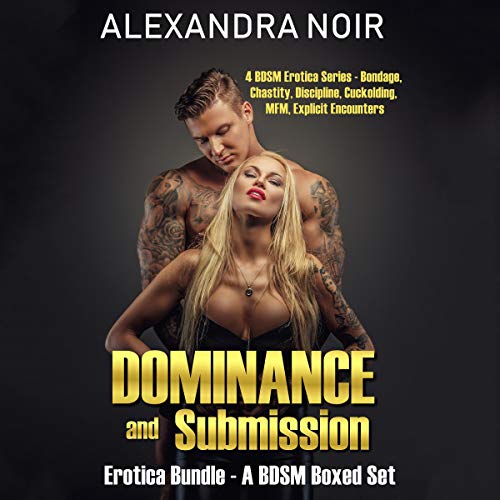 By: Alexandra Noir
Narrated by: Ruby Rivers
Try for $0.00

In Dominance and Submission: A sports car. A dominant man. The lure of forbidden pleasures.

Klara Fintz suspects the purchase of a sports car is Ron's first symptom of insanity. Then when he admits to having fantasies about watching her with another man, she's sure he's lost his mind. Then he meets a Dom extraordinaire who insists on a first-class tour of forbidden pleasures.

In Undercover Domme Lia's star in the department is rising. She's made a name for herself as one of the best up and coming detectives in the precinct. She's had no problem being undercover before, but is shocked when her next assignment requires her to impersonate a profession dominatrix to ferret out a some of the most complex and devious crimes the precinct has ever encountered. Lia is initially repulsed by the thought of sexually dominating men and can not imagine any real man ever desiring such a thing. This begins to change for her as she interacts with Theo Tracy, a white collar businessman who has the keys to unraveling a criminal empire. Her mark quickly becomes her best customer and, much to her chagrin, the only man she can imagine being with.

On her agent's advice she goes into hiding and hires a a private investigator, the enigmatic Zack Anson, to help her find the people responsible. Her time with Zack reveals more than just sexual slander. He understands what is happening in the video because he's a Dom himself who'll stop at nothing to help Gwen find the culprits and find her own hidden, submissive desires.

Zack takes Gwen on a globe-straddling and relationship defining journey to restore her name and free her from her own repression. He knows the key to Gwen's submissive heart is to show her how much she needs him him there to guide and care for her, and he's determined to prove to Gwen that he's the one man worthy of her submission and trust.

the stories are just okay. the writing isn't terrible. but the narrator is just awful. she reads as if the entire story is independent sentences and not as one paragraph. awful.

this one does not hold my interest. definitely needs to be rewritten. sorry if it's offensive.

These stories were pretty average for me. Not a lot of depth to the characters or stories. I was interested in some stories more than others and at times found myself losing interest in parts of all the stories. Some parts seem to drag while other major parts of the stories were glossed over. They seem more about titillating the reader with sex and the story just happened to be a second thought. Yet the sex and play in the stories are not something that stands out. The narration by Ruby Rivers is okay but much of the time she is overly breathy and there is no emotion or much change in her voices.

Are very entertaining. Not her best work but very good. You will enjoy it. Narrator is excellent.

The narration by Ruby Rivers was highly enjoyable. The production value is of the highest quality. I heard no problems during the entire performance. There were not any detectable flaws that I was able to hear during the entire performance. I did not hear any loops, breaks, or buzzing. The production was crisp and clear. Kumquat Publishing delivered excellent audiobook production I was given this free review copy audiobook at my request and have voluntarily left this review.


Did you find this review helpful? If so, would you please take a moment and select the 'helpful' button below? Thanks so much

I enjoyed it! The narration was good and kept me entertained. The author does a good job with the characters. I look forward to reading more books from this author, I was given this free review copy audiobook at my request and have voluntarily left this review.

I had the honour of receiving the opportunity from the author to listen to this book for a honest review. I enjoyed listen to the different stories, but agree that we could do with a male to do the male parts, Ruby Rivers does a good job, but think that it would help her to have the assistance of a male working with her :-) Alexandra has improved her writing with each of her books and I recommend you give them all a go.