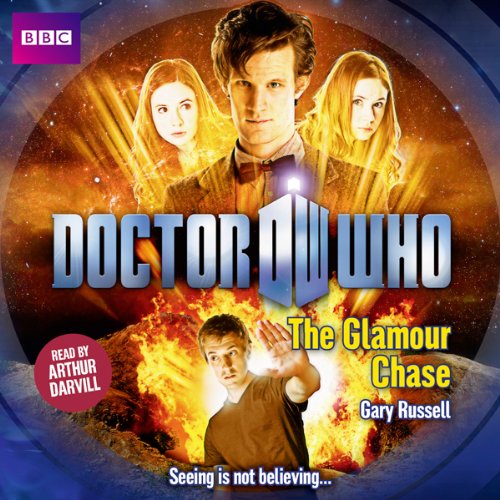 Doctor Who: The Glamour Chase

By: Gary Russell
Narrated by: Arthur Darvill
Try for $0.00

An archaeological dig in 1936 unearths relics of another time... And – as the Doctor, Amy and Rory realise – another place. Another planet. But if Enola Porter, noted adventuress, has really found evidence of an alien civilization, how come she isn’t famous? Added to that, since Amy’s been travelling with him for a while, why does she think the Doctor is from Mars? As the ancient spaceship reactivates, the Doctor discovers that nothing and no-one can be trusted. The things that seem most real could actually be literal fabrications – and very deadly indeed. Who can the Doctor believe when no one is what they seem? And how can he defeat an enemy who can bend matter itself?

What listeners say about Doctor Who: The Glamour Chase

A story with the Doctor, not a Doctor Who story

Would you try another book from Gary Russell and/or Arthur Darvill?

Arthur Darvill is a very good reader. I like his use of different voices for each person in the story.

If you’ve listened to books by Gary Russell before, how does this one compare?

No. While it was good it didn't make 4 stars. Something about it just didn't fit right. The story was okay. The reading was good.

Which character – as performed by Arthur Darvill – was your favorite?

Rory of course. He does pull off Matt Smith's Doctor well. It adds to the store hearing things said the way the Doctor would say it.

Did Doctor Who: The Glamour Chase inspire you to do anything?

While I did like the book overall I wouldn't listen to it again. I plan on returning it.

I have some Doctor Who books in my library but this one might be the best. This one is excellent.

Yes cause doctor who is awesome.

Amy/Amelia Pond she is smart.

What does Arthur Darvill bring to the story that you wouldn’t experience if you just read the book?

Rory point of view and experience with the Doctor you can not miss.

The Doctor's explaining the Glamour.

What disappointed you about Doctor Who: The Glamour Chase?

I have about twenty Doctor Who novels in my library, many of which got poor reviews from other listeners for one reason or another. While they have varied in quality, I have not found them unlistenable. This one, however, is just a mess. The plot wanders around aimlessly. The characters have no direction, and they don't even seem like themselves. I kept thinking I was missing something; I even went back and re-listened to part of it trying to make it make sense. Then I thought that it might make sense if I just kept going. Finally a little over half way through, I realized I was just throwing good time after bad. It is SO bad that I am going to utilize Audible's generous refund policy and get my credit back on this one.

Would you ever listen to anything by Gary Russell again?

How could he take characters that are already fleshed out and somehow make them different and change their interactions with each other? (And I'm not talking about the imposters; I mean the "real" Amy and Rory.) If he wanted more creative freedom, he should just have started from scratch and not bought into a franchise.

Darvill is the actor who played Rory, which was one of the reasons I chose this book. I've listened to the other books he read, and his characterizations are spot on. Even here, he made characters distinct and tried his hardest, but the different characterizations of Amy and Rory and The Doctor apparently made this book harder for him to read. This book is just so bad that he didn't have much to work with. Even he couldn't get a 5 star rating here.

Incredulity that such a poorly written book ever made it past an editor!

Seriously, there are plenty of Doctor Who novels. No matter how desperate you are for a house call, stay away from this one.

Loving this book, a little sad at first but it has some great twists. Maybe not for younger kids though. And Rory is always a pleasant narrator

Rather good overall. Darvill was excellent as usual. The story itself had a minor issue or two but the story was interesting enough to compensate for those issues.

Also, do not be overly influenced by the 1 star review as it is obvious that the reviewer missed the underlying theme of the story entirely.

Bit slow to start with but improved rapidly. Arthur Danvill narratives well and is pleasant to listen to. Story has plenty of twists and turns worth listening to