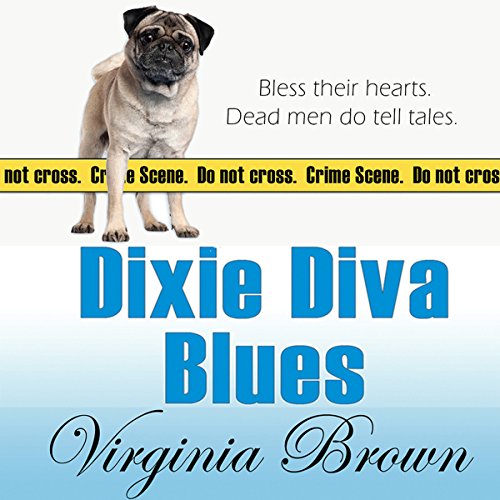 By: Virginia Brown
Narrated by: Karen Commins
Try for $0.00

Trinket and the gang will stop at nothing to clear a diva's husband of murder charges.

"You'd think a midnight prowler would have sense enough to get out after being discovered by a group of middle-aged women armed with flower vases. Or at least stop what he was doing. Not this one. Despite our menacing appearance, he kept opening cabinet doors and drawers.

Our intruder wore what looked like a black Ninja outfit. It did not flatter. He was a bit chunky and not much taller than me. Nor did he move very fast as Gaynelle and I bore down on him like a freight train. Instead of screaming in fear and fleeing out the front door - which stood wide open to help facilitate his escape - he turned away from the cabinet he had opened and threw something heavy. It was a Mason jar, and it hit poor Gaynelle right smack in the middle of the forehead. She dropped to the floor like a sack of flour. I looked down at her, then up at the masked intruder. Eyes glittered at me from the tiny eyeholes, and as he seemed to be unarmed-no more Mason jars at hand - I let out a bellow and charged him."

Virginia Brown is the author of more than 50 novels in romance and mystery. Next up in her best-selling Dixie Divas Mysteries: Divas and Dead Rebels. And coming soon: the Blue Suede Memphis Mysteries and Virginia's mystery/drama saga, Dark River Road.

What did you love best about Dixie Diva Blues?

What was one of the most memorable moments of Dixie Diva Blues?

When the intruder in the black Ninja outfit was first introduced.

She makes the characters come alive.

Anyone who wants to laugh out loud while reading a fantastic book, should purchase this title.

Hope It's Not the Last One

I've really enjoyed this series. I hope there will be more to come, the Divas have more adventures ahead surely.

The narrator takes me back to my childhood in the South
The characters are engaging and feel like old friends
Lighthearted entertainment!!!

This is the third book in this series and I was somewhat disappointed in the similarities in situations in each book. A little more creativity would have gone a long way. That being said I enjoyed the interaction of the characters and will give the next book another try.

If you’ve listened to books by Virginia Brown before, how does this one compare?

Too similar to previous books.

Did Karen Commins do a good job differentiating all the characters? How?

She did an excellent job on most of her characters but on a few others it was extremely annoying.....not all characters need a distinct voice.

This book in the series did not disappoint. I love the divas antics; they are so comedic and humorous. Never would've guessed who the killer was in this one. I was given this free review copy audiobook at my request and have voluntarily left this review.

I do love a mystery that I don't figure out right away. I think I started to suspect the culprit right around the time Trinket did.

This series is about a group of long time friends who usually get involved in solving murders to save one of their friends from being arrested. There are enough clues to lead you along, but it isn't given away early. There are plenty of light-hearted and funny scences too. The books are long though! Worth it, but long!

this story will not disappoint,this is the divas at their best.funny resourceful cunning and as always loveable

What did you love best about Dixie Diva Blues?

I work in the south - so I could "hear" some of my friends saying some of the exact things these ladies were saying and doing. I LOL so many times. :)

What was one of the most memorable moments of Dixie Diva Blues?

I loved the friendship bonding time. Girlfriends are like that and Virginia Brown hit it right on the head.

Did Karen Commins do a good job differentiating all the characters? How?

For the most part yes.

Yes and no. Audible books are my gift to myself for my long drives home. If I listen to them when I'm not driving, I 1- get nothing done at home 2 - have nothing to "read" on my drives 3 - have to buy more books. I finished this one while I was making cards :)

I felt the role of the men in the story to be a little weak - I would be in soooo much trouble if I pulled some of those stunts - I also respect my husbands enough to listen to his requests.

I loved this entire series and I hope there will be more in the series before its done! The author does a great job of keeping you interested in the characters and developing them!