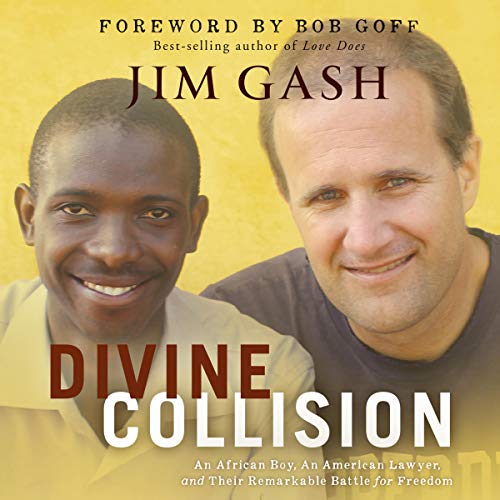 By: Jim Gash
Narrated by: Brandon Batchelar,Jason White
Try for $0.00

Jim Gash's comfortable life as a Los Angeles lawyer and law professor nearly ensured that he and Henry, a Ugandan boy languishing in prison for two murders he didn't commit, would never meet. Henry was losing hope and prayed for a sign from God. Halfway around the world, Jim listened to best-selling author of Love Does Bob Goff encourage lawyers to use their legal training to help imprisoned children in Africa. Jim felt an irresistible urge to respond to this call. Little did Henry know, his prayer had been answered.

Divine Collision tells the firsthand, true story of how Jim and Henry, separated not only by an ocean and thousands of miles, but also by differing cultures and life experiences, inspired justice reform for an entire country. Divine Collision is a fast-paced thriller and will keep you listening, wanting to know what happens next for Henry and Jim.

"The story is as emotional as it is thrilling, and it reads like a major film." (Publishers Weekly)

What listeners say about Divine Collision

emotionally gripping. view into why we are all so lucky that have been wrongly accused.

really enjoyed it. we played it in the van on a long trip. kids really got invested it their lives

This is a highly compelling, inspiring, motivating true story that is great particularly for anyone who's ever dreamed of having of having the courage to step out and do what Jesus is nudging them to do.

this story is inspiring, heart wrenching and personal. challenges you to be more open to what God sees as important in the world.

I loved hearing how God heard prayers on one side of the planet in what seems an impossible, hopeless situation and answers those prayers by touching and moving someone from the other side of the planet. Even when it was just to comfort His faithful hurting.

Heartwarming and inspiring story full of ups and downs, evoking laughs and tears. Highly recommended- I have over 500 books in my Audible library and this is easily top three.

What a great and encouraging surprise to read about a Christ-filled lawyer at one of the country’s premier law schools taking up the cause for Ugandan juveniles held way too long in remand centers waiting for Ugandan “Justice”. Was so moved to learn about how much Pepperdine has been involved in working with what clearly seems to be largely Christian Ugandan senior judiciaries in helping modernize and steamlining the Country’s judicial system. Almost makes me want to apply to Pepperdine and start a second career under Jim’s tutelage. Ha!

God Bless you, Jim, and your wife and family and your Pepperdine family, too! And God Bless your friend Bob Goff, whom the Lord obviously put in your path to progress His plans for you, Henry and Joseph and the people of Uganda!!

Great book based on actual events

Narrator was great! We were captivated throughout the entire book. Well written, informative and inspiring.

Listened to Devine Collision and found it to be a wonderful story. It inspires all of us to walk the walk in our lives.

This book was well written and very inspiring. It made me want to try harder to make a difference for others. Maybe not someone in Africa, but right where I am. I can start in my own home!

It would be almost impossible to put in to words how this book made me feel. It was gripping, I finished it in one day. It honestly changed my entire outlook on life and has made me want to become a better person. I normally don't really read / listen to none fiction but I made an exception for this and I am so glad I did... If I was told I could only take one book with me this would be it.