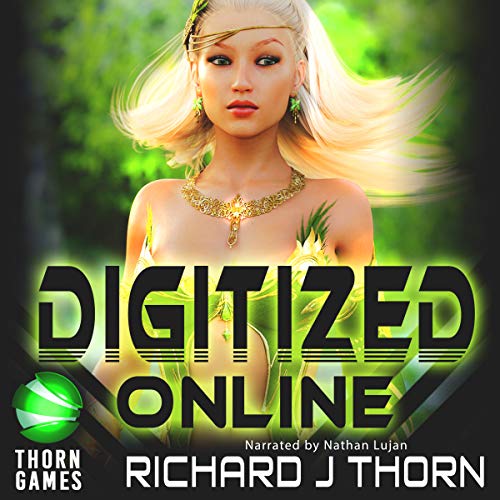 By: Richard J. Thorn
Narrated by: Nathan Lujan
Try for $0.00

He entered the game in a blinding flash of light. He had no memory of who he was, where he came from, or why he was here. Where was here, anyway?

All he knew was that he had entered an online game full of magic and wonder and fantastical beasts.

But something was wrong. The world that he knew was gone. All the people. His family, loved ones, everything had been shattered and stolen from him.

And he was tasked with saving the last remnants of the human race.

But he wasn't alone.

In a race against time, Ivanhoe must overcome his fears and battle his way to victory.

But the AI had other plans. She didn't know that there were any survivors. Not at first. Time is NOT on his side. Will he fight and die alone? Or will he pull other digitized players into the game to aid him on his quest?

In this epic novel, you will find adult themes, violence, language, stats, and more!

the story and narration sucks. never let this guy narrate anything ever again. terrible. wow

narrators are key and this one false flat

Just reading the story, no storytelling

Narrator just... reads the story, doesn't try to take you into the book. I couldn't get passed the first chapter because I simply didn't get hooked.

The audio quality was terrible. The narration was lifeless. The dialogue was awkward and stilted.

I like this book.
A soft litrpg book with sexual adult themes and more.

So far, the raptor in the book has been my favorit character of them all.
Thou I hope to see if the Cowboy becomes a true Cowboy in the book.
And I want to see more of the Amazon.
But I am intrigued to hear of a game that allowes a player to be a Centaur. Makes me want to play one.

Some things in the story dosn't seem to be logical, but is hopefully cleared in the next book series.