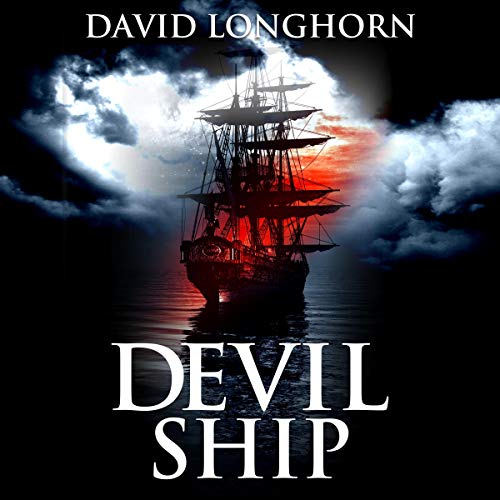 By: David Longhorn,Scare Street
Narrated by: Thom Bowers
Try for $0.00

Evil haunts the high seas....
For as long as she can remember, Sara Hansen dreamed of living in paradise. Sinking her family’s savings into the Pirate Cove resort, Sara and her husband relocate to the beautiful island of Sainte Isabel. But a shadow clouds the island’s pristine shores. And when Sara researches the island’s history, she uncovers tales of an ancient pirate named Lemaitre.

According to local legend, this cruel buccaneer was so evil, even Hell refused to claim his soul. And the island’s residents believe his haunted ship still prowls the waters off Sainte Isabel’s coast. When a shady salvage captain goes missing, Sara is convinced he has run afoul of the demonic pirate.

Ignored by the local police, she investigates the mysterious disappearance on her own. But some secrets were not meant to be disturbed. And Sara soon finds herself entangled in the terrifying curse of Lemaitre and his descendants.

The Devil’s ship sails on the full moon, ready to claim another soul. Will Sara be the next victim to join its cursed crew?"

What listeners say about Devil Ship

I’m starting to like this series it keeps u on edge make you wonder what will happened next I Know their another series coming out soon can wait to read it. And I just finished the last book and I’m currently listening to the previews of it and it sound very interesting.

Loved this book! The cursed pirate theme is great ! Really enjoyed the narration as well . Can't wait for the next book in this series!

Evil haunts the high seas....Sara Hansen has dreamt of living in paradise. So, she and her husband sunk everything they had into Pirate Cove Resort. They relocate there with his best friend and his "model" girlfriend. But there is a cloud on the horizon named Lemaitre. They begin to feel something is wrong when everyone wears a weird necklace of a monkey that looks like it has been hung. They put it down to local superstitions - but soon find out there is more to this than superstitious locals. Sara soon finds herself entangled in the terrifying curse of Lemaitre and his descendants.

Since The Devil’s ship sails on the full moon and takes one victim into its cursed crew - who will be taken at the next full moon? Can they stop it?

From the beginning this book had me sitting on the edge of my seat. O loved everything about it from the ship to everyone in. The narration was great really pulled you into the story. Nothing like having a good person read a great story. Great job David can't wait for more from you.

I was lucky enough to have gotten a free audio book code from scare street. I am volunteering to leave this review. Fantastic audio book plenty of twist and turns that have you creeping till the end.

I enjoyed this book, it was a different kind of ghost story. I'm looking forward to reading the next book in the series.

I was surprized that I loved this book!

I didn’t think I would love this book as much as I did. I’m so glad I read it. I like to be surprised, and this book was a pleasant surprise!

I enjoyed listening to the book with good narration it keeps you on edge and not wanting to visit the island. Really enjoyed the characters of Sara, Joe, Ryan, and Keri not so much of Sainte Isabel's history and how having to wear a monkey charm. Love how fixated Sara was to find out about the island’s curse and trying to solve it. Liked how she met librarian Miss Mountjoy who gave her info on Lemaitre thru Exquemelin’s (ship's surgeon) journal and continued relationship. But will the next full moon be the end of Sara?

This is one of the best books I have ever read by David Longhorn and scare Street he has for a long time been my favorite author of horror tied w/ Ron Ripley of course is my favorite horror author. With his great character building and a plot that can only rival one of his previous books I must say he is all done his self this time. Kelly and her husband hasn’t invested a lot of money and they’re active partner and the man on the thing Randy has gone missing. His girlfriend said he was murdered but the stories she tells is strange and sound unbelievableThis forces Carry and her husband and his best friend Brian and his girlfriend to make an impromptu visit/work/vacation to the unbilled treasure Cove. They have invested all their money and can’t let it go. After showing up they find out there go to guy on the island Laplace what’s the resign and is keeping secrets, she keeps saying strange things that are inexplicable and then the worst of the worst happens and the dark journey begins. This book is so freaking good and although I think all of scare streets books are awesome this one is an award winner I wish I could give it more than five stars it would deserve each store and then some. I cannot wait to read Dark Soul prt2 in the Devil Ship series. As for the narrator what can I say it’s Tom Bowers… Tom freaking Bowers so you know the narration is awesome as well! I highly recommend this book to those who love horror build up into a Christian though and that doesn’t let you down. This is the book for you get it now it is so freaking good… Oh yeah I said that.