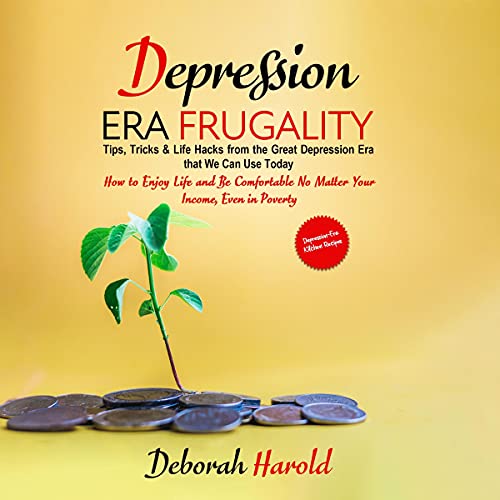 By: Deborah Harold
Narrated by: Trish Elliott
Try for $0.00

We live in uncertain economic times. The United States is facing the most significant unemployment rate since the Great Depression. What can we learn from those who lived through those troubling times? The depression-era frugality tips, tricks, and life-hacks are lessons that we in modern times can utilize.

In my audiobook, Depression Era Frugality, I will show you how our grandparents and great-grandparents made it successfully through the Great Depression. You will learn how to become frugal in every aspect of life so that you can live life to the fullest. The era might have been called the Great Depression, but that does not mean those who lived through it were necessarily depressed. They made the most of every single resource, wasting nothing, and were the ultimate pioneers in waste management before the green movement was cool.

We can learn so much from what those who lived through the Great Depression did. They managed to keep their families fed, clothed, and entertained, all while living on just a penny or two a day. How did they do it? How can we do this same thing today?

Living a frugal lifestyle and learning from our grandparents during the Great Depression is a great idea for those who are living paycheck to paycheck. However, it can also be a great thing for those who simply want to get ahead and be prepared should another depression come. Although many people aren’t ready to make the change to a frugal lifestyle. Hopefully, listening to this guide will help you determine to make changes and start preparing for what is to come.

At the height of the Great Depression, nearly a quarter of the US workforce was unemployed. Even those who were still employed had a reduction in hours and/or a cut in their wages. Even professionals such as doctors and lawyers see drops of up to 40 percent in their income. The majority of the population was facing financial instability, if not complete ruin. As a result, many started living by the motto: “Use it up, wear it out, make do, or do without”. Many families discovered new ways to live a frugal life. They started gardens, patched clothes, and found cheaper forms of entertainment.

If that scenario sounds familiar, we are living through equally uncertain economic times. We can deal with this by doing what our grandparents did to not only survive, but to thrive!

In this audiobook, you will learn:

You will learn all this and so much more in my audiobook.