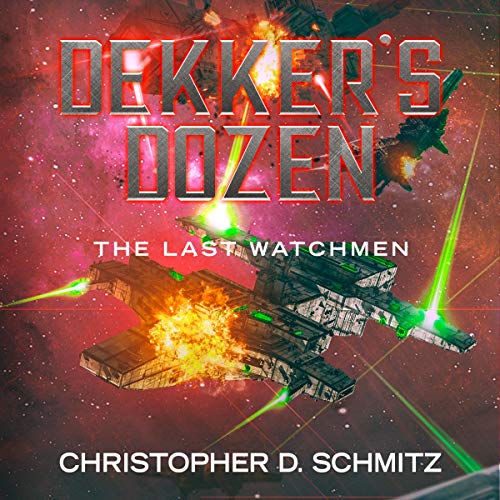 By: Christopher D Schmitz
Narrated by: Richard Coombs
Try for $0.00

Following the Intergalactic Singularity War, Dekker Knight, mercenary and collector of arcane artifacts, works for the highest bidder - but he doesn't take just any job. One in particular, transporting Austicon - the assassin who stalked his family for generations - to a max-lock detention, was supposed to close a dark chapter in Dekker's life.

After Earth's constables botch Austicon's incarceration, Dekker's team is forced to hunt down the galaxies' most heinous criminal all over again when a mysterious man claiming to be an ancient, time-traveling prophet intrudes on them. Ezekiel claims Dekker will soon annihilate of all reality - and he knows all of Dekker's secrets: that he wields an ancient, celestial weapon, was once married to a terrorist, and is the last member of the Watchmen - an ancient secret society with roots tracing back to Solomon.

Following Austicon's theft of a superweapon, Dekker and his team must do the unthinkable to prevent the Earth's annihilation. Worse yet, a demon-possessed tree is attempting to bring "the divine engines of reality" to a grinding halt, destroying all of existence with the death of the planet, annihilating all that is, will be, and ever was!

Steampunk time-travel, cyborg ninjas, deep space unicorn zombies, ghostly rocket-ships, and star destroying Hassidic superweapons converge in one epic story! How long can The Dozen escape death, and how far can Dekker go to in defiance of fate and pursuit of love before his actions break the universe?

What listeners say about Dekker's Dozen

What did I just hear?

Dekker's Dozen: the last watchman, has a lot going on. there's time travel, space ships, unicorn zombies (not the same thing as zombie unicorns), and religious symbology. This is not your average space Opera. to be honest any of these elements would have been enough to carry a book on their own, but together they made a unique plot that was constantly surprising and impossible to predict. But the way it ended I just don't know how this can be the first in a series. it was pretty final.

the narrator Richard Coombs has a real talent with voices. dialogue is where he shines the most. I don't think he used the same voice twice.