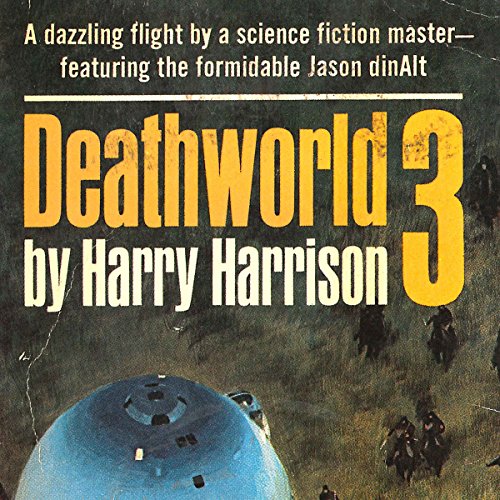 By: Harry Harrison
Narrated by: Christian Rummel
Try for $0.00

The planet was called Felicity. The name was a joke, except for those compelled to settle there. Inhabiting it were beings bred for thousands of years for a single purpose: to attack and kill. Jason knew this. But he also knew the planet on which he lived was moving toward certain disaster. And Felicity was the only spot in the universe where he and his companions could survive. He thought he had worked out the perfect plan. But what awaited him on Felicity went far beyond his wildest imagining.

What listeners say about Deathworld 3

Awesome, Deathworld 1 is amazing 2 is great and 3 was incredible. much to my delight I've discovered there are 7 in total! 4 is a short story and the rest are written in tandem with Russian authors, unfortunately to my knowledge they have not yet been translated. Nothing against Rummel, aside from Metta, he was a great reader however after listening to Greg do the 1st two Deathworlds, I could never fully adapt to Rummel. I'm sad to hear of Greg's passing in 2002. I sure hope someone ends up translating the rest of the books, and gets it up on audible! I would love to hear those stories!

If you love the early 60s/70s era of sci fi worlds then you'll love this. The 3rd book of the series, it isn't really about a death world, but it's none the less engaging.
This is the last book of the series that is in English, the rest are in Russian.
The narrator is also a good fit for the story, his voice evoks the classic audiobooks and cassette taps of the decade this was likely recorded in, which fills me with nostalgia.

This is a great scifi adventure story but I recommend starting with book 1 and 2.

The recording is great and the reader does a great job with the many voices.

I really wish they had the rest of the death world books.

Sure to become cannon for Queer theory

The author constructs an alegorical tale that refutes the phalogocentric cornerstone behind the oppressive white male heteronotmative hegemony.

Not since Judith Butler wrote her seminal post constructionalist work on gender trouble has an author so masterfully laid bare the false underpinning behind white male dominated society. The story is an cleverly constructed alegorical tale that lays bare the terrible sins of western Heternormativity.

A lot of people have however been are so steeped in the racist underpinnings of white male culture that they will only see the story as a rollicking adventure tale. Those people are unfortunately irredeemable who must be removed from society

I am a proud transgendered female lesbian, and I proudly carry this around as my Bible. Anyone who does not appreciate this story on my level is a bigot

All three Deathworld book is well written and feels like it was written recently. Story line is geat with the unexpected twists. Characters are well defined and easily identified with.

thrilling conclusion to the death world series. it is nice to be able to go back and remember the good old days of sci-fi heroes of my youth.

Just a slightly better spin off of book 2.

It was good enought I only thought about abamdomiy the book half a dozen times. Stll a "space novel" that had nothing to do with space. It's more of a time traveler like story of someone with advance knowledge trying to tame the cavemen. The narrator made all of the locals sound like idiots and that really ground my nerves.

this is a great series glad I found it

I really liked Harry Harrison, first time I've read his books I had no idea until the third book this was written in the 60s It's seems so modern in a way..

This was a fitting end to the Deathworld trilogy. It’s not as good as the 2nd book, which is the best of the series, but it’s nice to see that Harry Harrison didn’t rehash anything with these books. What I mean is: each book gives a unique, brutal world that our hero Jason must overcome. You never feel that the worlds are copied one to the next, they’re each kept their own unique concept.

if you've read the first two books and enjoyed them you will have to continue on with this one anyway, so why are you reading reviews? it is as good as pervious offering. Some parts don't hold up well, but then it's been better than 50 years and society has changed a great deal. if you read the originals this is a nice walk down memory lane, and is still a fun and well paced story.

Excellent conclusion to the Deathworld Trilogy

How could Harry Harrison conclude the interstellar tale of the toughest group of humans in the galaxy ?
How could Jason din Alt finally get his girl and save the people of Pyrrhus?
After more than 50 years Deathworld 3 brings a rip-roaring adventure to a satisfying and dramatic close.
I first read this book when it was published but the audio version has given me a whole fresh pleasure. Thank you Audible.