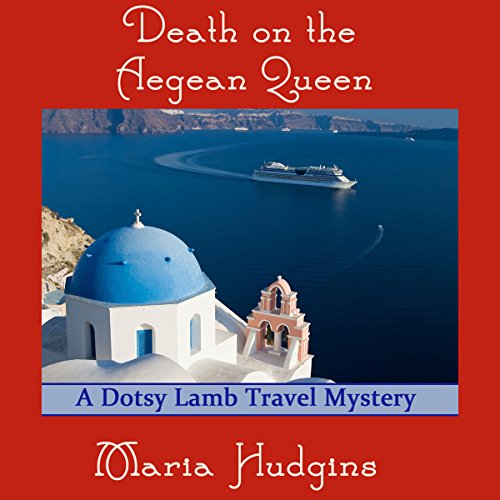 By: Maria Hudgins
Narrated by: Karen Krause
Try for $0.00

George Gaskill, a car salesman from Indiana, goes missing from the stern deck of the Aegean Queen, leaving only a pool of blood and a strange note behind. Ollie Osgood, the husband of Dotsy Lamb's best friend Lettie, is the last person to have seen him and one of three men who lost a bundle to George in a Texas Hold'em poker game. Then the ship's photographer turns up murdered on the beautiful island of Mykonos.

Dotsy wants only to unwind and to renew her promising relationship with Marco Quattrocchi, the Carabinieri captain she met in Italy three years ago, but since Ollie is the prime suspect in George's disappearance and Marco is embroiled in the photographer's murder, she can't.

The Aegean Queen is a ship with a theme - archaeology. Dotsy strikes up a friendship with the ship's guest lecturer, famous archaeologist, Dr. Luc Girard, and introduces him to the ship's klutziest dancer, Sophie Antonakos. With the help of Lettie Osgood's amazing powers of observation, Dotsy, Sophie, and Luc discover antiquities in the ship's display cases that have been looted from museums or smuggled from their homelands.

The trails of murder and theft converge on the island of Crete, where Dotsy finds herself dodging bullets from the gun of a man she doesn't even know.

What listeners say about Death on the Aegean Queen

Not a pleasure cruise

The third Dotsy Lamb Travel Mystery takes place on a cruise among the Greek islands. Dotsy and Lettie are back to solve another crime. This installment is better than the first. The characters are pleasant and the story is believable. Another good buy and good read.

One for Miss Marple fans!

Would you consider the audio edition of Death on the Aegean Queen to be better than the print version?

I have not read the print version, but I think the narrator did a very good job, little touches of accent really worked well and characters were easily identifiable.

Would you recommend Death on the Aegean Queen to your friends? Why or why not?

Yes, for those who enjoy Agatha Raisin or Agatha Christie this is a perfect choice.

As mentioned above, the style and accents were great.

No, I don't think it's that type of story though to be honest. It's quite easy listening.

This is my second Dotsy Lamb listen and I'm already a huge fan! Maria Hudgins has given us some fabulous characters to connect with. Somehow, she's managed to allow them to be over 50 and perfectly contemporary. Neither too "hip" nor too "dowdy." Just right.

Her plot, too, is terrific. A lot of twists and turns with a bit of learning (in this case, about Greek artifacts) built in. I truly didn't figure out who "did it" until our heroine did. Again, just right.

Thank you, Maria Hudgins! And may we have some more, please?

Great mystery and I did not expect the ending.

The interplay between characters and how believeable they are. You can really imagine the places!

This is a first listen for this narrator and she did a fantastc job with it. Go ahead and buy it. You wont regret it!