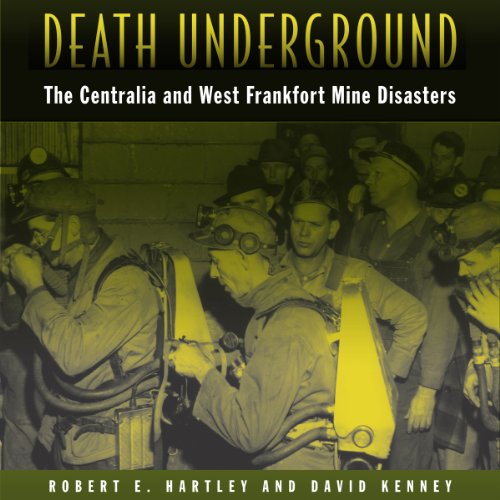 Death Underground: The Centralia and West Frankfort Mine Disasters examines two of the most devastating coal mine disasters in United States history since 1928.

In two southern Illinois towns only forty miles apart, explosions killed 111 men at the Centralia No. 5 mine in 1947 and 119 men at the New Orient No. 2 mine in West Frankfort in 1951. Robert E. Hartley and David Kenney explain the causes of the accidents, identify who was to blame, and detail the emotional impact the disasters had on the survivors, their families, and their communities.

Politics at the highest level of Illinois government played a critical role in the conditions that led to the accidents. Hartley and Kenney address how safety was compromised when inspection reports were widely ignored by state mining officials and mine company supervisors. Highlighted is the role of Driscoll Scanlan, a state inspector at Centralia, who warned of an impending disaster but whose political enemies shifted the blame to him, ruining his career.

Hartley and Kenney also detail the New Orient No. 2 mine explosion, the attempts at rescue, and the resulting political spin circulated by labor, management, and the state bureaucracy. They outline the investigation, the subsequent hearings, and the efforts in Congress to legislate greater mine safety.

Hartley and Kenney include interviews with the survivors, a summary of the investigative records, and an analysis of the causes of both mine accidents. They place responsibility for the disasters on individual mine owners, labor unions, and state officials, providing new interpretations not previously presented in the literature. Augmented by twenty-nine illustrations, the volume also covers the history, culture, and ethnic pluralism of coal mining in Illinois and the United States.

“Their [Bob Hartley and David Kenney] account is an important contribution to the historical literature of downstate Illinois.” (Taylor Pensoneau, former president of the Illinois Coal Association and author of Governor Richard Ogilvie: In the Interest of the State)

What listeners say about Death Underground

Give the reader a Mucinex

I would love to finish the book, but the reader sounds like he has a head cold. I have never not finished a book, but there is a first for everything, which is sad because Centralia is my hometown. I can't finish this book.