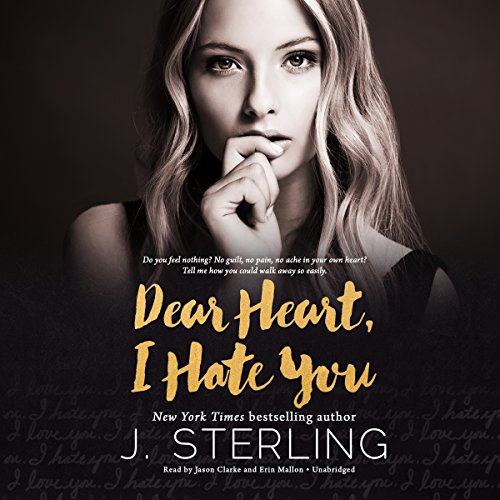 Dear Heart, I Hate You

By: J. Sterling
Narrated by: Jason Clarke,Erin Mallon
Try for $0.00

I didn't plan on anything that had to do with Cal Donovan from Boston.

Meeting him was a complete and utter surprise, taking me completely off guard. I met new people every single day in my line of work, and none of them affected me. Isn't that just the way of things? You could meet a thousand people, and they'd all mean nothing to you, but then you'd meet that one and they suddenly meant everything.

I was a self-professed workaholic. When did making yourself your number-one priority become such a horrible thing? I wasn't entirely sure, but I learned fairly quickly after my last breakup that men don't like being second on a woman's priority list. And they seemed to be intimidated by a motivated female, calling me things like hard to handle, challenging, and difficult.

Being single seemed to work best for me, and I didn't plan on changing my relationship status anytime soon.

But then I met Cal.

And he f***ing ruined everything.

What listeners say about Dear Heart, I Hate You

Couldn't wait to hear the next chapter!

I listened during my 70 minute commute to & from work and when I would arrive and had to shut it off, I already couldn't wait to hear what would happen next. I struggled to keep myself from listening to it on my break, that is how much I loved it! I just wish there was more!!!!!

I was kind of skeptical about this book because another book by the author that people loved I kind of hated. I didn't even finish that series, but I this for a deal so it was a win win. I really liked this book. It was a bit of insta-love but they didn't immediately jump and bed so it was cool. And I can understand meeting someone and just really vibing with them from the start so it really wasn't love but more like insta-like. Plus they had a long distance relationship and got to really know each other from that so I had no issue with it. I like how both characters were not ready for love but it came to them when they least expected. The long distance thing worked for them since they both put work first and didn't really have time for a relationship. That's pretty much what brought them together. I also like how it was the mystery of will they or wont they since they lived on opposite sides of the country and neither were willing to move but they had such a strong pull to each other.

One thing I didn't like was after a certain thing happened the heroine had too much inner dialogue. She just kept rethinking the same thing over and over again for like 2-3 whole chapters. That got annoying especially in listening to the audio. I think the resolution to the conflict was kind of sudden but there was drastic measure taken to make amends so I was ok with the resolution. 3 stars for the story.

I really loved listening to the audio book of this story. Not saying that it would have been worse reading it but the audio book kept me really engaged and it usually takes me a while to listen to audio books but I listened to this straight through pretty much. I love Erin Mallon as a narrator and this was my first book with Jason Clarke but he did a really good job. 5 stars for narration.

What a roller coaster ride! “Dear Heart, I Hate You” by J. Sterling, starts out as a feel good book. You will love it as you listen to Jules and Cal meet and fall in love. I’m sure we’ve all been there. New love is so exciting and you can’t seem to get enough of the other person. Not even having a whole continent between them seems to be an obstacle. I found myself smiling so much that my cheeks began to hurt.

Then it all falls apart. Cal“ghosts” her. He basically gets cold feet and just cuts Jules out of his life. Without so much as a word, Jules is left clueless wondering what ever happened and questioning her very ability to read people. My heart was breaking for her! I found myself wanting to find Cal and throat-punch him! When an author can elicit this kind of reaction from a reader, I think they have done their job well! I think I connected so well with this story because my husband and I went through a very similar journey, except our time apart was more like two years. I made him work to win me back!

My only criticism of the story is that I would have wanted to hear more from Cal’s POV to hear what he was going through.

It goes without saying that the narrators, Erin Mallon and Jason Clarke did a wonderful job! They are both amazing at bringing the characters to life. Well done!

Is this audiobook worth a credit? 👍🏻Absolutely!

Get Real - It's average and 3 stars at best

I am really surprised by all the rave reviews for this book. While it’s far from one of the worst romance novels I’ve read, there is no way it’s a 5 star read.

There are some good things about it - I think the writing is pretty smooth, and I think the delivery is pretty solid. But, while I appreciate a comment made by another reviewer that it is nice to read a ‘good old fashioned’ romance novel that isn’t trying to incorporate every sexual move and every romance novel component (though there are a few cliches thrown in,) a book does still have to have a little something going on to interest the reader. This book had so little plot that until chapter 19/20 there was nothing happening - no tension, no drama, no nothing but endless ‘this happened, then we ate this, then I wore this, then I met this person and talked to her, then I told him what I talked to her about, then we ate something else’....it was all bland, ‘day-in-the-life-of’ comprised of boring conversations between characters and long, repetitive internal ones:

Yawn. Yes, there was supposed to be a bit of tension - the long-distance relationship kind, and the professional drive vs. personal life kind, but it was just a little ripple in the pond which didn’t make itself felt. Then, because the author finally felt something needed to happen in the book, she forced it to become an issue by tossing a random cannonball into the water. After that, the book just sank like a cannonball, and the characters sank right along with it. They became childish and annoying and it all felt like a high school drama. No amount of rationalizing their behaviors or thought processes was going to bring them back to life. They were DOA, and even the super rushed HEA couldn’t resuscitate the book.

The story is narrated by both Jason Clarke and Erin Mallon, though Erin seems to narrate a larger chunk of the book. I think they both do a pretty solid job, though, it’s true, as another reviewer noted, that Erin does this little intake of breath after each sentence that sounds like her characters are making these little gasps a la Hillary Duff - that, plus she does this little quavery thing. Her narration makes her female characters sound timorous and worse - either like wide-eyed simpletons or impossibly fake ingenues. She does, however, speak clearly, uses good pacing and intonation and she does great male voices. It comes down to personal preference, but I do find that I am frequently distracted from the story because I find myself critiquing her delivery, so while she’s pretty good, she’s not my cup of tea. Jason Clarke was though.

SPOILER ALERT and a bit of a rant: I thought the way the author forced the drama in chapter 19/20 was pretty lame. It was great that something finally HAPPENED in the story, but Cal’s reaction to Jules’ taking a couple days off and passing on a full commission for a house was so overblown and unrealistic. And, the way he handled it via total radio silence was supremely juvenile. He couldn’t explain things to Jules because she would be ‘ruled by her emotions’ and would ‘fight him on his decision’? What? Likewise, Jules’ rapid fire transition from mature professional to pathetic hanger-on is hard to swallow - texting him again and again, mentally going on and on and on about her pained heart, it was tiresome to listen to for FOUR chapters. Then, the author wanted us to forgive Cal because he actually did it all to help Jules?

“When Jules had told me that day about handing off her client to her coworker, my chest had ached for her. The last thing I’d wanted was for her to sacrifice anything work-related because of me.......I figured she’d eventually hate me for it...”

Give me a break. You can’t go back now, J. Sterling - no amount of sweet talking is going to bring that character back from eye-rolling, you don’t make any sense but you keep on trying to sell it, pansy-assville. You wrote him into a corner, and you can’t write him out of it. Make your characters believable, consistent and rational. Sure people make mistakes, and sure they can be forgiven, but that kind of total wimpdom? No. Oh, and create real drama by building it rather than springing it. And Jules, really? When Cal put himself into your phone as ‘Dream Lips’ you shoulda known right then and there that he was not the one for you....it wasn’t funny, it wasn’t cute, it certainly wasn’t sexy, it was just gag-worthy. You got that, Babe?

Loved the story! Couldn't stop listening! J sterling is defiantly one of my new fave authors. Best part of all, Jason Clarke's narration is so damn sexy! I could listen to him talk all damn day. *swoon*

This story crept into my heart. It shows the fears people have about relationships and makes you feel the question and the answers in your heart. The book drags you in!

My first book by this author. I listened to the audiobook and the narrators did an awesome job. Really enjoyed Jules and Cal’s story. They had instant chemistry!! Loved the slow burn! And then throw in a little angst!! 4.5 stars for me! I will definitely read more by this author!

It had a nice story line, however didn't keep my interest. kind of cheesy. Was hoping for more at the end. Didn't care for the reader at all. she kept sucking in her breath at every sentence. couldn't wait for it to be over.

This was a cute story. The storyline was not as strong as it could’ve been.

The story was great. The characters were awesome. one issue I did have was with the Erin Mallon, her voice has a tendency to be whiney or insecure sounding and it was off putting at times. Jason Clarke however, has a gorgeous and sexy voice. Overall I was very happy with this book.