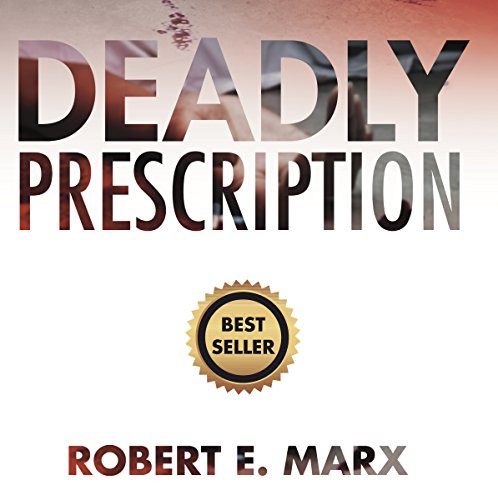 This is a David meets Goliath story between victimized unwary patients and Big Pharma's legal thugs. They will stop at nothing to hide the damaging side effects of two mainstream drugs.

Creativity and real-world medical experience has allowed Dr. Marx to craft an amazing story so realistic, you'll wonder where the line of imagination crosses over to realism.

How far will some men go for money and power? Deadly Prescription shows what happens when profit becomes more important than life. The twists and turns will catch you off guard, and the realistic details will keep you on the edge of your seat.

Self-learning and life lessons can come from this doctor fiction too. Though it's not a doctor memoir or medical memoir, some medical fiction books reflect on real-world issues of controversy. Dr. Marx's medical mystery shines an eerie light on a big problem we face today, perhaps much more sinister than we might imagine, if only to ponder as possible or probable.

This fictional story tells of tainted drug studies and side-effect coverups by two pharmaceutical giants. As innocent people have been severely injured by their drugs, one of which is still on the market, the protagonist confronts these giants by defending his patients as a forensic expert in current lawsuits against these companies.

Their ruthless team of lawyers will stop at nothing to quiet any noisemaker. The goal is to keep their client's damaging drug available for as long as possible.

It isn't until the Russian Mob gets involved that things get very messy.

Listen to Deadly Prescription and see how men of greed actually think and act - and even worse, what lengths they will go to. After all, what's a few thousand lives destroyed when billions of dollars are being made as a result?