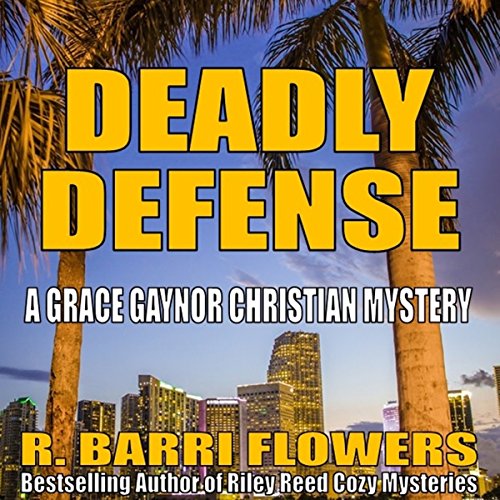 Three years ago, Miami defense attorney Grace Gaynor was the victim of a violent sexual assault in which she killed her attacker. She has been undergoing therapy to deal with the trauma.

When her therapist Doctor Austin Winchester, whom she had begun to develop feelings for, is arrested and charged with the violent murder of her friend Kara Pedrosa, Grace reluctantly takes on his case for her law firm of Kendall, Francois, and Larosa.

She goes up against brilliant Miami-Dade prosecutor Perry MacAlister, a former colleague whom she still considers a friend. He's as tough as they come and believes he has a slam dunk case against the successful psychiatrist, Dr. Winchester.

In order to prove otherwise, Grace must call upon all of her considerable skills, faith, and gut instincts to win an acquittal in the face of uncertainties and mixed loyalties.

The intriguing and complex storyline, three-dimensional characters, and shocking conclusion will keep listeners engrossed from beginning to end.

What listeners say about Deadly Defense

What a great mystery thriller that keeps you guessing and on your toes, as I read I knew the author was trying to push me in one direction but I also knew it was a setup but it sure looked like he did it. I had other people in my sights but one by one they were cleared. When the end came I was totally shock to the outcome. The author gives a very entertaining plot that keeps you guessing until the end with a few shocking moments.

Grace has had a hard time dealing with nightmares and life since her attack where she killed her attacker. As she relived this trying time I was pulled in and almost felt like I was right there with her. The author writes of a brutal attack giving you enough information to know how brutal it was but in a way that it isn’t over bearing. A lot of detail isn’t given letting the reader use their mind so they can deal with attack in their own way. When her boss talks her into coming to a therapist to help with her issues and nightmares giving her his doctors name. From the first the visit helps her on the second he helps her more, making her make a list of her day and nights to help find the trigger that brings them on. The author gives a compelling story that really has the listener hooked. Once the doctor said to go on her own and see how things goes. When her best friend is murdered and everyone pointing fingers at the good doctor Grace doesn’t know what to think, she knows he couldn’t have done it not the man she knew.

At first the narration was a little slow but after the first few sentence she really gets into the emotion of the characters giving a good performance. Her tones are a little dry but I would expect that from someone who has went through all that Grace has. It is hard to show true emotion after going so far inside yourself to survive. Unlike another reviewer I didn’t have any trouble knowing who was talking. I thought her character voices were good and fit the part of each character. The narrator made me feel each emotion. My heart just about broke when seeing all that Grace had to deal with as she found out her friend was dead and how she died. There are no background noises, no volume changes just a very clean and clear audio that I thought the narrator delivery was great. I thought her character voices were really good, she shows true emotion even dry when needs to be to make it a more believable story.

The author really pulls on the readers heartstrings as the doctor is taken in and Grace is called to be his lawyer. Her best friend or her friend how does she pick, she wants her best friends murder to find justice but what if he is her doctor friend how will she deal with all the fall out not only to her but her employer? She truly believes the doctor is innocent but as time goes by she has to question herself. She turns it all over to God’s hands asking for the strength to go on giving the doctor the best defense she can. Even with things pointing to the doctor there are things pointing away from him. She takes this and runs with it.

The author gives a compelling story that had me hooked almost from the first page. The story was very believable. I didn’t know what to think, at times I thought the doctor may be guilty and if so how would Grace take that if he got off and she found out later he did it. The story really takes off with a lot of turns as you go one way the author takes you another. You can tell a lot of thought went into writing this to really mess with the readers mind having them doubt everything they had just read. I found the book to be very entertaining and enjoyable with all the twists and turns. The ending was very much a surprise I was even shocked and can’t say why. I think most will really enjoy this story and love how it is laid out.

Deadly Defense is my first read in the Christian mystery genre. I purchased this book because the author offered a free copy in exchange for a review but I decided to purchase my own audiobook and give this review free of any obligation. I found Deadly Defense to be a quick read over the 2017 Thanksgiving/Christmas holiday season. The book introduces a new series by the author featuring criminal defense attorney Grace Gaynor. Gaynor must defend a psychiatrist accused of murdering her best friend. The story moves along at a good pace. The mystery is not so much about who is the murderer but why. There are references to faith in general and having faith in her client but Gaynor does some tracking down of witnesses and builds her case. The Narrator Jane Boyer does a decent job with the different voices; she is not a distraction. Overall a nice light mystery with no graphic violence detailed or sexual content. I will read the next book in this series to see where Flowers takes Grace Gaynor.

In the main book the protagonist lost her Best Friend to a brutal murder....... still no emotion. I’m not sure if the book was written that way or the narrator is just bland!!!!!!

Omg she has guts

The main character in this story has guts. The dr looked guilty from the get go. But nothing prepared me for the outcome. In a nutshell this is more about trust than anything thing else. And I personally would never trust anyone to the extent she did. Loved the thrill and excitement of this story I received this free for an honest review from the author or narrator

I enjoyed this book. The author did a good job of keeping the mystery alive. I was surprised, not so much of who 'done it', but the why. The narrator did a fine job with the performance of the story.

I really liked this Mystery, a great story with a nice twist towards the end. The religious aspect was sometimes emphasized a bit too much for my personal taste. However, that can be expected in a Christian mystery. I sometimes found it difficult to know who is speaking at a certain point in the story - particularly during conversations bewegen male characters. The narrator has two ways of speaking - one for male and one for female characters. Especially the male characters sounded almost identical to me, so it was like ,ah Ok, that is somebody else speaking now'. I also liked the, bonus' of an additional story about a murder case re-enacted by a theatre-group. Nice extra. All in all, an entertaining audiobook I can recommend. This book was given to me for free at my request and I provided this voluntary review.

I eeceived this book from the author of my own free will for an honest review. And it surprised me a lot, I mean it was a full length novel and 2 shorts and I enjoyed all 3 of them so much. I admire how he was able of fusion christianity in all of these people lifes, usually lawyers are known from being the devil's advocates and all but Grace was great as she was so faithfull to herself and to a divine power. One of the things I enjoyed more were the twists that kept you guessing what was really going on. The narrator was pretty good too, she had a good pace when she talked and the message came across pretty well and she conveys feelings well when she reads. The other two stories were surprisingly good for being so short too I really liked that, hopefully we will see more of this author in the future.