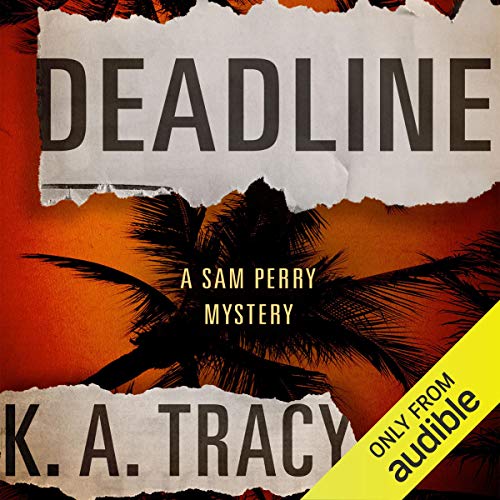 When a young drifter is found murdered in the desert outside of Palm Springs, the police start their investigation - but it's crime reporter Sam Perry who gets to the bottom of the story. Working her way backward to piece together the victim's mysterious life, Sam gets drawn into the seedier side of the glamorous resort town, a world of strip clubs, blackmail, and betrayal. All suspicions point toward former A-list actress and now mayoral candidate Ellen Konrad, a woman that Sam can't quite figure out but is deeply intrigued by. As their mutual attraction grows, the clues begin to add up, and the list of people with secrets and a motive to kill multiplies. When she finally untangles the shocking story behind the drifter's death, the revelations put Sam and those closest to her in grave danger.

K. A. Tracy has penned a superb series debut, introducing a hard-nosed crime reporter that is perfect for fans of Michael Connelly and Liza Marklund.

What listeners say about Deadline

One of my FAVORITE audio books!

Would you consider the audio edition of Deadline to be better than the print version?

I never read the print version so I can't really say but I loved the audio book.

Sam Perry, I found her to be the right amount of capable, talented and intelligent. She was a fantastic protagonist!

Have you listened to any of Julia Farhat’s other performances before? How does this one compare?

No I haven't but I may give them a shot.

Sam Perry will beat the Deadline to catch a killer.

This was a great mystery mixed with a great lesbian love story. However, the mystery aspect was stronger than the love story which I didn't mind, because you can find many a good lesbian love story but not very many that incompasses both (mystery and love story) as well as this author does.

I listened to the first 75% and read the rest of it. I would recommend reading the book instead of listening to the audio. There was a lot of characters and information with the investigation and it was really hard to get that with the narration. The narrator isn’t terrible but there isn’t distinction between voices and it makes it hard to follow along with the story. Im undecided if I’ll read more of this series. I may try reading the next one before making a final decision.

this is a who-done-it with a few twists and a little (read a very limited)lesbian storyline. Some of the mystery is predictable, but much is not revealed until the end. overall, it is entertaining.

A pretty good mystery with multiple inter tangled relationships and at least two, perhaps three story climaxes. The literary narrative is done by reporter Samantha Perry who after witnessing the aftermath of an entire family killed and tortured has semi-retired to the desert to do bingo fixing features for a small local weekly. Then Sam is sent to do an initial report on a dead body located in the desert and the scent of a major crime has her investigating instincts alive again.
While doing her sleuthing reporter thing she meets a gorgeous Hollywood A Lister who is currently running for mayor of Palm Springs. Sam, having pushed down her lesbian desires after a bad experience as a teenager is energized by the intelligent, talented, beautiful actress. As usual in books, television shows and movies, human nature and realism are stretched past the breaking point in pursuit of drama a time or two. In spite of those limitations this one rates as a solid 4 star read/listen.

This is a well written and very complex mystery with lots of twists and turns. However, I felt that there was too much going on within the dynamics of the story. I enjoyed this book but I'm not sure I'll get the next one.

Loved it!
Definitely a must listen. Great story. I was entertained from start to finish.

On the edge of my seat!!

It took me a couple of tries to listen to this book, but once I got about a third of the way in, maybe less than that, I wanted no interruptions and was happy when plans got cancelled so I could finish this book. There were many connections, twist I didn't see coming when I thought I had it figured out, and a bit of the dang I feel bad for that situations type of moments..

I don't know is KA Tracy is a new author but I will be adding KA to my must read list if all books are written this well! Kept me guessing the entire time...A narrator can make or break an audible book and I think she did a good job as well..

Interesting story with a few twists and turns. I enjoyed the characters and their depth.

Really very, very good. But my brain is bleeding.

Holy wow, that's about as complicated as solving a Rubik's cube on acid. Still, quite brilliant.

A great book, rich in detail, intriguing and a thoroughly enjoyable in its entirety. Full of interesting characters and well timed humour is appreciated.
Not a wasted word, which is rare, I admit to skimming books that don't deliver.
Not usually interested in murder mysteries as a genre, but this was offered under romance so I took a chance, so glad I did. Highly recommendable.
If a follow up book is written I hope the central characters remain, it's been great getting to know them.