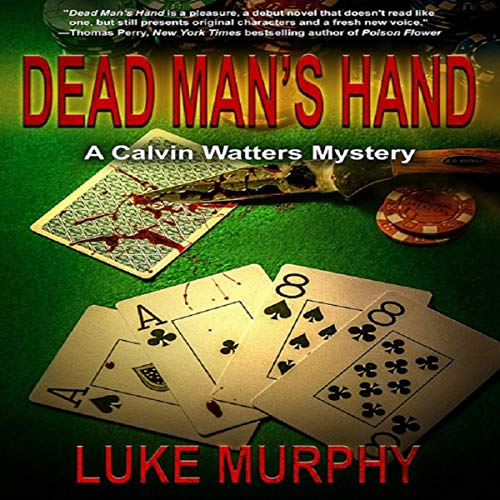 By: Luke Murphy
Narrated by: Conner Goff
Try for $0.00

What happens when the deck is stacked against you....

From NFL rising-star prospect to wanted fugitive, Calvin Watters is a sadistic African-American Las Vegas debt collector framed by a murderer who, like the Vegas police, finds him to be the perfect fall guy.

...and the cards don't fall your way?

When the brutal slaying of a prominent casino owner is followed by the murder of a well-known bookie, Detective Dale Dayton is thrown into the middle of a highly political case and leads the largest homicide investigation in Vegas in the last 12 years.

What if you're dealt a Dead Man's Hand?

Against his superiors and better judgement, Dayton is willing to give Calvin one last chance. To redeem himself, Calvin must prove his innocence by finding the real killer, while avoiding the LVMPD, as well as protect the woman he loves from a professional assassin hired to silence them.

"You may want to give it the whole night, just to see how it turns out." (William Martin, New York Times best-selling author of The Lincoln Letter)

"Murphy writes in a clean, mean style, as compelling as a switchblade to your throat…the real deal." (Rick Mofina, award-winning author of They Disappeared)

Hang on for the twist

I found this author on Twitter and thought I would give it a try. The story starts out very predictable and seems like you get the answers before the questions. Hang on, it gets stronger and the ending brings a twist I didn't see coming. So much so, I will be getting the 2nd book in the series to finish to see what happens next.

Dead Man's Hand was a good start to a new mystery series. I found it a very enjoyable listen and it kept me thoroughly entertained. The characters were interesting and they fit very well in the Las Vegas setting which offers a lot of opportunities for further stories. The main character Calvin Watters is likeable and has a pretty interesting back story and progression through the book and has been set up as an interesting PI in future installments.

The pacing of the book is very good and it goes by very quickly(in a good way). I like how the book was told through the perspective of different characters at times and it was all done very well. The narration by Conner Goff was great and really fit the characters well and made the story a pleasure to listen to.

The book isn't groundbreaking but it is a very solid start to a mystery series and I would definitely recommend and am looking forward to future installments of the Calvin Watters Mystery's.

This is a great debut novel introducing some very compelling characters and a promising new series. The story is seriously suspenseful and complete. No cliffhanger, although it's set up for another book in the series.

Conner Goff is an excellent choice to narrate this audiobook, and hopefully the series. I caught a couple of "retakes" that should have been edited out, but both the production and performance are quite satisfactory.

This audiobook was a solid listening experience. Dead Man's Hand was well narrated by Conner Goff. His straight forward narration was a great fit for the book's many point of view changes and many many characters within the novel. He did well to separate the characters enough for the listeners to tell when there is an exchange going on. His inflections came out great most of the time.

As for the novel. The majority of it was well fleshed out for making the scenes feel realistic and posing an objective for the story. I really enjoyed it. The few gripes I had with the story was that it felt a bit too drawn out to pad for time at times, when I'm just itching to skip forward to push the story. But that's me and my adhd talking.

I was given this audiobook for free in exchange for my own honest review. I have left this review voluntarily.

I would highly recommend this audiobook to anyone looking for a good listen! Great job, Conner & Luke!

Casino takeover combined with adultry equals money and murder. A really great start to a series.

When bodies start piling up, Calvin is suspected and must prove his innocence before more people are killed, including the woman he loves.

This story kept me on my toes. With various twists, intriguing themes and characters, and plenty of action and suspense, i was entertained throughout. Set in Las Vegas, the story involves casinos, gambling, corruption and politics intertwined into a great and believable story.

Conner narrated well and had good intonation. His performance was clear and enjoyable.

Excellent story by this new-to-me author! Calvin. Watters is known as a ‘knee-breaker’ working for a well known Las Vegas bookie. Calvin is tired of his meaningless ‘job’ and wants out. Except the bookie isn’t ready to let Calvin go...and helps to set him up for the murder of a prominent casino owner. Now Calvin is the suspect in, not just the casino owner’s death, but also that of the bookie. Since the real killer has friends in high places, will Calvin get justice? Detective Dale Dayton doesn’t believe that the case is as cut and dry and he’s being forced to accept. Can good detective work take down the real killer?
Excellent story with a surprising twist at the end. Looking forward to the next book.
I accepted a complimentary copy of this book in exchange for an honest review.

I'm not good at writing reviews. But I wanted to say this is a fast-paced thriller that captured my attention from the first page. I listened as often as I could and never lost interest. Likeable and believable characters, stellar narration. This is worth the listen/read.

I'm from Las Vegas, and Luke Murphy did a wonderful job representing the city. I'm looking forward to book two.

Not a fan, I won't bother with the rest of series.

Characterisations are paper thin, dialogue particularly clunky, story isn't engaging either unfortunately. The amount of repetition of the characters name is almost comical.

Narration is very flat, one note too.

If rest of series was free I still wouldn't bother.

I really enjoyed the second book, so much so that I had to listen to the first book as well. Glad I did I really enjoyed this book and it explained so much about the second book that I might have to re listen to it to appreciate more. Even though I knew what the out come was and who the mastermind was it was still very enjoyable, mainly because so much was going on. Despite the main charter being a leg breaker there is no graphic descriptions of violence, just a few deaths. The story is told by a number of the characters, to give there perspective of the situation, which works well for the story and helps you follow along nicely, especially as there is a lot of characters. The cast of characters was interesting and the author didn't spend hours describing there home life or history but just enough to make them human and interesting. I hope there is a book three in the works because I will be keeping an eye out for it.
When a big casino boss is murdered it looks like an open and shut case, Calvin Watters a leg break for a loan shark is the obvious suspect but for two Las Vegas detectives it is to obvious. As the pair goes against orders and investigate the prime suspect go on the run leaving them with more questions than answers. Is Calvin being set up? Is there a hitman in town and who has the money or neve to hire one? and who had the real motive to kill the boss? As bodies start dropping before they can get the answers it is a race against time to bring it all to a happy conclusion.
I liked the narrator and thought he did a good job with the voices. I like it when an author sticks with the same narrator as it lend a sense of continuity to a story.
I was given this free review copy audiobook at my request and have voluntarily left this review.

I want to be superman again.

An injury to the knee destroyed Calvin's hope of a superstar sports celebrity. Tatooed, big and black, he now worked as a Collector, recovering money from those who didn't want to pay their debts. But Calvin wanted out, had been saving up: just one more job ...
Dale was a Los Vegas cop and Jimmy his partner. When the owner of a prominent casino is found murdered, and police receive a call implicating Calvin, Dale's suspicions that this is a set up grow as the body count rises. But with his chief suspects deemed untouchable, this is going to be a hard case to break.Sent

This is a murder mystery full of intrigue and twists, the characters as important to the story as the plot itself. And they are not straight black and white, but definitely flawed. Well written, almost plausible, this is a great read from page one. And the narration by Connor Goff is also well performed, making the reading experience even more satisfying.

My thanks to the rights holder of Dead Man's Hand, who, at my request via Audiobook Boom, freely gifted me with a complimentary copy. I look forward to the future volumes in this Calvin Waters Mystery series. Recommended.