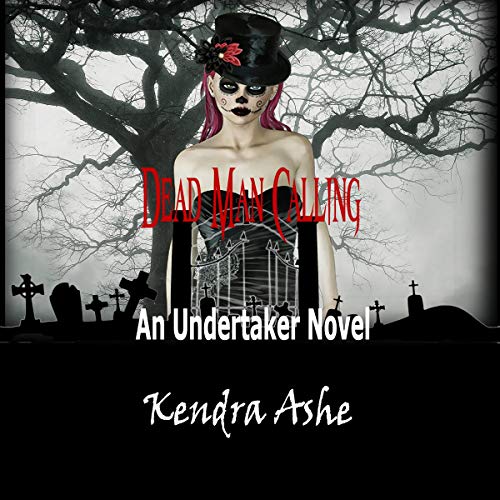 By: Kendra Ashe
Narrated by: Susan Eichhorn Young
Try for $0.00

Jazz Sweeney has just inherited a mortuary, which would be so bad, except she has also inherited the ghosts that go with it.

Life suddenly changes for Jazz when she receives an inheritance from her long lost grandfather. She bids farewell to her job at Happy Days Burgers and sets out to convert Blackwell Rest into a nightclub.

But she has a few surprises coming her way.

It would seem that her estranged grandfather's accidental death, might not have been an accident. If this isn't bad enough, old man Blackwell's pet monkey now needs a home, and the ghosts that come along with her inheritance, need a new psychic detective to help them with all their unfinished business, which usually involves murder.

And then things get worse!

A murder victim is discovered in the cemetery, and he just happens to be a member of the biker club known as the Death Dogs. To complicate matters, Jazz may have been a witness to the murder, kind of.

Brock Logan, the leader of the Death Dogs, has taken an interest in her, which opens up a whole new can of worms. He's one hot bad boy, and exactly the kind of guy she doesn't need in her life.

Caught in the middle of a biker war and a murder investigation, Jazz begins to think that working at Happy Days Burgers might not have been such a bad deal.

Nothing is as it seems!

Light, fun read. Enjoyable story. Especially loved the heroine! She is brash, and a bit crazy ...accepts everything with a laissez faire attitude. Looking forward to reading the. next one.

First I thought it should be longer. I liked the story but it was missing info and details, such as fight scenes. I also didn't care for the reader. She sounded flat. I will keep an eye on this writer though.

I just couldn't seem to get as involved in this one as I had expected to. It didn't seem terribly coherent, and ambled along without really getting anywhere. But I got it on the cheap as Whispersync, so it's all good.

The story is really unique but execution was terrible. The narrator's voice was monotone through out the complete story. I was only half listening. For much of the short story people are getting acquainted or I though they were.

***spoiler***
At some point Jazz is recounting her experiences and I discovered she was kidnapped twice. I could not tell from the narrator's tone.
There is an interesting werewolf angle which is unique but is underdeveloped and it is directly tired into the reaper angle.

I don't know what others have read because the other reviews were really good. That is why I tried this out.

Beware. If your credits are dear to you pass on this one.

This is a fun easy listen that sucked me right in! Can't wait for the next two in the series to come out on audible!

Loved the story! Can't wait for book 2. Hopefully it will come out soon.

I’m sorry but this audiobook was just awful- unoriginal, and with very monotone narration. I won’t be looking for other books by this author.