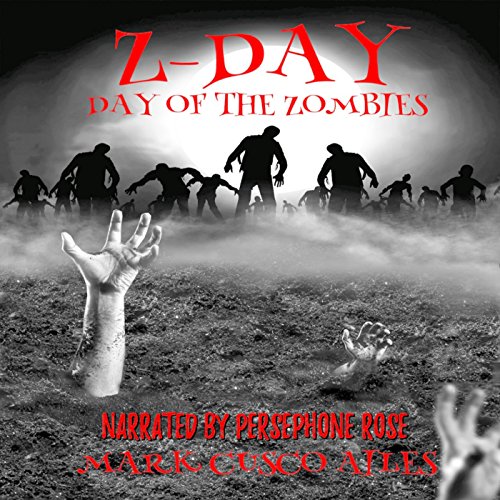 Day of the Zombies

By: Mark Cusco Ailes
Narrated by: Persephone Rose
Try for $0.00

The zombies have escaped Zombie Park!

The plague has brought the dead to life and their hunger for the living is insatiable. The Zombie Park has been overrun and the dead have been unleashed upon the city causing horrific deaths in their path. The spread of the plague seems to be unstoppable this time as it ravages the population. There is no warning of the breach and the public is left to fend for themselves grabbing any weapon they have on hand to fight the undead.

How was the park overrun? Who let the zombies out of their enclosures? Will the military drop a nuclear bomb on Valparaiso, Indiana, in order to keep the zombie plague from spreading any further and is there any way to survive once you're trapped in the middle of the starving corpses? Can they be stopped?

What listeners say about Day of the Zombies

I enjoyed this book so much. I liked the first one in the series ever so slightly more because of the anticipation of how badly this bad idea was going to go. In this book, part 2, the zombies have been created, perfected and let loose. This part is more about escaping the flesh eaters, survival and the reaction of the US military. This tale includes subterfuge, coverups, murder, former human flesh eating machines, some brief sparks of romance and much more. I would recommend this book to anyone who enjoys an undead story with a dose of humor!

I loved this first book in this series. Zombie Park is worth the read. this is book two and is not a stand alone book. ( and thats ok, because book 1 rocked)
Though I didn't think it was great as the first one, it was still good and worth the read if you like zombie books!
I really like Mr Rose's main voice, and would listen to him again anytime!

The zombies are loose!

The Zombie Park idea didn’t turn out so well. The zombies, undead humans and undead animals alike are on the run, leaving a trail of death and destruction everywhere they go. The PETZ organization (People for the Ethical Treatment of Zombies), have done their work well by unleashing havoc on the city of Valparaiso. How this is going to turn out is anyone’s guess. Will the authorities or the Army be able to stop the spread of infection as the zombies continue to feed and kill? Will the Army’s real plans for the park come to light? Stay tuned to find out. This audiobook was given by the author, narrator, or publisher at no cost in exchange for an unbiased review via Audiobook Boom.

Would you listen to Day of the Zombies again? Why?

If you liked zombie park then you will love. Day of the zombies can it get better then zombie park of course this is another wild ride by Mr mark ailes

Have you listened to any of Persephone Rose’s other performances before? How does this one compare?

The zombies have escaped the park and doing what zombies do, eating humans and converting them to zombies all the gory stuff but missed the smart talking/communicating zombies in this book. The characters are likable some funny some evil. Ben is dead and there are new characters, General Poe is still in it. You must read or listen to the 1st of the series. Narration was good especially the voices of the different characters. Recommend this book for zombie lovers. Can’t wait for Plague of the Living Dead on audio. I was given this free review copy audiobook and have voluntarily left this review. Thank you!!

Zombies on the Loose!

This book is a continuation of the first book in the trilogy. After the opening of Zombie Park, what could possibly go wrong? According to this book, a whole lot! Someone has let the zombies loose and the fun begins. Not only are there human zombies on the loose, all of the animals that have been turned into zombies are also running free, killing everything in sight.

The book contains plenty of zombie encounters, with plenty of gore, blood, killings and more. But, after a while, it starts to read like a movie script. Every chapter is full of zombies killing people and people killing zombies. Otherwise, there isn't much of a story. Just when you start to figure out who the characters are and how they relate, they die in a horrible way. By the end of the book, there are only a handful of the original characters left. Also, I really didn't like any of the characters, maybe because they were killed off so fast. I usually need at least one character that I can like in order to truly enjoy a book.

The book is pretty stereotypical in that all government and all military are bad, everybody else is good. This part of the book was a little over the top for me. And, there are still a few mad scientist types in this book as well. All in all, the only unique thing in this book was the zombie animals. I would have preferred more about these animals and less of the evil military.

The narrator does a pretty good job, but some of the voices were pretty irritating. His women's voices are grating and the US Army General with the British accent was confusing. I actually sped up the book a lot in order to finish it. I got all three books in this trilogy at the same time, so I will complete the series. Otherwise, I wouldn't bother. In a genre overrun with choices, this would not be one that I would recommend unless you love campy B-movies.

I was given the opportunity to listen to the Audible version of this book by the author/narrator/publisher and chose to review it.

Wow, if you are looking for a zombie book that is packed with tins of action amd very descriptive zombie eating... then you have come to the right place! This book is packed full of action and descriptive eating... just when you think someone is gonna be ok... nope they get eaten! The narrator takes this to another level. My guess is this narrator loves zombies as much as I do because he is really getting into it. The characters have life you hear that life. Then they die by being eaten and dang if you can't picture it and hear it because it's that intense. You will not be sorry if you get this book. Especially if you love zombies that actually eat!

So many phrases were repeated over and over and over that I felt like the author was just trying to fill the pages. If I heard the words ‘the area’ or ‘the building’ once I heard them 100 times. (And that was all in about 10 mins)
As with any zombie book you must suspend reality. In this series you must also accept that every character is deplorable and a complete idiot. I honestly do not care about a single one of them after 2 books.
Oh and all scientists are apparently insanely mad & all generals or lieutenant are as well. They are all sick with power, greed and lust for their names to remembered in the history books. Even the president is just another idiot. (This fictional one and our actual one)
I can’t imagine how Persephone Rose got through these when narrating them. I’ve come to enjoy his performances but even he could not help this.
Seriously I love Z-nation & any & all bad horror but not this. This isn’t even so bad it’s good. It just isn’t. If any of the characters had a single moral fiber or brain cell between them then maybe......I’m sorry. I know this is the worst review I’ve ever left but I am being honest.
I was voluntarily provided this review copy at no charge by the author, publisher and or narrator.

I have really loved some of the zombie stories I have listened to, but unfortunately not this one. The premise was too silly for me and the story had no depth. Much of the plot was predictable and I found the stereotypes adolescent.

I was given this audio book for free in exchange for this unbiased review.

Ok story but a masterful performance

Persephone Rose takes what would be an average Zombie action story and elevates it with their narration. If you like zombies and need a reminder in why you subscribe to audible instead of just reading then check this one out. The narration alone makes it worth it.