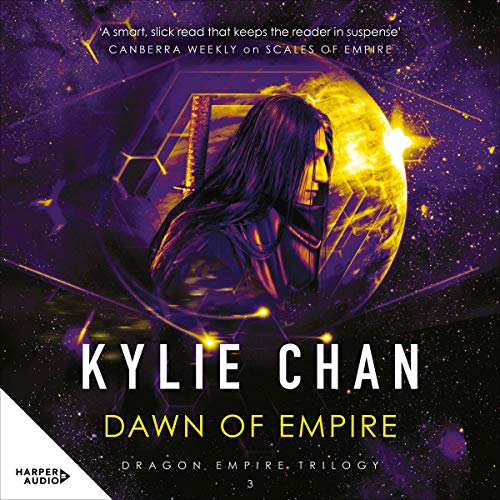 By: Kylie Chan
Narrated by: Jennifer Vuletic
Try for $0.00

The compulsive conclusion to the Dragon Empire trilogy from sci-fi superstar Kylie Chan.

Life seems settled for Jian in the Dragon Empire. She's comfortable in her position as Captain of the Imperial Guard and content with her unusual domestic arrangements.

But when trouble stirs at the edge of the Empire, they discover that the Cat Republic has been hiding a powerful and dangerous force that could destroy everything the Empire represents. Jian and her family must work together to save the Empire - and travel further than any dragon has ever gone.

PRAISE FOR THE DRAGON EMPIRE SERIES

"A smart, slick read that keeps the reader in suspense." (Canberra Weekly)

"I had so much fun reading this - adorable characters, seductive dragons, narcissist cats, crazy imagination and lots of wisdom." (Lian Hearn)

What listeners say about Dawn of Empire