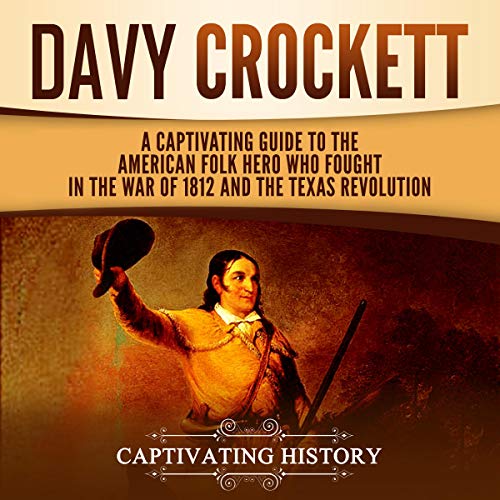 Davy Crockett: A Captivating Guide to the American Folk Hero Who Fought in the War of 1812 and the Texas Revolution

If you want to discover the captivating history of Davy Crockett, then pay attention...

If, as historian Thomas Carlyle said, the history of the world is but the biography of great men, then it is also true that the story of the great men is a parable of their times, places, and generational aspirations. The life of Davy Crockett, one of the most cherished and remembered American frontiersmen, is an accurate representation of the United States as it stretched westward to become one of the largest nations in the world.

Yet, David Crockett was not a mythical character but a very real person. Such was his mark in the process of westward expansion that, among hundreds of other frontiersmen, only he got the informal title of “King of the Wild Frontier” for posterity.

What is undeniable is that Davy Crockett was always faithful to his convictions, as he was guided by a deep commitment to justice, and above all, he was someone who always did what he thought was right, even running to aid his strongest political enemy, President Andrew Jackson, when someone tried to assassinate him. And that philosophy of life - doing the right thing no matter what - is much more than can be said of many others of his generation.

Davy Crockett: A Captivating Guide to the American Folk Hero Who Fought in the War of 1812 and the Texas Revolution chapters include:

So if you want to learn more about Davy Crockett, scroll up and click the "Buy Now" button!

What listeners say about Davy Crockett: A Captivating Guide to the American Folk Hero Who Fought in the War of 1812 and the Texas Revolution

I was apprehensive about the length of this when I downloaded it. Turns out to have been about perfect. It tells the story of a near mythical figure from America's history by breaking through the myths and proving what facts do exist. Good job in all aspects.

I think it's pretty good!

I am a close dropping of Davy Crockett. I needed to purchase this book to teach my daughter about her great-great...grandpa. I liked the guide and the approach the writer explained his life story.

While I have taken it with kindergarten and first grade, this book would also work wonderfully with older students and provide possibilities to compare and contrast, explain fantasy, the hero myth, and American History.

Surely! The Lion of the West

David Crockett was a charming man as well and gained his reputation as Davy Crockett. I travel an hour both ways to go to and from work therefore I listen to audiobooks was one of that absolute best!

Educational and fun to picture in your mind the results of the day without any modern insight. An agile and easy guide.

Was very excited guide about Crockett's life in his own words. Would have favored the physical size of the audiobook be a bit smaller- being so large stopped me from taking it anywhere with me to know, but the top and paper quality are excellent.

Marvelous to see how he grew up and where and what things were normal life that today people would imagine they'd die from. I live in north Alabama and it was very exciting that he suggested places by name around here and south Tennessee that are the same today!

A Captivating Guide to the American Folk Hero

Davy Crockett is an interesting controversial historic person from the past. He seems to have contrasts and contradictions. He took part in wars against the Native Americans, but yet he vehemently opposed taking their land as a Congressman. Some people feel that he is a hero, but some people in other ethnic communities don't view him as a hero. This book shows some of the contrasts and contradictions of Davy Crockett.

Davy Crockett, like the United States, encumbered the journey of growth, revolution, and bipartisanship. As Crockett and the USA stretched westward to become one of the largest nations in the world, Davy Crockett’s path was well on its way.

this book is best

This book gives you the unvarnished story of the complex life and character of Davy Crockett. Most people know only what they have listen of the mythical character. It's rather unfortunate that the myths so often survive over the years only to elevate the person to the status of a god. It is through books like this that we discover that the person was a very real human being living in and coping with real-life challenges in a very different world than today. In this way, we realize that the person was indeed remarkable and far from ordinary, but not super-human.

This book about Davy Crockett was very well researched and was written in a way you enjoyed the story of his life! All of us have heard of this famous man but I think there are a lot of little things and maybe big you didn't know about him and this book covers it!

If you are a fan of history and biographies, then I highly recommend you get Davy Crockett as soon as you can, you won’t regret it. Recommended for all ages.

There should be another option for the star because I really love and enjoy this book. This book helps me a lot. I definitely recommended this to all.

Davy Crockett by Captivating History, we learn about one of the greatest folk heroes in North American history, Davy Crockett. An avid hunter and explorer turned politician. We enter his childhood, his family life, the beginning and end of a promising political career, his last stand during the Battle of the Alamo, and so much more!

I really like this book and learn a lot from this book. I definitely recommend this book for its background of the man and some of the little known aspects of his life.

This is a well-reproduced book about the exploits, both true and exaggerated, of an American legend. The author relays all the well-known stories of Crockett but also does not shy away from his faults such as being a pretty bad family man, drunkard, and even slave owner.

This book was fairly easy

This book was fairly easy and very comprehensive. Most of all, the book was very interesting to understand and covered his childhood upbringing right through his passing at the Alamo.