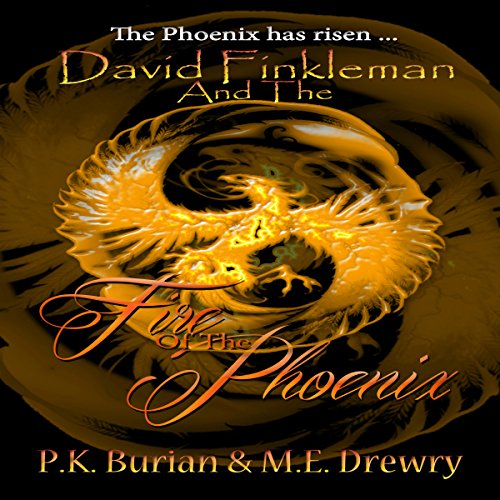 David Finkleman and the Fire of the Phoenix

David Finkleman and the Fire of the Phoenix

David Finkleman and Sabrina Stevens must find the phoenix before an evil wizard, Monti Jones, gets his greedy hands on it. But Monti has plans of his own to get rid of them. He uses magical pills; when mixed with water, they create monsters that want to kill David and Sabrina!

Plus, David's brother, Henry, is under a love spell, placed on him by the lead cheerleader, Mandy Peyton, and her warlock father, Paul. Despite David's pleas, Mandy makes it clear she has no intention of giving Henry up without a fight.

With David's FBI agent and magical grandfather still recovering from his heart attack, David and Sabrina are on their own. Their relationship is strained because David took Kayla Peyton to the homecoming dance instead of Sabrina, and this case keeps David returning to the Peyton's house and to Kayla for help!

Henry has so much at stake: his high grade-point average, starting quarterback position on the football team, his ranking in the nation as a quarterback, the football scouts looking at him from Division I universities, and all the years of studies and training, preparing for this moment. Can David save his brother from becoming Mandy's love zombie before he loses everything?

The Phoenix has risen, but can David's magic and Sabrina's ability to talk to animals save this supernatural bird before it becomes a myth once again?

Would you consider the audio edition of David Finkleman and the Fire of the Phoenix to be better than the print version?

David- he's young and he also realizes he has lot to learn. He's spunky. He seems to know what he wants in life and is working toward that goal (work for the FBI full time). He's seeing that on the surface it's an easy job, but there's a lot more to learn and David is rising to that challenge.

Al Kessel is amazing. He makes the story so entertaining. The characters are coming to life with his narration.

This will be a book that I listen to over and over again. While there is definitely conflict, the characters (general) positive attitude makes me be on their side and want the best outcome for the character.

I enjoyed the first book. This one doesn’t disappoint! I recommend listening to the first book before this one. I can’t wait till the third one!

A Sequel even better than the original

This is the second installment in the David Finkleman series- and I thought it was even better than the first. It follows teenage wizard David as he works with the FBI to stop an evil plot to steal and sell a magical Phoenix. At the same time David is working to free his brother from an love spell cast on him by his girlfriend's warlock father. I found this story to be very engaging- with a strong plot and lots of action. I particularly liked the scenes where David used his magic to fight off enemy wizards up to no good. This is a very clean book and I think it would be appropriate for middle schoolers up through adults. It would be helpful to read the first book in the series before starting this one.