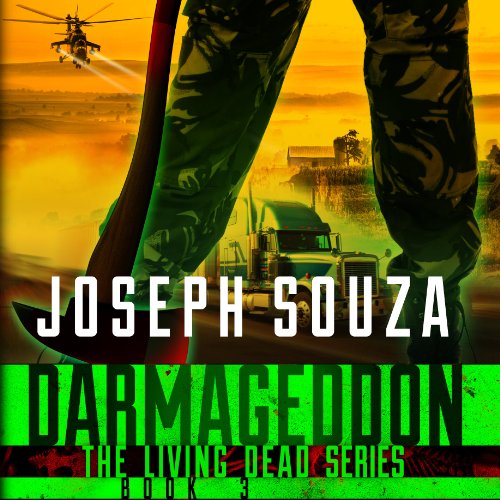 By: Joseph Souza
Narrated by: Dan Lawson
Try for $0.00

Taking off where Darpocalypse left off, Dar and her weary band of survivors flee Boston in two 18-wheelers in order to meet up with her family in Washington State. Pursued by an army general hell-bent on capturing Dar’s most precious cargo, the group embarks on a cross-country journey through the zombie-infested heart of America.

What listeners say about Darmageddon

Author and Narrator on the Rise!

If you could sum up Darmageddon in three words, what would they be?

The story is left unfinished. Quite a few questions need to be answered! I'm guessing "Dardemption" is next.

Any scene with the character named Brownie was great.

Not too extreme. This book has quite a bit more humor than the previous two. Which works well.

Now before you listen to this audiobook and start ripping me for the high rating I gave it, know this: This isn't a book by Arthur C Clarke. This book is like a triple "A" affiliate in baseball. As such, you don't go to a minor league game with the same expectations as you do for a major league game. You judge the individual game on it's own merits. Having said that: Souza has grown immensely since the release of his first book. His writing has improved in all areas as he discovers his "voice." Make no mistake, he does have a ways to go. Hiring a competent editor is a must for his next book. I have a bit of OCD, and when I read a book that's part of a series, I must read the entire series! It's a problem, I know (I even slogged through all of the "Wheel of Time" books even though there was nothing new after book four). Souza is going to be a very good fiction writer in the near future, and Darmageddon is another step in the right direction. As for the narrator, Dan Lawson: This guy is amazing! His characterizations are some of the best I've ever heard in audiobooks. Some of the characters (Brownie, General Townsend, Cephus, and Jamal to name a few) are so diverse that I was sure that there was more than one narrator being used. Some of Lawson's earlier audiobook narrations aren't very good; even bordering on terrible. But like Souza, he has gotten better and better by leaps and bounds. This narration is one of his best, and one of the best books I've listened to in the last year (performance-wise). I found myself listening to several chapters multiple times! He has narrated quite a few books that are not available on Audible, but can be found on other sites such as iTunes and Simply Audiobooks. If you're a fan of discovering artists before they blow-up, then listen to Darmageddon. Souza and Lawson are on the rise. And one day you can say, "I knew them when.."