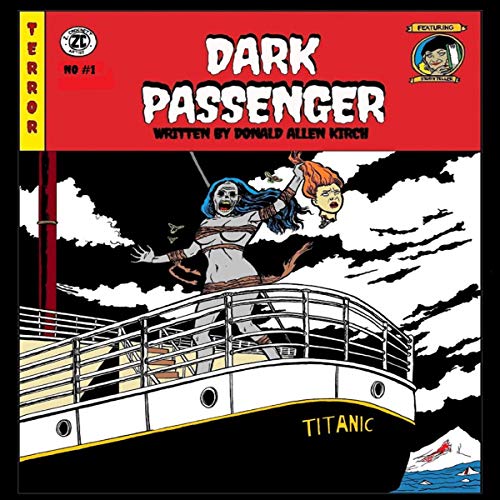 By: Donald Allen Kirch
Narrated by: Hollie Jackson
Try for $0.00

Onboard the RMS Titanic, Professor Dennis Parker believes he's taking with him to New York the archeological discovery of a lifetime. As the voyage progresses, passengers and crew become the victims of several grisly murders - not seen since the infamous Jack the Ripper. All clues point to the impossible: the murderer is a 3,000-year-old mummy named "Ka-Re." Amid all the death and chaos, Parker forces himself to choose between preserving his lifelong discovery and saving himself.

What listeners say about Dark Passenger

God Himself could not sink this ship

This is the story of the sinking of the Titanic, it also tells a paranormal story of a mummy on board. We all know what happened to the Titanic, and surely the same fate happens; however, this provides a slightly different twist to the story. This gives a great reinterpretation of the sinking of the Titanic and there are definitely no “On Top of the World” moments.
The setting of the Titanic is a great place to tell a paranormal story. Having a well-known setting, regardless of how tragic it is, allows you to focus on what is different. I fully enjoyed everything about the mummy, although I would have preferred to hear more. This was a great story and I loved the mixture, just wanted a slightly different ratio.
I really like the focus on the characters and you really get close to them. I really got attached to two, well three if you count the mummy, and was biting my nails waiting to hear their fate. For what this may have lacked in some plot, this definitely made up for in character development and was an overall great story.
I have to say that I was really impressed with Hollie Jackson. First time I have listened to her and was quite happy. I really enjoyed just listening to her voice, yet alone her telling me a really neat story. She read this clearly, confidently, and with great character voices that captured me. I hope to come across more of her in the future.
I was voluntarily provided this free review copy audiobook by the author, narrator, or publisher.

The first thing I ever read by Donald Allen Kirch was his book, Drop Dead Gorgeous which is a bizaar tale of misogany and misanthropy, scientific torture, and dating. What grabbed me was the cover of his book, which is done in the same style as th cover to DDG. I love the artwork, and that generally pulls me in before I ever read a book blurb. This one looked to be just as crazy as DDG, so I knew there was no way I could pass this up.

The premise is pretty simple, you have the Titanic, and a killer mummy aboard. Sounds insane, but there has long been rumors and beliefs that a mummy had been smuggled onto the doomed vessel, and might even have been the very thing that cursed the vessel in the first place. Kirch took that historical nugget, factual or not, and turned it into a first rate tale. One of th brilliant ways that Kirch works is that although this is a tale about a killer mummy it does not overly focus on that fact. Yes there are murders most grisly, and a cranky bit of carrion cajoling about, but he manages to make it character oriented as the players live out their final days on the ship that might take their lives (after all there is a mad mummy killing people).

Kirch's writing style flows, and it keeps your attention. The story is gripping and fun, in a midnight movie kind of way. The only issue I had was the narration by Hollie Jackson, and my complaints are minor. She did relatively fine work telling the tale itself, and kept things interesting, but when it came to the voices she did for various characters the various accents she did were wonky. I won't say watered down, because Titanic, but they were not a good fit from her mouth to my ears. They were wonky, and seemed unpracticed or unfamiliar to her, but it was only enough that it was just a minor distraction. She kept my attention, the whole time and I enjoyed listening to her. Just a wee flaw in a great big diamond.

I won't tell you how the story ends, but you already know the ship sinks. How the mummy is dealt with I will leave up to you to discover. The book is a blast of fun and is a perfect evening listen, it's just under 8 hours, split it up over two nights with a gass of wine, and remember that no one will be complaining about the board having enough room, or that someone should never let go. Even though I did receive a promo code for this review it in no way influenced my considerations of the material, and in fact, inspired me to be more honest. Getting a code generally makes me harsher as a reviewer as I am more often concerned what someone like Me will decide based on my review.

Now That Was Cool!

Very unique and interesting and dark (not that the sinking itself isn't dark enough lol) twist on The Titanic tale.

On board along with all of the doomed passengers en route to New York was a killer mummy. Yes, I kid you not!
And it was awesome!
Just let go and have fun with it, and you'll laugh, cry or scream - or maybe all 3. Horror yumminess!

A fun listen, loved the story and loved the narration, great job. The title reminds me of Dexter! :)

I LOVED this book!I didn't want to put it down!A mummy on the Titanic!Was that the reason she sank?The characters were all very interesting.Hollie Jackson is an wonderful narrator.I was given this book by the narrator,author or publisher free for an honest review.

Never mind the cover, it's a great story

The cover nearly put me off from the audiobook, but thank god I went through with it in the end. It's absolutely amazing and has little of everything. I have particularly love everything that has the Titanic and the paranormal ever since playing 9 hours, 9 persons, 9 doors. There's all the historic facts, not that I verified them but still, about the Titanic, many different points of view (including the mummy's, Ka-Re), some good-old detective work (though sadly not concluded), and tons of action and horror. It was extremely entertaining and gripping, I found myself listening through the night because I couldn't put it down.
I was given this free review copy audiobook at my request and have voluntarily left this review.

A fun horror spin on the Titanic

This was a quirky and entertaining horror spin on the Titanic story. It is oddly engaging and pretty entertaining. The narration is well done. All in all, it was a fun listen.

This book contained a novel new take which fictionalised the events leading up to the sinking of the Titanic, which involves an ancient 3.000 year old Mummy! The story was a little twisted in places, and somewhat of a mystery, but the story very well written and constructed by Donald Kirsch and I found it enjoyable and entertaining.

The narrator Hollie Jackson did a fine job with the voices, and she wasn't too distracting or intrusive to the story.

*I was given this free review copy audiobook at my request and have voluntarily left this honest review.

Dark Passenger. If you like a conspiracy, a horror, and the old Hammer house of horror movies. Then you'll love this..
Well crafted and written it's got everything you need in an audiobook.
Narration is superb, suspends reality and carries you onto the Titanic.
A great read/listen.
I was given a free copy of this audiobook at my own request, and voluntarily leave this review.

HMS Titanic with a twist!

Here we have the historic Titanic cruise with a twist. On this particular maiden voyage the HMS Titanic has an unwanted stowaway. A 3,000 year old mummy has booked passage with its archeologist Dennis Parker. Due to an age old curse the mummy comes alive and decided to sacrifice passenger and crew to her god in the hopes of removing said curse. As with the real Titanic bottom line comes first and the Captain is persuaded to continue the voyage. Stay tuned for a cat and mouse hunt for a mummy. How many will survive? How will Parker deal with his resurrected find? This audiobook was given by the author, narrator, or publisher at no cost in exchange for an unbiased review via Audiobook Boom.

A much better titanic than DiCaprio’s

The titanic is famous and infamous. It is well documented and yet contains and is surrounded by many mysteries. This fictionalized version of the what happened to the titanic is like taking Brendon Frazier’s the Mummy and mixing it up with titanic and letting Mel brooks direct it. The whole thing is a dark and twisted version of what happened and the reason for the titanic sinking has never been portrayed like this before. I was voluntarily provided this free review copy audiobook by the author, narrator or publisher