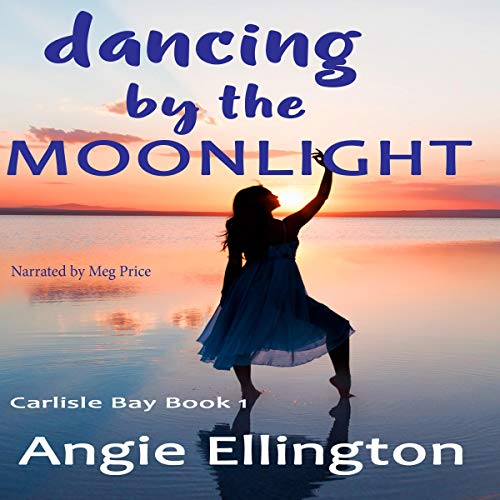 Dancing by the Moonlight

By: Angie Ellington
Narrated by: Meg Price
Try for $0.00

Olivia Shields is a new resident to Carlisle Bay, Connecticut, after having traveled the world as a professional ballet dancer. Dancing was her life. Chasing performance dreams is all she's ever known or planned for. Now, she is starting anew. She didn't expect to be a boutique manager at 31, but it's better than spinning out into the abyss of the unknown. Being in Carlisle has brought solace to her listless soul.

Brady Carlisle has recently returned to Carlisle Bay, his hometown. He has spent the last decade in California, designing and patenting surfboards, playing guitar, and singing for anyone who cared to listen. Becoming his own man, without relying on the Carlisle name and money is all he's ever wanted. He now owns a bait and tackle store by day and spends his evenings playing guitar on his deck or sailing along the bay or over the crystal blue waters of the Atlantic.

They discovered love for the first time 13 years earlier when Olivia spent the summer before college living with her aunt in Carlisle Bay. Will the pain of the past keep them apart, or will moonlit summer evenings lead them back to each others' hearts?

What listeners say about Dancing by the Moonlight

I just love Angie Ellington. She is one of my favorite authors. Every book of hers is a feel-good romance that makes me feel like I’m reading a Hallmark movie, or in this case, listening to one! I especially love audiobooks and getting to listen to this one in audio version was perfect to refresh my memory of this fantastic story before I read its sequel, that’s about to come out! Brady Carlisle and Olivia Shields have such a sweet story and supporting characters are lovely. Ellington shines best when combining all the details of characters with the appealing setting and happily ever after story. To top off this heartwarming story, Meg Price’s narration ties it up warmly. She’s a perfect voice for this Carlisle Bay introduction!

Sweet Clean summer romance! Characters were realistic and relatable. I think I fell in love with Brady! Grab a glass of wine sit by the fire and completely lose yourself in a small town in Connecticut.
Meg Price did an amazing job. I can’t imagine anyone else as Olivia and she even managed to sound sexy as hell as Brady

Really liked this writers approach and dialogue. It is a good story line and will be looking forward to the next book. The narrator did a wonderful job. I liked her performance and would listen to any book she narrates.

This book was given to me for free at my request for a voluntary review.

This audio was so good!! I was able to visualize the characters and the plot so well! The story was very sweet and realistic!

I loved the characters! I loved the story! I found myself completely transformed and living this story with them. Narration was perfect!

Dancing by the Moonlight is a well written second chance romance. The characters are interesting and fun and the storyline kept me engaged and wanting to hear more. The narrator gave a delightful performance for this first in series. Looking forward to the next book.

Small Town Romance at its best

This is much more than a love story between Olivia and Brady and how they find love again after 13 years apart. It tells the story of all those close to Oliva and Brady. It is a season of growth and relationships for many in Carlisle Bay. The storytelling by Angie Ellington as she ties everyone stories together combined with the excellent narration from Meg Price makes this an enjoyable, sweet romance all the way around.

Great summer romance! Really gives me that feeling of being by the ocean with love in the air — highly recommend!

This is one of those short and sweet romances that I just adore. The characters were done well and easy to like but I found the story itself lacking. It could be because the story is too sort but the challenges the characters life was underdone. Still a great read with an awesome narrator Meg Price.

This book was given to me in exchange for my honest review.

Olivia and Brady a summer romance, to meet again, will it be a romance to last a lifetime. The audio by Meg Price was great for this enjoyable romance of second chances.
Given audio for my voluntary review and my honest opinion

Dancing by the Moonlight is a light PG/PG-13 beach read. They story ends in a good place even though it's obviously not finished. There were a lot of characters introduced and I hoped it would turn into a couple concurrent HFNs, but it didn't to the extent I'd hoped. There's always book two....

The narration was really good. There was one "storm" sound effect that sounded out of place because it was the only one, but overall I really liked the performance.

Olivia is back and so is Brady. They've both grown up and get to revisit their romance from years ago and work through their issues. Olivia is skeptical and who could blame her, Brady finally opens up and explains what happened. The story really evolved and was easy to follow. Loved the characters, especially Olivia's aunt! Can't wait to listen to the continuation of the story in Dancing by the Christmas Lights.