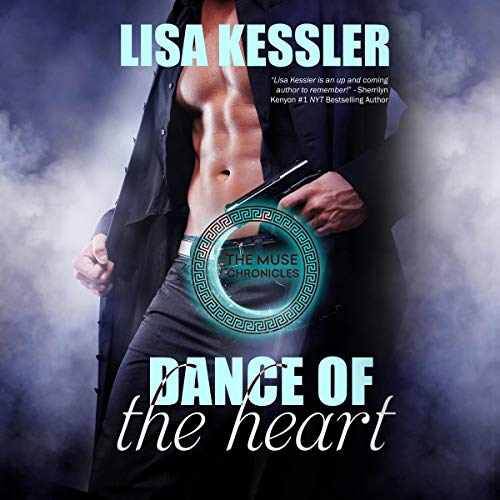 Dance of the Heart

By: Lisa Kessler
Narrated by: Gwendolyn E. Druyor
Try for $0.00

He's willing to lay down his life, to save hers....

Tera Muldoon not only runs her own dance studio, but she's also secretly the human vessel for the Muse of Dance. Having her name at the top of an immortal's hitlist isn't helping her social anxiety issues, but everything changes the day she hires a bodyguard.

Gavin Thompson is the best at what he does, and when his security company is hired to protect a dance instructor, he thinks it's business as usual. But no one warned him being with Tera would blur the lines between personal and professional interests. What started out as a job might be his only chance at a future he never dreamed possible.

They just need to live to see it.

The Prophecy - "Every generation the nine daughters of Zeus are reborn, and with their rebirth are also nine Guardians. They will be marked by the gods, and given gifts to protect his treasure. Their abilities will only be unlocked when they find their muse."

What listeners say about Dance of the Heart

Narrator does a good job. She has a nice tone to her normal voice, and then she also has a decent guy voice for the male chapters. A good listen!

Really love this series! It's great to see the story really evolving! I'd start with the first book in the series before starting this one, but each book is about a different couple. There's a storyline throughout the whole series, and past main characters have roles in this book. In this book, the muses are still in danger; especially with an angry, unruly god on the loose. Tera is one of the muses, the muse of dance, that lives on her own, so a bodyguard is hired to help protect her. Gavin is that bodyguard, but he's more than just a bodyguard to Tera. There's a pull between the pair, but in order for Gavin to perform best as her bodyguard, he needs to keep it professional. Gavin also isn't completely in the know, so that causes some tension. Tera's a bit quiet because she's had some trauma in her life, so she's a bit morose, but the connection with Gavin helps her open up. They are sweet couple, and the chemistry between the two is adorable. I love the muse scenario, love that the muses each have a guardian, and love how the story is unfolding! I love the dancing aspect! I've always loved dancing; especially ballet, so that was wonderful. The bits of action are great too! I really like all the characters, but I wish Tera would've used her brain a little bit more and stand up to her mother more. All in all, this book is entertaining and interesting. Excited for the next one!!

Tera and Gavin are great together! She is a very nervous person prone to panic attacks because of an overbearing mother. He is a strong Alpha male who brings out the best in her and makes her feel safe and confident. Tera is so much better at expressing herself with dance than with words. The action reaches one conclusion here but they find out it might not be the end. The narrator did an awesome job in this story as she has in the others and it makes the story go by so quickly, leaves me wanting to know more. I am looking forward to the final book in the series.