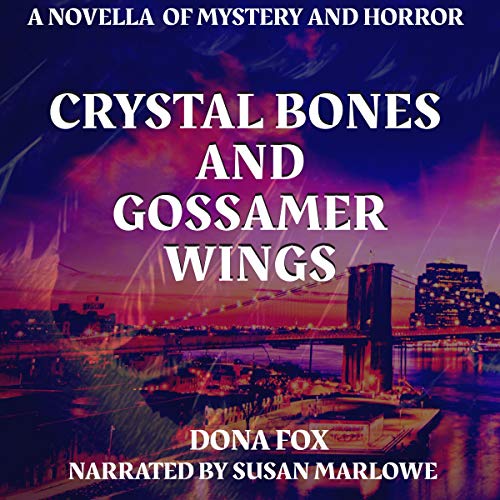 A box full of newspaper clippings, photographs, and tiny bones found under a dying woman’s bed leads to the discovery of the existence of an unusual group of children. Kept apart, these children grew up believing their fathers were the wealthy mortal men who had wed their pregnant mothers. One of these children was named Crystal; she was raised by a scientist who was obsessed with the secret of winged flight. Her mother died during one of his tests, and Crystal was sent to a foster home.

As an adult, she's searching for her father, while strange furies rise within her that become harder to control. Can she find her mortal stepfather? Will he have the answers? Can he tell her who she is, what she is, and what's wrong with her? Will she find the others like her before it's too late?

What listeners say about Crystal Bones and Gossamer Wings

The author, Dona Fox, is one of my go-to authors for short horror stories. Her descriptions are definitely creepy and you really feel like you are in the story, not just reading the story. At first, I was confused by this story, but by the end, the tale had enveloped me and all came together.

At the beginning of this tale, Crystal Violet is a young girl living with her widowed father. He is obsessed with learning to fly like Icarus and his delusions have already cost Crystal's mother her life. When one of her father's experiments goes too far, Crystal is placed in foster care and her father is sent to prison.

When Crystal becomes an adult, she uses her job with the FBI to try to find her father and her cousin, Max. She soon discovers that there is more to her father's obsession than she had been led to believe.

Ms. Fox once again weaves a tale that is full of abuse, fear, and total creepiness into this story. The narrator does a great job and adds a lot to this audiobook. I was given the chance to listen by the author/publisher/narrator and chose to review it.

This book seemed not to make sense in the beginning but came full circle in the end. Well rounded characters with good backgrounds. I don’t want to spoil to much I loved that it connected and they found out what they really were in the end.

Dona Fox is the Queen of Creep

Dona Fox never fails to weave a tale that has me so weirded out I’m looking over my shoulder the whole time I am listening. So much detail and description goes in to this creepy short story told from the point of view from several different children. Susan Marlowe does a great job of bringing all the weird and creepiness to life!!!

I enjoyed this novella. It is an interesting twist on Icarus. At first I was a bit confused until I realized it covered the lives of several women. The narration was good but maybe a pause before introducing the newest character would be beneficial. All in all, a good short story.

This was such a unique story and I loved it. Dona is one of my top 5 short story horror writers. Loved the characters. She is able to get so much story and development into a small space. Ms. Marlowe added to the story with awesome narration

This is the second audio book listened to by Susan Marlowe from a Dona Fox story. Again impressed by the authors writing and narrator's voice. Five stars.

I'm not sure exactly how to describe this short story other than to say that it's a strange one. I definitely enjoyed it though.

the put all kinds of twists and turns in this creepy story of suppence and horror. the author did a great job of telling the story. she had you listening to every nuance in the story.

Short story and one tries to figure out these characters and the house, with too many secrets. Bones under a bed, a man obsessed to fly. A chilling, haunted story. Narration was well done.
Given audio for my voluntary review

I think Dona’s writing style is great; I love the feeling of confusion that adds to the suspense-fulness of her stories.
I also think Susan is great at adding to the suspensful atmosphere and she is a great narrator.
I definitely think I need to listen to this one again as, maybe I was distracted, but I found myself a little lost at times.
I love that this is longer than Dona’s other books at nearly 2.5hrs.
This is my honest unbiased opinion of a free review copy.

This novella has several threads interlaced. As the wonderful writing is expertly narrated we are drawn in, as listeners, to witness their untangling and to be rewarded by a great story. The characters are believable and well written and I had great empathy for the central character. An excellent listen.