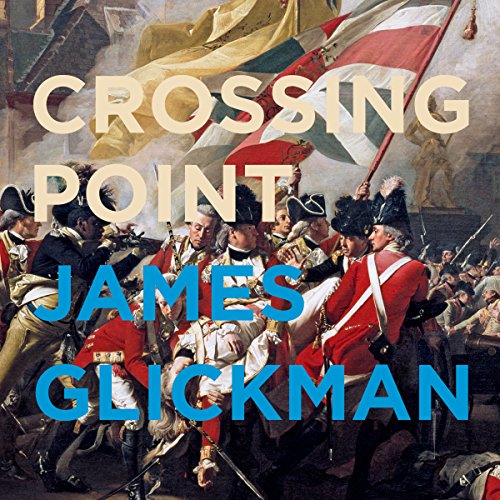 By: James Glickman
Narrated by: J. Scott Bennett
Try for $0.00

Based closely on the known historical record, Crossing Point brings to life the American Revolution in all of its bloody detail.

When the Revolutionary War begins, Guy Watson is a slave to the Hazzard family in Rhode Island, but he is soon engaged in service for the American army by Samuel Ward, head of one New England's most prominent families. Torn about leaving his beloved June and the other slaves who have become his family, Guy eventually sets out with Samuel Ward and a battalion of men on a treacherous and legendary trek to Quebec.

The two men experience the inevitable toll the brutality of war takes, and it changes them forever. Upon their eventual return home, they come to realize the cost of war not just for those in battle but also for those who stayed.

Crossing Point vividly shares a little-known chapter in the national founding and raises the question of what justice was fought for by the men who faced an uncertain freedom when the last shots were fired.

What listeners say about Crossing Point

This listen is long, but thoroughly engaging. The reader is terrific after the first ten minute (hang in!) and his accents of the various characters are wonderful.

This historical novel is beautifully written. It provides insight into the American Revolution through the eyes of real families instead of politicians. It traces the impact of the war on two soldiers in particular – one who entered the war as an African slave but ended as a free man. The other is a younger white colonial man who entered the war still nervous around the woman he wants to marry. A third thread involves a family who are trying to help destroy the rebellion as secret loyalists to the British crown. All three are from Rhode Island and give us a view of the war from their contrasting perspectives. It is refreshingly different from the usual historical focus on the political dramas in Boston and Virginia.

There are many aspects of this book that “opened my eyes” to the reality of the times. Several parts are a good companion to Jill Lepore’s “Book of Ages: The Life and Opinions of Jane Franklin” about the experience of Ben Franklin’s sister during the war. Both provide insight into the practical impact of the war on daily life. Both books tell us more about the reality of living through the time of the revolution: the constant uncertainty about the future, the shortages, the difficulty of getting news, and the threat of sudden evacuation or invasion.

Crossing Point goes further and offers this practical perspective through the eyes of many different people, notably including a pair of slaves who were in love and had yet another uncertainty in their lives – whether they would be sold and thus separated even after they were married. This book educated me about the reality of slavery in northern colonies, which is rarely mentioned elsewhere. Detailing the life of this pair brilliantly revealed the horror of slavery in an ordinary way that makes us identify with them and root hard for the resolution of their problems as individuals and not just as statistics in a brutal system. As a woman, I related particularly to June, the female in the pair, who was sent for a while to another family in a Rhode Island city. She struggles to fit in with the other slaves there who are strangers to her as well as to fulfill the work expectations without getting in the cross-fire of an attack on the city. All the while she tries to learn something about the war elsewhere and the fate of her husband who has been sent to fight in it.

Her husband, Guy, along with other characters we are following, is sent on a “mission impossible” with a small group of soldiers who trek to Canada through the backwoods in order to cut off British supplies. As winter descends, the soldiers become desperate. Guy, with the precarious status of a slave during the expedition, becomes the target of one soldier in particular who wants to make him the scapegoat for their problems. As all the soldiers struggle through practical difficulties of survival that are described in vivid detail, Guy has the additional burden of his race and status. The savage realities of survival, of war, of slavery, and of racial hatred all stun the reader during the tale of this expedition.

I also found particularly compelling the story of a slave named Lucy who was forced to submit to sexual relations with a young master and then became pregnant and has a baby boy. She wants to tell her masters that it is their grandson, but an older slave woman strongly advises her against it because only Lucy will suffer. Lucy’s solution is to run away to a life where selling sex is the only means of survival, but it enables her to keep her “tea-color” baby secretly. When she is caught, she is whipped for being a runaway. Gus and June have to watch this punishment along with other slaves as a warning against escape. As the lashes continue, Lucy becomes unconscious and bloody even though she is not receiving the maximum punishment, whose brutality seems beyond imagination. Her experience speaks symbolically to the plight of so many victims in the history of the world – whatever she does, she loses.

It is not possible to describe the ending of this compelling book without a spoiler, but it suffices to say that the ending is well foreshadowed and the story threads are satisfactorily resolved without loose ends. The afterward then answers our questions about the further developments in the lives of the real people described in the book.

The book provides the reader with an education about the practical realities of the Revolutionary War for individuals, and it provides a deeper understanding of the political and social problem of slavery and racial animosity that has plagued our country from its beginnings. I highly recommend it for anyone who loves history as told from the viewpoint of seemingly insignificant people. The political leaders who signed the Declaration of Independence pledged “to each other our Lives, our Fortunes, and our sacred Honor.” The ensuing war just as deeply affected those who made no pledge, had more modest or no fortune, and very private honor. This book is for them.