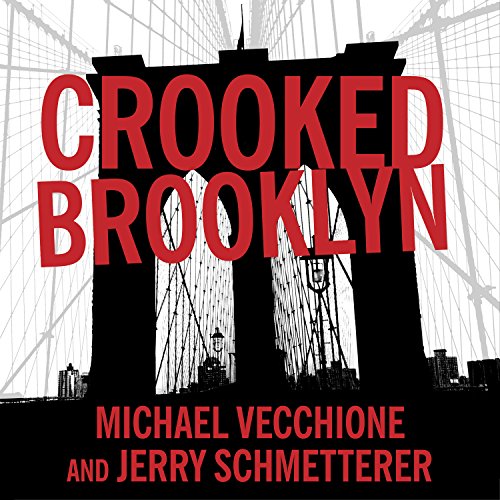 From 2001 to 2013, Michael Vecchione was chief of the Rackets Division in the Brooklyn District Attorney's Office, which was the largest urban prosecution agency in the country. Vecchione grappled with organized crime and dirty politicians, during which he supervised, investigated, and prosecuted major felony cases.

Crooked Brooklyn is a gritty story of corruption, greed, and law enforcement. Vecchione navigated a political minefield and expertly rose to the judicial challenges of directing investigations into a wide variety of crimes, from bribe-taking judges to cold-blooded killers. He was responsible for taking down three state Supreme Court judges, one of the most powerful political bosses in the country, two cops who worked as assassins for the Mafia, and a corrupt oral surgeon who was secretly selling bones from the recently deceased to medical supply companies. Unbelievable and unforgettable, Crooked Brooklyn is a story that will appeal to fans of Law & Order, readers and listeners of true crime, and those hungry for details about the system that keeps us safe.

"A gritty real life view from the front lines." (Nicholas Pileggi, author of Wiseguy: Life in a Mafia Family)

Being a former boss in Law Enforcement, as the commanding officer of inspectional services/special investigations unit for NYHP. It was a privilege having experienced working with the people mentioned in this book The best of the best, and the Brooklyn District Attorney's Office, over my 30 years on the job. When requiring assistance and Conducting joint investigations. when bringing cases to their attention that was always looked at thoroughly and efficiently and made sure probable cause and the proper evidence warranted investigation. I believe this book was very factual, realistic and authentic. I think everyone in Law Enforcement who believes in what they Took an oath to do should read this book, and learn the struggles stress and dedication this office has, to bring justice to everyone we serve. Congratulations Mike on the book, and the Brooklyn DAs office your the backbone of the city. thank you for job well done, Chief SIU Retired.

one of the best books I have read in a long time .

this is the second book I have listen to. I enjoyed the entire book. living and growing up in the new York metropolitan area I found this books accounts accurate but yet entertaining. I can't wait to read his next book .

Overall I would like to say that I liked the book, Crooked Brooklyn. My only issue with the story is the length. The book has some very interesting stories and people but I feel like most of them are brushed over. This book almost seemed like an abridged version. Maybe M.V. Is saving the in-depth stories for another book.