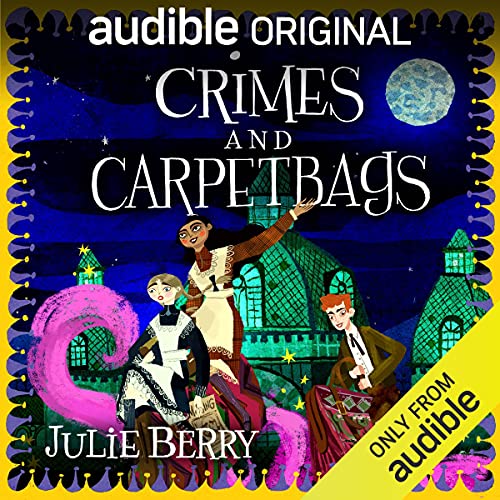 By: Julie Berry
Narrated by: Jayne Entwhistle
Try for $0.00

Now that Maeve Merrit has surrendered Mermeros, the djinni she found in a sardine can, she expects her life in London will be dull as dirt. Mermeros, however, has other plans. Maeve’s friend Tommy, a former orphan, has been adopted by Mermeros’s newest owner. When Tommy’s new father tries to use one of his wishes, he and Mermeros go missing - and without a guardian, Tommy will be forced back to the orphanage.

Maeve, Tommy, and their friend Alice embark on an adventure full of magic, danger, and flying carpetbags to rescue Tommy’s father and the djinni they’ve grown to love. But will they come to their rescue before Mermeros’ fabled wishes fall into the wrong hands?

Julie Berry is the author of the New York Times best-seller Lovely War, the Printz Honor and Los Angeles Times Book Prize shortlisted novel The Passion of Dolssa, and many other acclaimed young adult and middle-grade novels, as well as several picture books. She holds a BS from Rensselaer Polytechnic Institution in communication and an MFA from Vermont College. She lives in upstate New York with her family.
Photo by Travis Tanner

Jayne Entwistle is a voice-over artist and improvisational actress whose journey in audio has taken her on an adventure from her birthplace in northern England to sunny Los Angeles. She is best known for narrating Alan Bradley’s Flavia de Luce mysteries, a series that has won her three of her numerous AudioFile Earphones Awards. She is also a recipient of the 2015 Odyssey Honor Award for The Scandalous Sisterhood of Prickwillow Place and the 2016 Odyssey Award for The War that Saved My Life.

What listeners say about Crime and Carpetbags

Great second outing by Maeve, Alice, and Tom into a Victorian London society largely unaware of magic. Entwhistle’s narration continues to amaze, especially with her accents and her ability to uniquely voice multiple teens without making them sound like they’re sucking helium (her pacing still benefits from 1.3x speed, though).

The central plot concerns the disappearance of Tom’s adopted father and the irascible genie Mermeros. While this provides a diverting mystery, it sadly leaves us without the humor that comes from our trio’s interactions with the charming curmudgeon of a genie until over halfway through the book. The introduction of other magical items helps, but magical carpet bags that don’t talk only take the humor so far. Ultimately, not as fun as book 1, but still an enjoyable listen. I love that this book involves the parents and grandparents in the adventure.

Contains zero profanity, politics, or religion, and touches upon poverty, orphans, and the beginnings of the Industrial Age without overshadowing the story. There’s even a nice author’s note at the end on the history of the Crystal Palace amusement venue. Great for kids of all ages.

Just as good as the first book!!

Often I find book two or after just isn’t as good as the first. Not so with this book. Even though it’s a book for children I enjoyed both of these books and I really enjoyed the authors narration at the end about the Crystal Palace and life back then.
Of course the narrator Jane Entwhistle has such a wonderful voice and she does it so well.
I look forward to the next book whenever that is!

For Children or Me or BOTH

A fun story that captivated me.... not Harry Potter but some lovely magic! LOVED the author’s notes at the close of the book‼️

I loved Wishes and Wellingtons and was thrilled to discover there was a sequel. It was just as exciting and adventurous as the first and I enjoyed every bit of it!

This was a fun story with a twist of a genie! It is appropriate for all ages.

When I saw this in the “suggested for me” queue I wasn’t sure they got it right. But being the adventurous sort I decided to give it a go. After all, how dreadful could it be?
I can honestly say... it wasn’t dreadful at all. In fact I thoroughly enjoyed every twist turn and bit of adventure.

It was a great sequel and I recommend it to children who enjoy fantasy and to adults who enjoy a fun read.

Good clean fun. Performance was enjoyable to listen, with the many voices well done.

Loved this sequel to Wishes & Wellingtons!!!

Curious about present day children's books, I discovered the inventive, engaging and funny Wishes and Wellingtons during the Covid lock-down and absolutely loved it! (Kudos to Audible for offering a selection of their books free to students!) When I discovered this past weekend that Julie Berry had written a sequel, I was thrilled to revisit these characters and delighted by this new story, which is warm, fun and exciting. Maeve is heroic, fearless and funny - irresistible! Both stories feature such deep, wonderful relationships. Jayne Entwhistle's narration is perfection. What a wonderful reader! She's so impressive and I can't imagine anyone else narrating these books. I hope Julie Berry writes another sequel. I'm recommending this book to readers of all ages - from girl hatchlings to adult readers who enjoy a great story and memorable characters!

Something for all ages

This was a cute and fun story. Not one that I would typically havedwould listen to but I really enjoyed it and glad I fav across it.
I think my 12-year-old granddaughter would enjoy it as well so it’s something for all ages.
The narrator did a great job.