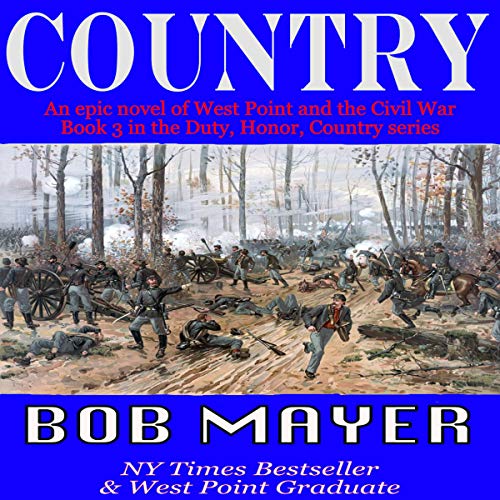 This is audiobook III in the Duty, Honor, Country Trilogy.

They swore oaths, both personal and professional. They were fighting for country, for a way of life and for family. Classmates carried more than rifles and sabers into battle. They had friendships, memories, children and wives. They had innocence lost, promises broken and glory found.

Duty, Honor, Country is history told both epic and personal so we can understand what happened, but more importantly feel the heart-wrenching clash of duty, honor, country and loyalty. And realize that sometimes, the people who changed history weren't recorded by it. In the vein of HBO's Rome miniseries, two fictional characters, Rumble and Cord are standing at many of the major crossroads of our history.

We start with Mark Twain in Confederate grey, waiting for a Colonel of the Illinois militia, U.S. Grant in Florida, Missouri. From West Point, to Washington DC, through First Bull Run, the Monitor battling the Merrimac, to Grant's initial successes at Forts Henry and Donelson.

We end on the precipice of failure as Grant's army is routed on the first day of the battle of Shiloh and sit in the rain, under an oak treat, contemplating retreat.

“A treat for military fiction listeners.” ( Publishers Weekly)
“Mayer has established himself as one of today's better military writers. A background in the Infantry, West Point and Special Operations gives him credibility and understanding from having been there and done that.” ( Airpower Journal)