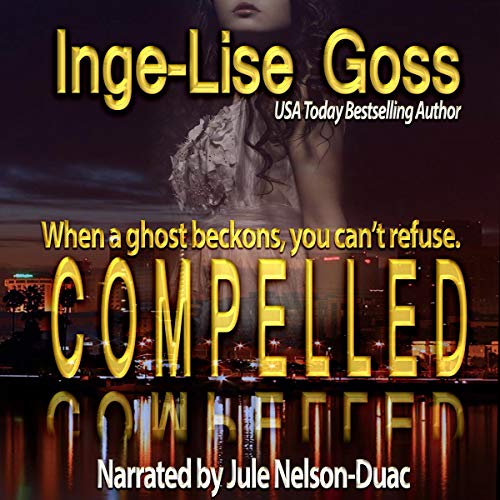 By: Inge-Lise Goss
Narrated by: Jule Nelson-Duac
Try for $0.00

New York Detective Sidney Langston is rushed to the hospital with excruciating chest pains the same night a woman who bears a remarkable resemblance to her is murdered in San Diego. Tests reveal Sidney is perfectly healthy, yet the crippling pain persists until the dead woman reaches out from beyond the grave for Sidney’s help to vindicate her wrongfully imprisoned husband and to find her murderer.

Desperate to remain pain-free, Sidney embarks on a mission to exonerate an innocent man. With a ruthless killer at large, she soon discovers the crime is more than a simple whodunit when dangerous scenarios unfold. The dead woman’s spirit relentlessly pushes Detective Langston to solve the crime and correct an injustice - or forever be tormented by an invisible bullet wound.

What listeners say about Compelled

Murder Mystery with a ghost behind it all

Sidney is now a police officer on Long Island in NY. She used to be a CIA operative so she has some skills that a regular police officer might not have. A psychic contacts her about a ghost who has been unrelenting in trying to reach Sidney through the psychic. Sidney rejects the contacts until she is provided with some facts that cause her to relent.

Sidney is home on sick leave with unrelenting heart problems that the medical experts can't explain. When she agrees to look into the case, she feels much better. She flies out to San Diego to investigate a case of a man accused of killing his wife. The police are certain that they found their man so they didn't do a complete investigation.

Sidney brings on some help in San Diego and uncovers a complex plot. She develops multiple leads and a few potential suspects. All the while, she feels the presence of the ghost urging her on and making her have strange reactions about some people in the story.

I enjoyed the book and I liked the complexity of the investigation.

I listened to the audio version, which was excellent.

The author provided me with a copy of the audio book. This is my honest review.

This book will keep you guessing until the end

Compelled is a classic who did it book, with a paranormal twist. It’s an exciting book that will have you at the edge of you seat and keep you guessing right to the last moment. The characters and plot line are great and the narrator knows how to spin the tale, so it gets even better. I can warmly recommend it for fans of mysteries and crime novels.

I was very fortunate to receive a free copy of Inge-Lise Goss Compelled audiobook. The story was amazing. It bought the characters to life.

Sidney Langston is a New York Detective who is experiencing some supernatural incidents that drive her to solve a murder mystery for her own piece of mind and to remain pain free from a “sympathy” bullet wound. Set to discover the true murderer, Sidney hopes to help the dead rest and free an innocent man.

Compelled is a great listen. Compelled is written in such a way that you get all of the details and still stay engaged. The author does a great job making Sydney a down to earth character that still is the hero. There are twists and turns throughout the story and when you think you have it figured out, we get even more details. The ending of Compelled left me satisfied with the story.

Jule Nelson-Duac provided the narration and did so wonderfully. She gave each character a different voice and was easy to listen to. Her cadence was measured and added to the storytelling.

There were no issues with the production or quality of the audio.

The most exciting book I have read for a while

This book keeps you engaged from page 1 to the end. There are so many twist and turns you don’t know what is going to happen next, the culprit could be any number of people.