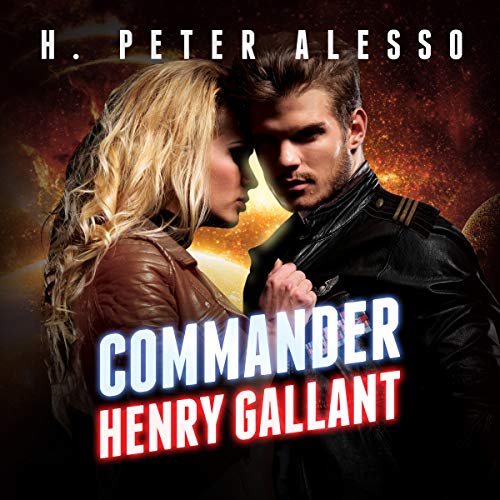 By: H. Peter Alesso
Narrated by: Theodore Copeland
Try for $0.00

Follow the career of a young officer in the 22nd-century genetically engineered space navy.

Henry Gallant thought Alaina loved him, but now she's found someone else. A tidal wave of loss and grief sweep over him, leaving him undecided about what to do next, or how to move forward.

Despite his sorrow, he goes on a dangerous mission to an invading aliens' home world in the Gliese-581 star system. There he uses a neural interface to penetrate their communication network and steals a high-ranking alien's identity. Through this artifice, he learns about their history and society and discovers a way to hinder and possibly defeat them.

A side effect of linking into the alien network - which was created for autistic savants - is that Gallant's mind is stimulated and enhanced to the point where he begins to experience superintelligence abilities.

Upon returning from his mission, there is concern that Gallant might pose a more serious threat than the aliens. While he struggles to fend off those who doubt his loyalty, he fights to win back Alaina.

The Saga continues on a high note.

This enjoyable series keeps up its high quality and delivers a good story with interesting characters.


The Narrator delivers the goods and makes the experience an enjoyable one.

Peter Alesso consistently delivers an exciting story full of action, betrayal and a little romance. Theodore Copeland also does and excellent job in telling the story.

Returning to the planet in the far off galaxy, Henry is eager to see Alaina once again.When he arrives things aren't as he hoped they would be. Alaina is surprised and shocked to see Henry again. She felt he must have either forgotten her or died since it's been a year since he was there. Politics for Alaina is even worse than it was when he was there. The old leader's son has started to instigate a revolt legally. But life for Henry can never be easy and he finds himself amidst a battle with the enemy. Then he returns to the planet only to find that Neumann, the superior officer in the area, has started to use his position to take marshall steps against the planet. Situations become very hot and dangerous and through it all Alaina and Henry must decide what to do.
Another fantastic story about Henry and narrated fantastically by Theodore Copeland !!

Well thought out plot and storyline .
Author did not spend too much time “inside main characters head”, but stayed true to form.
Recommended for 16+ years audience due to some violence and adult situations (It’s a war story! What else would you expect!)

The course of true love has never run smoothly for Henry Gallant, the only normal, unmodified genetically officer in the Fleet. Now with his own command ship, Warrior, he is able to return to Elysium where he had left his love, Elayna, as President trying to stabilise her society. He hopes that her feelings for him have remained.
Meanwhile, his former captain and enemy, Captain Neuman, the man who married his first love is also on the scene making life difficult. And Gallant's orders are to send Warrior into the heartland of the Titans, to spy on their communications and disrupt their activity.

Book four in the Henry Gallant saga, the book continues the romance from book two whilst still providing plenty of space battle action and some planet side also. A good, solid story again read by narrator Theodore Copeland with a pleasant modulation and good character voicings.

An enjoyable, easy to read series. My thanks to the rights holder of Commander Henry Gallant, who, at my request, freely gifted me a complimentary copy, via Audiobook Boom.