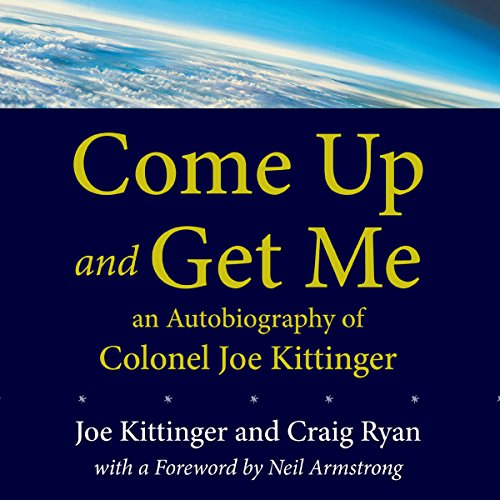 Come Up and Get Me

By: Joe Kittinger,Craig Ryan
Narrated by: Christian Rummel
Try for $0.00

A few years after his release from a North Vietnamese prisoner-of-war camp, in 1973, Colonel Joseph Kittinger retired from the Air Force. Restless and unchallenged, he turned to ballooning, a lifelong passion as well as a constant diversion for his imagination during his imprisonment. His primary goal was a solitary circumnavigation of the globe, and in its pursuit he set several ballooning distance records, including the first solo crossing of the Atlantic in 1984. But the aeronautical feats that first made him an American hero had occurred a quarter of a century earlier.

By the time Kittinger was shot down in Vietnam, in 1972, his Air Force career was already legendary. He had made a name for himself at Holloman Air Force Base near Alamogordo, New Mexico, as a test pilot who helped demonstrate that egress survival for pilots at high altitudes was possible in emergency situations. Ironically, Kittinger and his pre-astronaut colleagues would help propel Americans into space using the world's oldest flying machine - the balloon. Kittinger's work on Project Excelsior - which involved daring high-altitude bailout tests - earned him the Distinguished Flying Cross long before he earned a collection of medals in Vietnam. Despite the many accolades, Kittinger's proudest moment remains his free fall from 102,800 feet during which he achieved a speed of 614 miles per hour.

What listeners say about Come Up and Get Me

In my youth I read of Crossfield, Yeager, Grissom, Glenn, Shepard, Kittinger and the others who had "the right stuff". The "mission" related stories are all great, but this book gave me some depth and breadth across one of these characters, and it is a very enjoyable read. I'd like to see similar books from the other heros of this era.

Some may not like Joe's free and frank patriotic expression. For me Joe tells it like it was in that era. Ours it not to judge, but to appreciate what they lived through.

I really liked and recommend the later chapters. Joe and his wife keeps on giving. This book will not disappoint a historian, an adventurer, or any flyboy or flygirl.

A Life of "The Right Stuff"

I remember learning of Joe Kittinger's record setting sky dive back in 1960. I was, and still am, fascinated by the whole idea of a free-fall from space, and equally so by Felix's Baumgartner's recent space Red Bull Sratos sky dive following in Joe's foot steps.

I had no idea of the life that Joe Kittinger led before and after his historic free fall jump.

I have only two dings on this audio book..

First, it would have been fantastic to learn of Joe's thoughts on the work and final success of the Red Bull Stratos project during which he served as capsule communicator, (not possible since this book was completed well before Stratos succeeded) and second, I felt that the narration was jut too overly dramatic at times.

Taken on balance these are small points and this autobiography reveals an enjoyable story of a true adventurer.

Welcome to the rootin'- tootin'—and unexpectedly poignant— story of a Vietnam POW who went from ballooning to free-falling in outer space to making records every time he opened a hatch.

Kittinger was the guy that the military would use as a test pilot to see "what would happen" in extreme and emergency situations, miles above the ground.

His proudest achievement is a terrifying parachute drop from 19-and-a-half miles above the earth in 1960, where he reached a speed of 614 mph.

Military history and adventure story fans will love this guy. Kittinger is humble, funny, and someone you'd definitely want to have by your side in a tight situation

Great book I love it I really Loved iogt

I have 2000 skydivers and have been jumping out of airplanes for 40+ years and I love all the history this book gave. I still am amazed at what was done in a time before the digital age. and the courage it took to get it done.

Wow! Much more than a sky dive!

Loved this book. What an exciting adventurer. Loved America and not afraid of anything. Highly recommended..

More than just Manhigh and Excelsior

I really enjoyed Col. Kittinger's autobiography. I was hesitant to purchase it at first at the thought that it may be just Manhigh and Excelsior + Stuff, but I was pleased to find out that Col. Kittinger has had a very exciting and historic life. I've listened to the book twice so far, and plan to listen to it again. I think Christian Rummel emulates Col. Kittinger well.

Come Up and Get Me was published two months before Excelsior III's fiftieth anniversary, so no Red Bull Stratos (however, the audio book was published four days before Felix Baumgartner broke Col. Kittinger's record, with Col. Kittinger acting as the mission's capcom). For people who want to learn more about his role in Stratos, he's featured in almost every official video on YouTube. There's also a good documentary called "Balloon Men" on PBS, which is where I first learned about Manhigh and Excelsior.

The only issue I have with this book is that the forward by Neil Armstrong is committed, so the cover is a little misleading. Not really a big deal, though. I highly recommend this book.

I don't usually read biographies, and only listened to this one as I wanted to know more about Colonel Kittinger's legendary skydive, but Come Up and Get Me offers so much more.
From his early life and our force enlistment, to his involvement with Project Excelsior, the biography also details his exploits in Vietnam and his unpleasant time as a POW, and then his civilian aviation career, including balloon races and endurance records.
It surprised me, pleasantly.