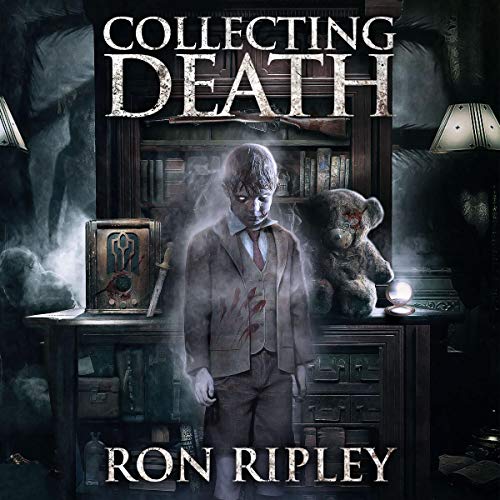 Rolf the teddy bear looks sweet and warm. But, in the dark, its eyes glow with a murderous gleam….

Stefan Korzh's parents built a life around collecting possessed items, in the throes of a peculiar game with the dead. Antique porcelain dolls, beautifully crafted teapots, and an eerie teddy bear, all seemingly innocuous objects that encompass unimaginable evil, and malignant spirits who wish to inflict pain on the living.

His parents' obsession ruined Stefan's life, and he dreams of punishing the rest of the world for his poor luck of the draw. Dreams become reality when he sends the collectibles to unsuspecting customers. One by one, he eagerly watches the chaos that unfolds.

Victor Daniels, a historian exhausted by yet another academic conference, wants nothing more than to go home and see his wife. But tragedy cuts his hopes of comfort short. Seeking answers, he teams up with a paranormal expert by the name of Jeremy Rhinehart. The two discover a tangled web of haunted collectibles gleefully painting the town red with the blood of their new owners.

Time is running out, and they must stop Stefan from spreading further mayhem. But Jeremy and Victor are in over their heads, and the hellish objects' spirits will not rest until their pursuers join the ranks of the dead….

What listeners say about Collecting Death

This was seriously awesome!! For me, it was the scariest of this authors books, that I've read! I've never liked those porcelain dolls anyway, they creeped me out, but after reading this... well, let's just say that I will never ever own one!! EVER.

Stefan Korzh grew up with his parents focused on buying haunted items. All their attention was focused on their passion and so Stefan was left unattended. Growing up in a house with ghosts made Stefan the way he is!! Now that both his parents have died, Stefan is intent on exacting revenge on people like his parents, people that actively seek out haunted items. So he starts selling off his parents items, all the while gleefully watching the ramifications unfold.

Victor Daniels is at a conference when he gets a call to say his wife committed suicide. Only thing is, his wife was happy and wasn't depressed. In fact, she had only just purchased a lovely old teddy off the internet. Victor is devastated and determined to get answers. What he finds though is a whole nother world!!

I started reading this at night and had to put it aside till the morning because it was creeping me out!!! I don't know if people actually do buy things simply because they think they're haunted, but let me tell you something, it wouldn't be me!!! Nuh uh!! I had nightmares of those nasty dolls turning their faces as I passed, it was horrible!! Anyway, the plot was fast paced and extremely scary. We have a teddy bear, a doll and a teapot. What do these all have in common? Well they are all haunted by homicidal ghosts. These ghosts are some of the worst that were in Stefan's parents collection. It was seriously creepy!!

I loved the characters. Jeremy was intriguing. I need to know more about his story. Victor is awesome. He is intriguing too and I'm really looking forward to learning more about him and his ancestors in future books. I also loved seeing and hearing the lore when they visited NOLA. Let's have more from there!!!

Anyway, this was such a great read. It's perfect for Halloween and is really scary. I can not wait for the next edition to this series!!!

Thom Bowers read this extremely well!! His tones and cadences really brought the story to life, and he gave me chills when he was the toys. Highly recommend.

I don't know how Ron Ripley does it, but it has me searching for every book he wrote. This is the best Narrator too!

Ron Ripley has been a favorite author of mine for several years. His books are always original & well written, and contain flawed but sympathetic & heroic characters that you quickly grow to care for. In this audio version of “Collecting Death,” Thom Bowers narrates & does a great job! Mr. Bowers’ voice is an excellent fit for the ghost/horror/suspense genre. It has an ominous/creepy Halloween quality I like, and it seems to capture your attention & interest quickly. Stefan is a great villain-in-training, and Stefan’s Dad (the ghost) is awesome, I love how he’s always yelling for Stefan randomly. I really hope we find out more about his dad’s ghosts!!! Rolf the bear was hilarious to me for some reason & Anne the creepy Bisque doll with the scary French song?!? OMG loved them, dolls are sooo creepy!!! Not sure why certain inanimate objects have such enormous fear-inducing capabilities, but dolls and ventriloquist dummies will forever share the #1 spot for “Life’s Creepiest Inanimate Objects” in my book. Jeremy & Victor are both interesting characters that I grew to really like! Excited to see what happens next! Great book in both audio & regular versions. I received this audiobook from Scare Street in advance in exchange for an honest review, thank you!!!

What a great story! I can imagine myself as an innocent, unsuspecting buyer of one of evil Stephen's haunted items. Hopefully Jeremy and Victor would find me before I was killed! Love the characters in this new series, and the narrator's voices for them. The doll and bear were especially creepy. I am looking forward to the next book in this new series!

He has done it again

Another winner by Mr.Ripley he is a good writer and the man who does the audio is good as well.

Enjoyed the narration, really brought to life the encounters with the ghost. Looking forward to book 2.

This is such an awesome story!! I loved all the characters and the ghosties 😱

One of Mr Ripley most disturbing & scary reads thus far !Just when you think you have read his best he turns out another more riveting than his last ! Awesome writer awesome talent ! This book has the making of nightmares !very well done .well narrated .thank you sir I look forward to the next !

Ron Ripley is one of me new favorites! His Haunted Collection Series was the first thing I listened to from him and I was hooked!
Everything does something different and I couldn't wait until Stephan Korzh got what was coming to him! I had to listen and find out if this was the time...I really enjoyed this series along with his other series/collections they are well worth reading, listening to.

I devoured this whole series!

It’s hard to find a good horror novel these days, and having bought this one, on a whim, I decided to give it a try, especially after throughly enjoying the Berkley Street series, and I wasn’t disappointed!!

I love how Ron Ripley writes. You are absorbed straight into the story straight away!!. Listening to this story, I felt myself imagining myself there and seeing all that was going on. Those poor people that received their deadly orders not knowing that they would die a horrible death was frustrating,I wanted to shout out and warn them!!. If you like scary ,horrible and gorey, then this is your book!!! Great!👍