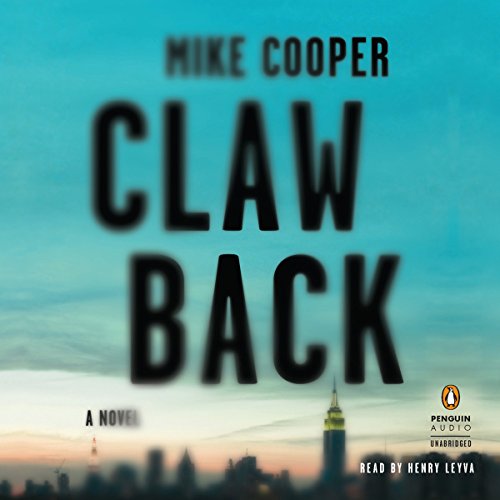 A tough, topical financial thriller that exposes the dark underbelly of Wall Street.

After a stint in the Middle East, black ops vet Silas Cade becomes an "accountant" - the go-to for financiers who need things done quickly, quietly, and by any means necessary. Silas is hired by a major player to pay a visit to a hedge-fund manager to demand clawback: the mandatory return of compensation paid on a deal that goes bad. But before Cade can tell his client that he got his $10 million back, the guy turns up dead.

And he's not the first. Someone's killing investment bankers whose funds have gone south. Silas's scrubbed identity, and his insider's perspective, makes him the ideal shadow man to track down whoever's murdering some of the most hated managers on Wall Street. With the aid of a beautiful financial blogger looking to break her first big story, Silas tracks a violent security crew who may be the key to the executions. But as paranoia and panic spread, he begins to wonder: is the threat coming from inside the game-or out?

Don't bail them out, take them out!

Mike Cooper's CLAWBACK is a smart, fast-paced thriller starring Silas Cade, a different kind of thriller hero. Cade has the appropriate background -- murky military stuff of the black ops variety -- and he demonstrates his fast thinking and fighting ability throughout the book; but he's also a Wall Street accounting with great brains and a seemingly endless supply of ever-ringing throwaway cell phones. But this is no run-of-the-mill ex-military, genius accountant. Cade's a high-stakes leg breaker, setting stuff straight not over 200 dollar shylock deals but multi-million dollar scams. In CLAWBACK, he's contracted to find out who's knocking off investment bankers -- and he enters the dangerous, twisting world of Mike Cooper's intelligent plot.

It's not just the plot that's smart. Cooper's writing is sharp yet smooth, and his characters, Cade and the supporting cast alike, are well-developed and nicely orchestrated, bringing every page of the book to life. The humor's smart, too, providing a nice counter-balance for the action scenes, which set the story afire.

These action scenes are made for the big screen. The fighting scenes, the chase scenes, and especially a central scene that combines both of these elements -- and a helicopter! -- scream "blockbuster movie!" I hope I'm right. That's a movie I'd love to see.

The narration of this audiobook is also dead on the money. The narrator's voice is a great match for Cade in particular, and he does a good job, moving across the various types of scenes, performing well through straight narration, dialogue, and action alike.

All in all, I'd highly recommend CLAWBACK to thriller and mystery fans, and most pointedly to anyone looking for a fresh take on thrillers and thriller heroes.

What made the experience of listening to Clawback the most enjoyable?

This book had action and a pretty novel premise. The "accountant" angle is a nice introduction and segue into the essence of the book. But after that, the book was raw, generally fast moving action. The author came up with a unique way to make sure that everyone (not just the good guys and the bad guys) was armed. By the end of the book, that was important and really enjoyable (if you like suspended belief action and surprises).

What other book might you compare Clawback to and why?

A little known but excellent book, Volk's Game. In both, the hero was not a "good guy." Instead he was a somewhat immoral guy who just didn't happen to be as bad as the "bad guys." Silas Cade here, however, did have some humanity. But it's refreshing to have a lead character who does some not so good things unabashedly and unapologetically for personal gain.

Light, but with limited range. He didn't portray Silas with the kind of drama like a Scott Brick would have; to do so would have ruined the character. Instead he almost bordered on whimsy, which was character suitable and which I initially liked. But as the book went one, he was not particularly strong in the action sequences.

No. This was not a "move me" book. It really can't be with so much gunfire. It also is not for the true-to-life adventure seekers. You need to suspend believe at important parts of this book. But if you do, and just visualize the action in your mind for what it is, the book is very entertaining

I got this book because I happened to pick up and read the next book in the Silas Cade series, Full Ratchet. I so enjoyed that book that I hunted this one down on Audible. I kind of wish I had reversed the order because I saw some of these characters coming from their parts in Full Ratchet. But the two stories were equally entertaining.

Auditors who don't care about absurd or implausible plots and possibly fans of action cartoons.

What was most disappointing about Mike Cooper’s story?

It has potentially interesting ideas and characters which are developed very poorly.