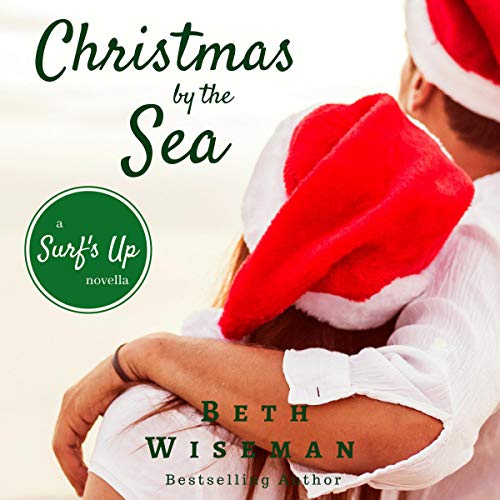 Christmas by the Sea: A Surf's Up Novella

Best-selling and award-winning author Beth Wiseman is a three-time Inspirational Reader's Choice winner, two-time recipient of the Carol Award, and winner of the coveted Holt Medallion.

Each Surf's Up novella takes the listener to a beach locale, weaving romance and adventure into a soul-soothing journey of hope.

Parker McIntyre is late evacuating Galveston Island prior to a hurricane, despite advisement from local Texas authorities. When Parker becomes trapped in rising floodwaters, he is going to drown if help doesn't arrive soon. Fearing death and questioning his faith, he thinks about the young son he'll be leaving behind.

Alexandria Hanson is on her way off the island to escape the immediate storm threat, but she spots a person trapped in the water. Alex - as she's called by friends and family - isn't adventuresome by nature. Helping the man is going to require great personal risk, but she can't leave him to die.

As Alex joins Parker in the murky Gulf waters, a dangerous situation becomes even more serious as they wait to be rescued. With only each other to lean on, they attempt to quell their fears by praying together and sharing stories. If Parker and Alex leave the island alive, will they have a chance to explore their feelings during the holiday season? Or will the opportunity be lost forever?

Other stories in this series: "A Tide Worth Turning", "Message In A Bottle", and "The Shell Collector's Daughter".

What listeners say about Christmas by the Sea: A Surf's Up Novella

Christmas by the Sea is a quick, sweet novella. Parker is injured during a hurricane in Galveston, and Alex finds him and saves his life. Parker begs Alex to find his son. They eventually find each other at the end of this short story. I enjoyed the story overall, but I wish there had a been a little more in it. It was a quick, pleasant listen.

Cecily White did a great job with the narration. I am excited to listen to her again.

So Short - I Want More

For a novella that is only a little more than an hour long, Ms. Wiseman does an excellent job developing the characters and making you feel for them. So much so, that it is hard to believe when it ends that its over already. It’s the shortest book for which I’ve ever had a book hangover. Though thinking back it was a complete story.

Ms. White does a great job with the voices. The changes in her voice during the hurricane are believable and help to further envision the scene. These two ladies make a great team.

The title makes one think of the happy memories of Christmas. While this is one of suspense, and a near death experience on Galveston Island. Resident were advised to vacate due to the hurricane. Parker was delayed leaving and now trapped in the raging waters. Thoughts of his son Spenser.
Alex late leaving the island driving and then seeing a head barely above water, and no circuit open to call for help. She risk her safety to help him, till help could come. Good suspense and brought out by the audio by Cecila White, Given ARC audio for my voluntary review and my honest opinion

Christmas by the sea

Great story!Very original plot.Very good narration by Cecily White.I was given this free review copy audiobook at my request and have voluntarily left this review.'

This was a lovely but short sweet story, that rounded off the box set very well.
There was some suspense with the flood, and lots of romance with a cute kid to boot.
The Narration was spot on and it was easy to tell who was talking, by the different voices.

I have really enjoyed this series.

I was given a free copy of this audio book at my request and have voluntarily left an honest review.

Christmas by the Sea

I loved this short novella! The heart pounding situation kept me on the edge, and I couldn’t stop listening.

A fantastic story by Beth Wiseman and great performance by Cecily White. I was definitely entertained!