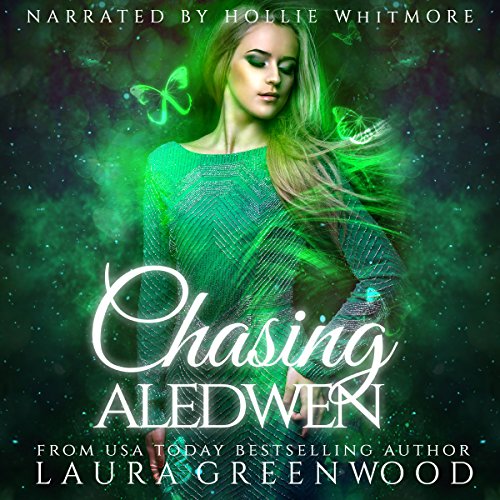 By: Laura Greenwood
Narrated by: Hollie Whitmore
Try for $0.00

No one said being a princess was easy, and for Aledwen, the fae princess of spring, it's even harder. Especially with her lack of magic and the upcoming Birth of Spring. A ceremony she should be performing for the first time but can't.

Luckily, she doesn't have to figure it out alone. Though at times, her shifter mates seem to be more of a hindrance than a help, and her elf's sense of duty may just override the bond between them.

Can Aledwen become the queen she was always meant to be? Or will she be stuck as a magic-less princess?

Chasing Aledwen is a reverse harem set in the Paranormal Council universe, and it is the first audiobook in the Fated Seasons: Spring series.

What listeners say about Chasing Aledwen

I really enjoyed this story and it’s take on the fae and the paranormal world within. Loved following Dwen on her adventure of figuring out the secrets of her past and reconciling them with her future. Can’t wait to see what happens with her mating bonds and what powers ensue. The narrator did an amazing job she is now one of my favorites. Don’t miss out on this original and enthralling tale.

No one said being a princess was easy, and for Aledwen, the fae princess of spring, it's even harder. Especially with her lack of magic and the upcoming Birth of Spring. A ceremony she should be performing for the first time but can't.

Luckily, she doesn't have to figure it out alone. Though at times, her shifter mates seem to be more of a hindrance than a help, and her elf's sense of duty may just override the bond between them.

Can Aledwen become the queen she was always meant to be? Or will she be stuck as a magic-less princess?

This book was very well written and very good, I really enjoyed it a lot and I can't wait to see what happens in the other seasons. I recommend if you like reverse harem and a good short read/listen thing give this book a try.

wow I love Laura she delivers a phenomenal story! this is well written and I love the narator! such a great audio!💕

Characters that are easy to connect with and a story that hold your interest. Sweet, romantic and recommended.

very good and interesting story . Its been a while since I've read the book so listening was good to remind me .

Better than the first book

Aledwen is the Spring Fae Princess and she has no magic. No one can know about this because she is suppose to take over for her mother and she needs magic for that. Aledwen is obviously stressed out. She also has to attend balls and be in public for the first time in her life. She meets her men and it seems everything may actually work out for her.. or will it?

I enjoyed this book more than I did Saving Eira. I like that Aledwen is so focused on making things better for her people. She doesn't care about the parties. She just wants to be the best queen for her people and I absolutely love that. Her men are all fine.. nothing too special.

Overall a good book. It is shorter so alot of things are rushed but I went in expecting that so it didn't bother me.

Interesting story about a fae princess who doesn't have magic, but can't become queen until she unlocks her magic.

Excellent RH with lots going on. Great action and lots of chemistry between the characters. Lovely modern day romance. Hollie does a fantastic job.
#audiobookobsessionreviewer

Fantasy at its best

Loved this story, presented well and enjoyable to listen to. Would like for a man to read the male parts tho as that's how I hear it when I read.
Fantastic story with twists and turns. Laugh out loud moments too.

There is so much story packed into this short story and I loved every second of it. The characters, the humour and the twists and turns that the story took. This is a series that I know I can listen to time and time again

Chasing Aledwen by Laura Greenwood is a paranormal reverse harem that I listened to on audio narrated by Hollie Whitmore.

I just love Laura’s books! They always leave me begging for more. I absolutely loved Aledwen and her four mates.

Hollie did a great job on the narration. I loved her voice and can’t wait to listen to more of her projects in the future.
I would recommend this book to anyone who loves paranormal romances or reverse harem novels.

I absolutely love this story. Amazing characters, storyline and narration. I truly recommend this book

I felt like something was missing, though I can’t place what. Narration was okay. Maybe it should have been a duo? I still very much enjoyed the book and story line!

this is another great reverse harem story set in this well build world. I really enjoyed following Aledwens story.

I felt as though the story was missing something. Maybe more details. But it wasn’t bad. I just needed more of the characters and the world they were in.

Aledwen is fighting against the traditional fae system, including her mother and she needs her power. She meets her mates and together, they sort out her issues to get her powers. It’s a fun RH with a few twists to keep the story interesting. This is part of a series and they make note of other books in the series but I felt like it could be read as a standalone.

Hollie Whitmore was good at playing multiple parts as well as keeping the pace of the story lively. She did a great job at keeping my interest throughout the book.

I really enjoyed the way that Hollie Whitmore brought these characters and this story to life. I love it when I forget about the narration and just get pulled into the story which is what happened here.

Having heard Aledwen mentioned in another book in this series I was really curious to hear her story. I was not disappointed, I really enjoyed this book. The world is slowly coming together over all the different books and I can see how they all intertwine. I enjoyed watching the harem come together and how the relationships built throughout the book. It was cleverly done.

Another amazing RH romance by Laura.
Premise was interesting, storyline flowed, conclusion was a little underwhelming, but they can’t all be a perfect HEA.
Hollie Whitmore did a nice job in narrating.