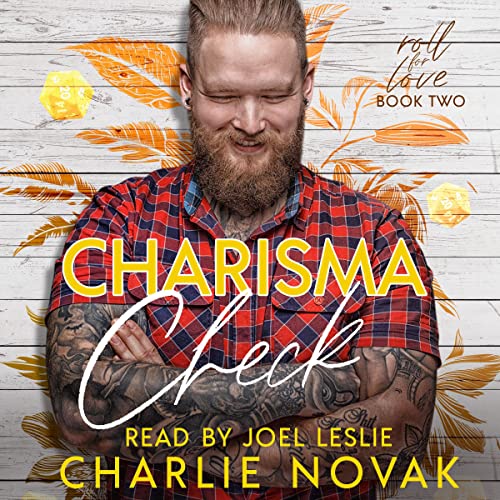 By: Charlie Novak
Narrated by: Joel Leslie
Try for $0.00

Edward and Izzy have been antagonising each other for over three years. Their rivalry is fierce, and Edward is determined to keep Izzy at arm’s length. Which would be all well and good... if they weren’t engaging in a secret, heated hook-ups.

Forced to appear together at a film premier in LA, Edward is determined to get in and out with minimal damage to his reputation... and his heart. But Izzy Montes proves to be a complication Edward couldn’t have predicted. Biting, funny, and charming in equal measure, he’s the one man Edward needs to loathe.

He’s also the one man Edward can’t get out of his mind.

Not that Izzy plans on letting him.

Charisma Check is a 80,000-word contemporary MM romance featuring comic conventions, snark, many costume changes, and only one bed. It is book two in the Roll for Love series and should be listened to as part of the series.

What listeners say about Charisma Check

I'm a geek and I love when authors write about geeks. This is a great story where both MC's are cosplayers and they hate each other.

This book was just amazing with both the cosplaying and all the emotions both have and the sorrow they went thru before they meet.

Another hit for Charlie Novak! So far I have never been disappointed by her writing style and great stories. Add in Joel Leslie's narration and you're in for a treat!
Edward was this intriguing and a bit mysterious character in Natural Twenty and it was obvious that there was something going on with his nemesis, another cosplayer named The Masked Gentleman.
And oh, was it funny to read what was really going on… despise-filled hook-ups in bathroom at conventions, a solid dose of snark and vitriol-laces remarks for three solid years, until they are forced to spend three days in closed proximity, which leads to them getting to know each other further than the hatred façade they always have on when they meet. This is when they start to thaw to each other and then there’s a sort of snowball effect from there.
I loved the banter, the book is fun and steamy and I loved how the characters don’t let go of their barbs even when they get together properly, that’s just how their relationship works.

I adore anything by Charlie Novak! But I have to be perfectly honest...Joel Leslie isn't my favorite narrator. I know Edward and Izzy are very proper and very British. But I felt a distinct disconnect with the story due to his manner of narrating. I'm sure this is a personal issue, so PLEASE give this a listen! The story is totally worth it.

Holy Moly, was this fantastic!!

Holy Moly, was this fantastic!! I was unsure of Edward from Natural Twenty, but he grew on me by the end of that story. This Edward we met had a ton of depth! Edward met Izzy (The Masked Gentleman) three years earlier at a time in his life when he was going thru some horrible family drama. Sparks fly between the two and they continue to meet at conventions. I absolutely loved the snark and banter between Edward and Izzy. The story was amazing, sweet, steamy, and funny, loved it!! Joel Leslie did a phenomenal job with the narration, loved it!!

Story: I must say that this story was quite a challenge for me. While I like difficult characters, the level of pigheadedness those two MCs presented was really trying. The level of animosity made me think they are twelve! :D They sure are complex and unique, but boy did I want to smack them upside the heads.
The story is entertaining and very well written. I was very curious as to how the author will make it work and I was not disappointed in the least. And the overall feel of the book, with the cosplay surroundings, was awesome and something I did not encounter before this series, so kudos for an original idea.
Narration: The accent in this one was a bit much for me at times, but that is mostly a personal preference. The voice is nice, the narration emotional and clear. It was easy to follow despite my non - native English speaker status.

More Below The Surface.

MM, Contemporary Romance. A fun story with snark, sweetness and heat. I laughed so much while listening to their story as it's so funny it really lightened my mood and was just what I needed, I really enjoyed it and thought that Joel Leslie's narration was perfect. Guaranteed HEA.

I'd loved the story first time around in ebook format, with the banter between Edward and Izzy, in their mock enemies relationship, they are too good to be truly enemies and there was always a spark between them.
Joel Leslie does a fantastic job of elevating the story, adding a little more bite to their interactions and his Edward voice is just perfect. I don't think I'll re-read it without hearing him saying the words.
Plenty of spice since their relationship is based on a benefits without the friendship basis.
Edward is one of my favourite Charlie Novak characters for his love of wearing clothing against gender convention and his love of toys.