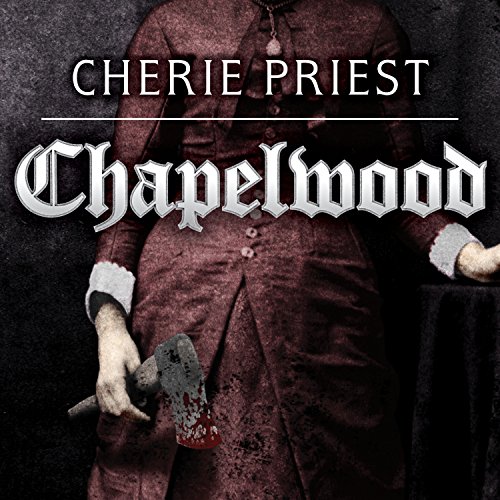 Birmingham, Alabama, is infested with malevolence. Prejudice and hatred have consumed the minds and hearts of its populace. A murderer, unimaginatively named "Harry the Hacker" by the press, has been carving up citizens with a hatchet. And from the church known as Chapelwood, an unholy gospel is being spread by a sect that worships dark gods from beyond the heavens.

This darkness calls to Lizzie Borden. It is reminiscent of an evil she had dared hoped was extinguished. The parishioners of Chapelwood plan to sacrifice a young woman to summon beings never meant to share reality with humanity. An apocalypse will follow in their wake which will scorch the earth of all life.

"[T]his book is even scarier than the first, with their monstrous opponents coming to almost total power through good old-fashioned prejudice and hate." ( RT Book Reviews)

What listeners say about Chapelwood

Note: While this is Book 2 in the series, it reads just fine as a stand alone.

Set roughly 30 years after the events that take place in Book 1 (Maplecroft), Lisbeth Borden is finding retirement lonely and boring. She orders books and papers, adopts feral cats, and keeps up an on going letter to her now dead sister Emma. Then the odd and gruesome events of Birmingham, Alabama catch her eye. Then an Inspector Wolf contacts her and asks her to join him on his investigation into the hatchet murders as he suspects that there is more to it, and also that Lisbeth has had some previous dealings with this particular evil.

While I enjoyed Book 1 more than this book, it was still worthy. Book 1 had all the mystique of the Lizzie Borden historical case tied to it even before I cracked open the cover. This book didn’t come with that mystique, so the story in and of itself had to build the anticipation and it did a great job of it! It’s early 1920s and Prohibition is still firmly in place. In Alabama, we have the True Americans group, which is trying to look a bit more respectable than the Ku Klux Clan and yet still trying to push politics and civil rights in the same direction. Unwed daughters, despite their age, don’t have the legal right to go against their father’s wishes on where to live or work. Essentially, it’s a hotbed of angry, dissatisfied people. Perfect for the summoning of Cthulu monsters.

Inspector Simon Wolf played a very small part in Book 1 but he is front and center here in Book 2. A dear friend of his, a Catholic priest, asks for his aid and he arrives too late to do much for his friend. But he does his best to assist the young lady (Ruth Stevenson) who befriended the priest. He often portrays himself as attached to a police office, but he’s not. No, his office investigates the unusual. Here in Alabama he’s still referred to as the Yank and he has to learn the niceties of Southern hospitality to get along with folks. Wolf is an interesting character being a gentleman, a man who enjoys a good meal, and the owner of a peculiar sense of humor.

Ruth is in her early 20s and is determined to get away from her parents. On the surface, her father is the typical abusive domineering patriarch of the family while Ruth’s mom is this submissive servant of her husband’s orders. She’s tried running away multiple times, but she’s always dragged home. Legally, she can’t go against this because she isn’t married. Her Catholic priest friend helps solve that by finding her a kind (if older) husband. However, Catholics are not accepted by the mainstream Protestant Alabama society. Her father doesn’t approve of Ruth’s elopement to a Catholic Puerto Rican. But what’s more, he joined the Chapelwood church and Ruth was suppose to join too. She’s key to the church’s sinister endeavors. She’s no fainting lily. Betimes she’s scared but she acknowledges that and then pushes on. She also has a strong sense of her personal rights and that makes it ever so much harder for those who want to continue on with their human sacrifices.

As you can see, we have an awesome setting. It’s a slow burn as all the people and aspects get into place. There’s plenty here to intrigue you so I was never bored with the book. Once we have everything in place, the pace picks up. Some of the characters already knew of the human-like monsters, while others have to be brought around to the idea. We even get to spend some time in the head of a former Chapelwood church member who feels the only way to hold off the tide of evil is to take out the designated Chapelwood sacrifices before Chapelwood can sacrifice them appropriately. Yeah. Totally chilling logic. It’s done very well and, as odd as it sounds, I saw why this character did what they did.

This story is a great mix of historical fiction and slow-burn horror. The historical basis made the story that much richer. You can tell the author put quite a bit of research into what was going on in early 1920s Alabama and into understanding how those events and politics and social norms came to be. The horror aspect is not all gore and violence. It’s about things so beyond our understanding that it can push the limits of one’s sanity. It’s not done in some big dramatic way. This isn’t a slasher flick. There’s sound logic and deep thoughts that go into why our characters do what they do, for ultimate good or evil. These characters are complicated and that makes me love or hate them all the more.

Plus the imagery of a 60 year old spinster taking up an axe to save the world is just too awesome!

The Narration: Both our narrators did a great job with regional accents. It required quite a bit of subtlety at times and it made the listening experience worthy. James Patrick Cronin even varied the speeds of his dialogue based on the regional dialect he was employing. Julie McKay’s performance of Ruth was excellent with that Southern sass going on.

NUMBER OF HEARTS: 4
When I finished Maplecroft (bk #1 of Borden Dispatches) I sent a message right away to Ms. Priest to ask when the next book would be out. Needless to say I was so beyond excited when Ms. Priest told me that that Chapelwood was coming out. I was so engrossed in Lizzie’s world and the monsters that she fought, that I make Chapelwood an auto buy on audible (which is how I read/listened to Maplecroft too). I will say I was a little said that the narrators changed. But as I listened I knew that the same narrators couldn’t be used. Chapelwood takes place thirty years after the events of Maplecroft (so make sure you read Maplecroft first, because what happens in Maplecroft is very important).
Chapelwood is the same but very different then Maplecroft, which made this story so awesome. I love the twists and turns that happened in Chapelwood. I really enjoyed how Lizzie gets sucked into the events at Chapelwood. I really enjoyed the new characters that we meet in this book. Ruth is a feisty character and I would like to know more about her.
I don’t want to give anything away because that is how I am. So if you are a fan of Maplecroft (which I would HIGHLY recommend you reading) then you will love Chapelwood.
I am not sure what is next for this series, but I do hope with the way that Chapelwood was left that Ms. Priest plans to revisit this world. There are questions that need to be answered.

Disclaimer:
I received a complimentary copy of this book from Netgalley & PENGUIN GROUP Berkley, NAL / Signet Romance, DAW in exchange for an honest review. This review is my own opinion and not a paid review.

Disappointed with the narrators

I really enjoyed the first of these books…and while you could read this one without reading Maplecroft and it would make good sense, certain backstory aspects feed into motivations here, so I bet you'd like it better if you read them in order like I did.

I was really pleased to see Simon Wolf, the visiting and mysterious inspector who piqued my interest in book one and get to know him as a character and see who he actually works with. Since this story takes place thirty years after the happenings of book one, Lizbeth is now nearer elderly and I think I like her even better as an old broad with an axe than I did when she was younger. I liked the connection between her and Ruth Gussman, the young woman at the center of the mystery. Nice resonances between their stories and personalities, even though they have vastly different backgrounds and lives.

Like book one, there is an open-ended aspect to the ending. While some things are resolved, others are not. That felt right to me--we don't typically get all the answers we seek, especially in situations swathed in secrecy and lies, so it makes sense to me that our heroes didn't get all the answer either. It's on theme for Lovecraftian horror in that way as well, with characters denying even to themselves what they have experienced to protect themselves and their sanity.

A great escapist read. I was very happy to have it during a stressful week.

Not as well paced or structured as Maplecroft but definitely worth reading if you liked Maplecroft. Some excellent character work and some excellent monster work especially at the end. Great performances by both narrators who can do a variety of ages and accents.

I really like all the Borden books. The performance of the audio book adds to a great book as opposed to distracting from it.

This one felt odd to me. I suppose I wanted it to pick up at a different spot in Lizzies life. The last few chapters are great so hang in there and it ends well.

I KEPT WAITING FOR IT TO START MOVING FORWARD ...

Two hours and forty minutes into the book, everyone is still talking around the subject. Okay, there's evil in Chapelwood. Dark evil. There have been murders. Ax murders. A bunch of them. The Klan rules and no one seems inclined to curb it. But none of this is gleaned from from actual events the reader witnesses. Not a single thing. Nothing.

I like the idea of the book. The concept is intriguing. I found the presentation endlessly talky. Sorry. Nothing happened at all. Nothing. Nor has anyone yet to tell me what is going on or why it's going on. Much too much exposition without ever getting to the point.

Maybe I'll go back and try again sometime when I have even unlimited hours to invest in waiting for something to happen.

Narrators are all very capable ... but they can't do more than the book allows ...

I understand this is the second book in a series. Having not read the first, perhaps that was my problem but I didn't feel any creepiness. Or much of anything. The character talk about horror, but I didn't see, feel, or sense current or impending horror. Nothing to draw me in nor anything into which to be drawn.