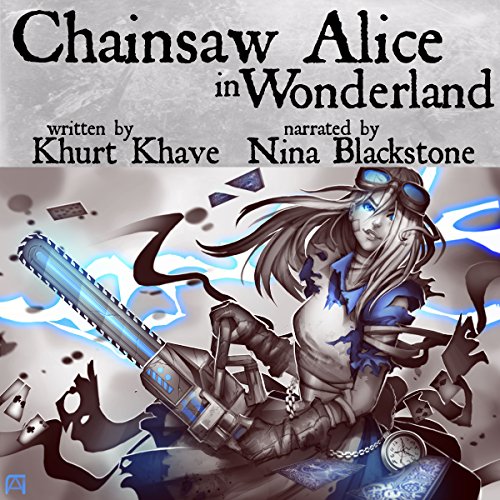 By: Khurt Khave
Narrated by: Nina Blackstone
Try for $0.00

Alice the chrononaut falls down an unmarked dimensional rift, or rabbit hole, which transports her to the wondrous lands as imagined by author Lewis Carroll.

But this is a very real place, as any parallel reality that can be thought of can be created. Wonderland is being torn apart by warring kingdoms, cruel monarchs, cosmic corporations, odd gods, and the forces of Cthulhu!

Characters from both Alice's Adventures in Wonderland and Through the Looking-Glass, and What Alice Found There are joined by a cast of Disney-like talking animals as well as fantastical creatures such as mermaids, faeries, trolls, and minotaurs. And then the fighting and fornicating ensues!

The SICKEST steampunk horror book ever written! It's like Lewis Carroll, H. P. Lovecraft, Jules Verne, Walt Disney and the Marquis de Sade threw an orgy/murder party; and you're invited!

The best written trash you will ever hear. Exactly what it sounds like and much worse than you think! All the sex and violence that was missing from the original Alice in Wonderland is now here! You will be ashamed for loving it! It's tentacular!

Try the insanity, it's delicious!

What listeners say about Chainsaw Alice in Wonderland

Entertaining at the Least Plus More!

Would you listen to Chainsaw Alice in Wonderland again? Why?

Yes I would listen to Chainsaw Alice in Wonderland Again and Again because there are so many entertaining details in each character in the book that you will perhaps delight in hearing a second go around that you might have missed the first time listening. Also, this was my first audio book and I adored all the characters being played out by the Narrator Nina Blackstone. I found myself listening for almost six hours nonstop in hopes I wouldn't miss any of the colorful characters Ms. Blackstone brought to life. I had previously read the book with delight, however, Ms. Blackstone's narration really seemed to make the characters jump out in detail from the book. Now I have the book plus audio, which I feel go hand in hand. Many people have told me they read a certain book before they go and see the movie so they can compare the two. I would love to see Khurt Khave's audio book spring to life on the big screen with all the interesting and colorful characters in the written word in the world of Chainsaw Alice in Wonderland.

My favorite character in Chainsaw Alice in Wonderland was of course The Weasel! In my opinion, the humor of the Weasel in the book definitely came out in Ms. Blackstone's verbal interpretation of his character.

Have you listened to any of Nina Blackstone’s other performances before? How does this one compare?

This was my first audio book, therefore, I can't compare this one with Ms. Blackstone's other readings. I can only attest to how much I enjoyed her interpretation of all the colorful characters in Chainsaw Alice in Wonderland.

It was and I did!

I can only sum up my listening to Chainsaw Alice in Wonderland as pleasantly enjoyable and entertaining PLUS when Ms. Blackstone took on singing the parts of some of the characters I laughed out loud in amusement. She did justice and more in verbally bringing to life the characters written into Chainsaw Alice's world by the author Khurt Khave. With Khurt Khave's written interpretation and Nina Blackstone's verbal interpretation I found them to make a great pair for ones enjoyment of Chainsaw Alice in Wonderland and I look forward to either a sequel to the book OR perhaps a movie in the works if I say so myself!