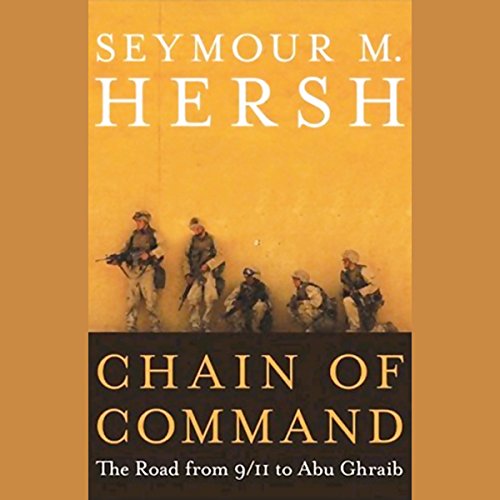 By: Seymour M. Hersh
Narrated by: Peter Friedman
Try for $0.00

Since September 11, 2001, Seymour M. Hersh has riveted readers, and outraged the Bush Administration, with his stories in The New Yorker magazine, including his breakthrough pieces on the Abu Ghraib prison scandal. Now, in Chain of Command, he brings together this reporting, along with new revelations, to answer the critical question of the last three years: how did America get from the clear morning when hijacked airplanes crashed into the World Trade Center and the Pentagon to a divisive and dirty war in Iraq?

Hersh established himself at the forefront of investigative journalism 35 years ago when he broke the news of the massacre in My Lai, Vietnam, for which he won a Pulitzer Prize. Ever since, he's challenged America's power elite by publishing the stories that others can't or won't tell.

In Chain of Command, Hersh takes an unflinching look behind the public story of President Bush's "war on terror" and into the lies and obsessions that led America into Iraq. With an introduction by The New Yorker's editor, David Remnick, Chain of Command is a devastating portrait of an administration blinded by ideology and of a President whose decisions have made the world a more dangerous place for America.

"Chain of Command is the best book we are likely to have, this close to events, about why the United States went from leading an international coalition...to fighting alone in Iraq and, in Abu Ghraib, to violating the very human rights it said it had come to restore....This book reminds us why tough, skeptical journalism matters so much: it helps to keep us free." (The New York Times Book Review)
"Mr. Hersh's work is necessary reading for anyone remotely interested in what went wrong and continues to go wrong in Iraq, and how the Bush administration came to take America to war there in the first place." (The New York Times)

What listeners say about Chain of Command

You owe it your country and our troops to become better informed about the status of our war in Iraq and the war on terrorism. Clearly, given the shifting stories from both sides of the political aisle and weak reporting on tv, you owe it to yourself to find other sources than politicians, spin artists and most broadcast news outlets. This is one source that provides explanations that fit the current situation and fill in the missing pieces of the puzzle.

I was interested in this book based on the author's prior writing on Abu Graib and Mei Lai, two events that were hard to even believe because they so contradicted our image of ourselves and the values of our country. But both were true and in many years of writing, Mr. Hirsch has been more right than wrong when he broke a story. Although the picture of the current administration is very disturbing, when I had the opportunity to read his sources, I found he had not mistated things. Since a lot of his sources are unnamed, you often have to trust the author but I think there is reason to do so.

A friend of mine in the Special Forces told me shortly after Bush declared "Mission Accomplished" that his comrades in Iraq expected an increasingly capable insurgency to mount a serious challenge to our occupation and he was right, not just because he was connected but because insurgencies often follow a predictable pattern. What is most interesting about this book is insight into how the current administration functions in spite of evidence and experience that contradicts their beliefs. At first I didn't feel that Iraq bore any relationship to Vietnam but as time goes on, I've come to believe that Iraq will be another war that cannot be won but one that costs us much more dearly.

Hersh is a quality journalist who is documenting the travails of a sitting President who could very possibly go down in history as the most corrupt Presidency in history. A Presdent that is more concerned with showing his macho then with showing leadership. A single President that is doing more harm to political stability of the world then any President before him. Hersh documents everything but that is my problem wth the book, it is basically telling the story of Afganistan and Iraq by rehashing what he has already published, and adds very little analysis that gives us new insight into the problems that he talks about. Still all in all a quality listen.

It comes as no surprise that Seymor Hersh has written another well written and well researched book, and it comes as no surprise that it's as entertaining to read as it is informative. Unlike so many of the "election time" books (Unfit For Command on the right, The Family on the left) This book is more than just unfounded libel, innuendo or poorly sourced junk. This is a book written by a veteran journalist and his skill shines through in the way he sources his work, and explains the nuances of the subject matter. In short, this book is a MUST READ (errr listen). As a bonus, the narration is excellent, but then, we've come to expect that from any product on Audible.com and they do deliver handsomly.

Reporting as it should be

This book brings you information in a factual, specific manner. It would appeal to readers with a good undertanding of and interest in current events. It will supplement your understanding of our world and the politics that shape it but a reader who has not followed current events or relies on "Fox News" would be lost. However, the Fox news junkie is absolutely the person who should read this. But for all of you fact/ real news junkies it is a must read. You will develop a profound respect for a real news journalist.

Reality is Showing Hersh to be Correct

I did my best to find some truth in this audiobook, but in the end, the book was a pattern of corruption (and yes, yellow journalism) explained clearly; which made it all the more frightening and stomach churning.

What passes for journalism is designed only to push a particular world view that is opposed to that of the President's views. It is not intended to bring truth and light but only another viewpoint of the opposition to the President's re-election.

If you believe this hooey, you might as well order you socialist membership card now. I am an avid reader of political science and history - especially on current issues. However, some pieces should be kept on the Fiction shelf from which they were spawned. Talk about making assumptions, this book takes the cake. Save yourself the hours of drool logic, and get it all in about 30 minutes of NBC. I am sure that this book was written by Katie Couric under an adopted pen name.

The author has only shown that anyone can take a plotical position, twist it and turn it until it doesn't evenly remotely represent what really happened.