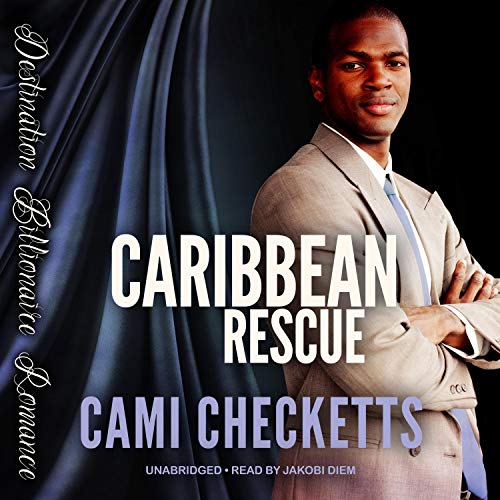 By: Cami Checketts
Narrated by: Jakobi Diem
Try for $0.00

Zack Tyndale was destined to win gold in the 2012 Olympics, but he tripped and shattered his own dreams. Running from his controlling father and the sympathy in everyone’s eyes, he buys an island in the Caribbean where he can live blissfully alone.

Madeline Panetto’s graduation present is a trip sailing around the Caribbean on her father’s yacht. Unfortunately, her father is a pirate, and when there is an uprising on his ship, she escapes and crash-lands on Zack’s island.

Can these two find refuge from the pirates and with each other?

What listeners say about Caribbean Rescue

I like a start story. It slowly escalates. a nice read but not quite enough DRAMA/Action for me. LOL! otherwise, VERY NICE. TY

Great fun adventure and good clean fun! I will be looking for more Books to come!

This was a decent read, but maybe more of a 3.5 for me than a 4. It's my first read from this author and it was a bit PG 13 for me, in addition to the drastic change the niece made in what seemed like minutes to talking to everyone and etc. I don't know. I already bought the 2nd installment, so I'll read it, but I'm not sure if I'll read any books past these 2 unless the 2nd one improves.

First book by my favorite narrator I did not love

First book by my favorite narrator I did not fall in love hearing.
I love Jakobi’s narration but this book did not live up to the storyline that was believable and romantic as I am accustomed to. A bit disappointed.

Jakobi always does a good job narrating! Good story line even though it's a PG romance.

I REALLY ENJOYED this book. The storyline was great They weren't having sex every five minutes. Zach was a true man that thought of others first and his friend Brooks too. This book should give hope to women, that good men are still out here. My most favorite thing about the whole book, NO PROFANITY. I REALLY LOVE IT.😁❤️

So cute, and dreamy .Just the escape I needed during tthis awful pandemic and craziness. LOVE CONQUERS hate always.

Quick Attraction on an Island

Too predictable. The author was repetitive in the characters thoughts and feelings. A struggle to finish.

First time I've read/listened to this author. It was okay. Nothing spectacular, I found it really frustration how they kept going back and fort about being with each other within à couple of sentences. Over and over... It was a little ridiculous.

loved the story and the narrator is one of my favorites. ready for the next book by Cami.