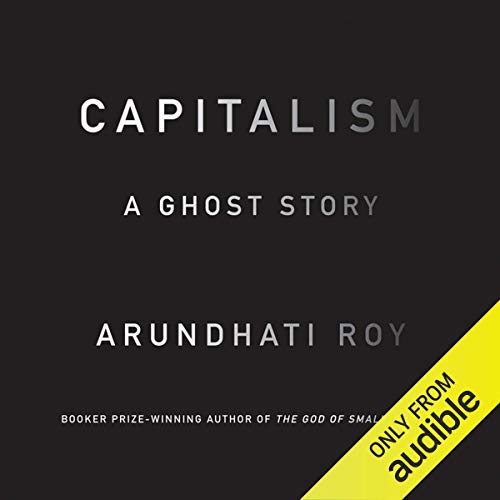 By: Arundhati Roy
Narrated by: Vaishali Sharma
Try for $0.00

From the poisoned rivers, barren wells, and clear-cut forests, to the hundreds of thousands of farmers who have committed suicide to escape punishing debt, to the hundreds of millions of people who live on less than two dollars a day, there are ghosts nearly everywhere you look in India. India is a nation of 1.2 billion, but the country's 100 richest people own assets equivalent to one-fourth of India's gross domestic product. Capitalism: A Ghost Story examines the dark side of democracy in contemporary India, and shows how the demands of globalized capitalism have subjugated billions of people to the highest and most intense forms of racism and exploitation.

What listeners say about Capitalism

Listening to Arundhati Roy's Capitalism: A Ghost Story was one of those experiences where you constantly find your mouth agape and brow furrowed in that "how-can-this-be" kind of way, reeling again and again over the ways in which Roy depicts the suffering and destruction that unchecked capitalism has wrought upon her country of India. The over extension of India's natural resources has resulted in total ecological obliteration – dead rivers, empty wells and stripped forests – and the imbalance of wealth and power has led to immense human devastation, with over 250,000 farmers committing suicide to escape crushing debt. But grisly statistics aside, it's Roy's unyielding courage in reporting these facts and condemning the powers-that-be which make this an essential listen.

A concise distopian report on India

Arundhati Roy is one of the best writers that I have ever heard. She is able to condense complex matters to a human level. What you will learn as she tells the tragedy of India is that the author is compassionate, committed, modest, fearless, factual, intelligent and indefatigable. Of course, she says nothing about her personal qualities but they shine through as she describes the sufferings of millions because of capitalism.

Since the United Nations is considering a woman for its next General Secretary, there would be no better candidate that Arundhati Roy. Now wouldn't that make the UN relevant?

Ruthless but eye opening to truth

Roy has refused to hold back in her book and exposes the truth of what capitalism has done for India. Cleverly written and a pleasure to read!

Narrator is quite bad

Frequent mispronunciations and it bugged me a lot. I’m an Indian and can say that these aren’t accent discrepancies either. For example the word Maoist is pronounced in a way I’d never heard before.

Best read for both, supporters and disagree to Arundhati’s.

People should not agree or like in 100% to any writer. Writers are artists and they make assumptions based on what they see or what they experience. There can be many things beyond it. Saying that I recommend this book to all the supporters and haters on few subjects of Arundhati. Must read.

Yes, it gives the understanding of a couple of conflicts in India and political unwillingness to solve an issue. The issues covered are very superficial. Arundhati never goes in logically explaining the issue, its passionate pitch but lacks ground. Misses major conflicts like Tamil, Bangladesh war, North East. Does not give all-round picture of the things. There bits and pieces of information but its scattered and losses catch.

Has Capitalism turned you off from other books in this genre?

Note really. It jumps from fiction to reality. Does not give hard evidence. Talks about politics at very high level.