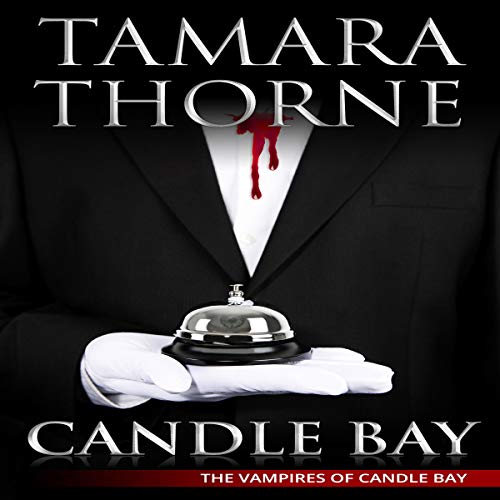 By: Tamara Thorne
Narrated by: Jamison Lee Walker
Try for $0.00

Chelsea Quinn Yarbro says, "Tamara Thorne has an uncanny knack for combining the outrageous with the shuddery, making for wonderful scary romps and fun reading."

Shrouded in fog on a hillside high above an isolated California coastal town, The Candle Bay Hotel and Spa has been restored to its former glory after decades of neglect. Thanks to its new owners, the Darlings, the opulent inn is once again filled with prosperous guests. But its seemingly all-American hosts hide a chilling, age-old family secret.

Lured to the picturesque spot, assistant concierge Amanda Pearce is mesmerized by her surroundings - and her seductive new boss, Stephen Darling. But her employers' eccentric ways and suspicious blood splatters in the hotel fill her with trepidation. Little does Amanda know that not only are the Darlings vampires, but that a murderous vampire vendetta is about to begin - and she will be caught in the middle. For as the feud unfolds and her feelings for Stephen deepen, Amanda must face the greatest decision of her life: to die, or join the forever undead.

What listeners say about Candle Bay

It started out a little slow but stick with it totally worth it. The story was entertaining and a different take on a vampire story. I enjoyed the story and can't wait to find out what happens. The narrator was good with all the voices and believe me it was a little hard to figure out who was who at first but once you got into it the book was very entertaining. I need the second book please.

A slow burn, but cliffhanger end?

I was given a free credit for this book, it's not my usual genre. It was good, but a very very slow burn. After all that the end was disappointing.

Candle Bay has the trappings of a bad 80s horror movie and a few of the characters are slightly over the top. It's a vampire romance, heavy on the vampire, and gory on the romance side. The Darlings manage a stately hotel and spa and they are all very good looking vampires. Stephen, Natasha, Orion, Lucy and Ivy all have a role to fulfill and they do it in a unique fashion. Julian Valentyn is the vampire who holds the secrets and who takes center stage in this story. He makes references to "the father" that become clear as the story goes on. Stephen Darling catches the eye of the new front desk clerk, Amanda, but so does Julian. The story is a good one, but there are too many secondary characters to keep track of and too many POV. Some of the storylines are gruesome, particularly those of the evil twin sisters, but Natasha the Feminazi had to have been the worst. When the secrets of the hotel start to emerge and other vampires want to claim them for themselves, the past is going to be revealed. The ending came a little too quickly and with little satisfaction. Perhaps there is more for Stephen and Amanda, after the kiss. Jamison Lee Walker does a good job as the narrator. You definitely know when he is speaking as a vampire!