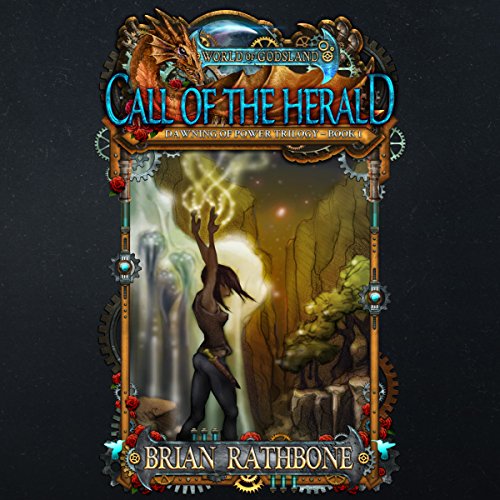 Call of the Herald

By: Brian Rathbone
Narrated by: Chris Snelgrove
Try for $0.00

Echoes of the ancients' power are distant memories, tattered and faded by the passage of eons, but that is about to change. A new dawn has arrived. Latent abilities, harbored in mankind's deepest fibers, wait to be unleashed. Ancient evils awaken, and old fears ignite the fires of war.

Call of the Herald is book one of The Dawning of Power trilogy.

What listeners say about Call of the Herald

The bad: the whole book is one track, so listening in multiple sessions can be tricky.

The good: this is an amazing and amazingly absorbing tale of how the lives of a group of young people become transformed by events totally beyond their imagining. Catrin Volker is a wonderful strong female lead who doesn't fall into the "male" pattern - she remains herself throughout. A great read that I highly recommend for adults and teens!

Um, I can't think of anything bad to say about this book.

Would you listen to Call of the Herald again? Why?

In fact, I plan on reading the entire series to date again now that I've been reintroduced in a new way.

What was one of the most memorable moments of Call of the Herald?

At one point, Catrin is chastised playfully by her companions. This literally brought a smile to my face and, believe it or not, a chuckle I could not adequately explain to my wife.

Which character – as performed by Chris Snelgrove – was your favorite?

Simply put, Kenward. I never thought to voice him with a British accent.

Worst? Catrin and Miss Marin... Can't blame him though!

Of this, I am not certain, though I do know that each trilogy in this series could very easily be made into a film. I would be more than happy to see it in theaters... I normally wait until movies are out for rental via Amazon.

Maybe consider another voice actor, if not 2. There are many females coming into the story soon as well as an ever growing cast of males. Snelgrove surely found it painfully difficult giving all of the characters in this opener a unique voice. It would be near impossible to do the same for the rest of the series.

Caitrin, her cousin Chase, and their friends Osbourne and Strom are farmer's kids, living ordinary lives, until events start to close in on them. Their land is about to be invaded by a powerful and expanding empire, and a religious prophecy is about to come to fruition. Uncomfortably for her, Caitrin, it seems, is the Herald of the return of the Comet, which is the symbol or vehicle of a goddess.

With the Comet becoming visible in the sky, Caitrin now has power, and and this teenager who never expected this is quite convincingly inept and clumsy in her first (initially accidental) uses of it. This quickly gets her a reputation as a witch--the dangerous kind that no sensible person wants around.

And of course, no one believes the prophecy about the invasion until the empire's ships are on the horizon.

Caitrin and her friends' efforts to survive the initial invasion while Caitrin struggles to master her new power dominate this first volume, and we begin to get clues to an over-arching story with a longer history than the four friends suspect.

I like these characters. They're good-hearted and fallible. They have some really smart ideas, and they also screw up sometimes. They don't always do the right thing, but they do always try. Even with traumatic events for the kids, and disaster befalling their land, this is, as odd as this may sound, a very good-natured book, and I enjoyed my time with it. I could quibble endlessly on details. Societies with mediaeval-level technology are not going to have rough gender equality. It's just not going to happen because of the birthrate required to keep those societies viable. If the planet (note that there's some suggestion we may not be talking about Earth) really passes through a comet storm every thousand years or so, there are going to be some impacts that are really not good for life on that planet. Who cares? This is a fun book! Go with it!

At least, I had no difficulty doing so, and these are the kinds of things that often make me quite cranky.

Audiobook, so I almost certainly bought it rather than getting a review copy. In any case, I'm reviewing it voluntarily.

I've already read most of this series, wanted background noise that's better than just music, but less attention grabbing than tv/movies - if that makes any sense. So I like the books enough to want to read/listen to them again. I didn't like the narrator. He was so monotone that it wasn't as enjoyable as hoped. He did well with character voices, and added emotion and inflection there, but the rest of the reading was rather boring, kinda like listening to an automated voice reading. Really glad I didn't pay full price for that audiobook.

Awesome book - Definitely a must read.

Where does Call of the Herald rank among all the audiobooks you’ve listened to so far?

This is my first fantasy audio book so I would have to say #1.

I loved that the story had really great characters that you could relate to and being able to feel the way they do for some of the situations. The story really brings you in.

He did amazing. I loved the voices he gave each character. Wonderful job.

The entire book was fantastic, but if I had to choose one part, it would have to be when Catrin decided to stand against the ships and call out to them, giving them a second chance , making them citizens of her homeland. Showing her power by destroying the ships, but also showing the consequences of using so much force without knowing how to control it.

If I had to critique this book in anyway I would love a little bit more character development as regards to what they look like. I love having to use my imagination to fill in details, but some small picture should be painted for what some characters look like.

It's not a bad story. It kept me engaged but I could put it down. All in all worth the read.

Would you listen to Call of the Herald again? Why?

No. It is well written. I enjoy some stories that are in the YA genre, but I don't think I want to continue with this series. I have more compelling ones in my 'to read' list.

Would you recommend Call of the Herald to your friends? Why or why not?

I would recommend it to any YA who enjoy this genre of fantasy.

Plot holes and no ending; not recommended

With a promising start, I expected more of this story. However, it seemed like parts of the plot were just missing. The heroine suddenly has massive power, but nothing is explained. She accepts it without question. But there is NO backstory at all. Needless to say, the ending was disappointing. I will certainly not be wasting any more time on this series.

The narration was done well with the material he had.

Great tale. Magic and myth always entertain me. The characters are well drawn and interesting. I really enjoyed the narration and am going to continue reading or listening to the series.