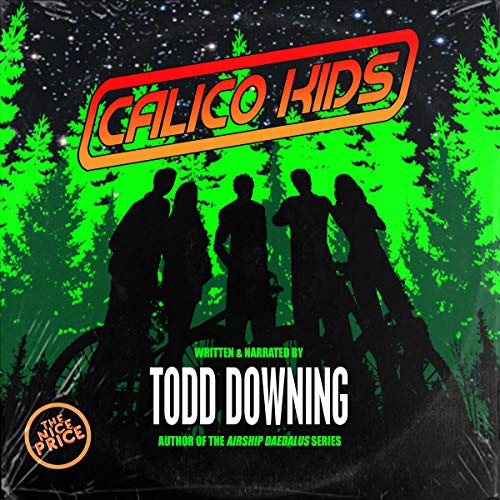 One summer became the adventure of a lifetime.

With a posse consisting of a busboy, a delinquent, an LA transplant, and a cheerleader, A.J. sets out to prove that a Satanic cult is behind the disappearances, all while dodging the local sheriff, high school bullies, and a deputy drunk on authority.

But instead of a dark cult, the group encounters a legion of ghosts, mysterious government agents, alien technology, and an interdimensional crisis of literally Earth-shattering proportions.

From the author of the Airship Daedalus pulp-adventure book series, and adapted from his short story, comes a love letter to retro-'80s science fiction and horror, in the vein of Stranger Things and The Babysitter. Equal parts John Hughes, Stephen King, and Steven Spielberg, Calico Kids is a coming-of-age story set in a rural town, full of impossible adventures.

What listeners say about Calico Kids

Todd Downing uses his knowledge and personal experience from the time period as a well crafted tool. His vocal performance for his own audiobook is as good as the story itself. The ability for him to deploy his first generation dude accent, combined with his spot on for the time period, descriptive vivid language, really makes the adventure come alive.